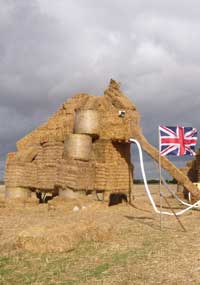 Sculptures of three straw-bale woolly mammoths have been chosen as the winning entry in the NFU/WeetabixWheat Art competition.

The sculptures were created by Paul Grant from Boston, Lincolnshire, who won a £5000 prize in the competition which Weetabix said was created to have fun and celebrate the harvest.

But, in winning the prize, Mr Grant had to overcome a major setback – his original design of a single mammoth was targeted by arsonists and destroyed. 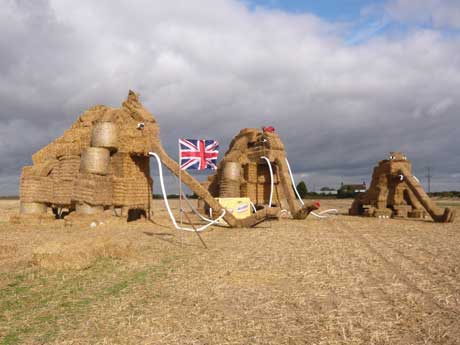 Weetabix chief executive Ken Wood said the judges had been impressed by the sheer originality and effort from the entrants.

“The sculpture of the family of mammoths really stood out, capturing the spirit of the competition perfectly,” said Mr Wood.

“Weetabix has enjoyed a close relationship with their farmers for nearly 80 years and this competition is a great way of showing Weetabix’s continued support for British farming.”

One of the judges, NFU president Peter Kendall, added: “It is important to champion British farming and Weetabix does a great job supporting British farmers.”

There were 10 regional winners who competed for the overall prize. Designs included a teddy bear, a lion, the Loch Ness Monster and Noah’s Ark.