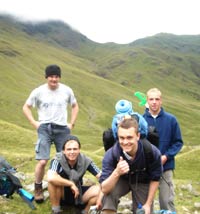 They will be joined by friends Rich Wakelin and Jonathan Brindley in this challenge to raise funds for a local hospice. Starting in Wales on 24 May, they will be making use of overnight ferries to and from Ireland to make the challenge possible.

Matt Eardley comments: “We’re really excited about the challenge; I’m not sure that anything like this will have ever been done before”.

All money raised will go to St Luke’s Hospice, which, being part of the Douglas Macmillan organisation, provides support and care for terminally ill people in north Shropshire and south Cheshire.

Matt and Jack have four London Marathons under their belt already and in 2007 all four completed Wainwright’s 192-mile coast to coast walk in just seven days. But they believe this will be much more arduous.

“The hardest part will be all of the travelling if we are to do it in just four days,” says Richard. “We can mentally prepare for the marathons, but to a large extent the travel arrangements, particularly the ferries, are just an unknown quantity. We will be driving ourselves and because of that and having to catch ferries in the middle of the night we will have a serious lack of sleep.”

Sponsor them online at www.justgiving.com/4marathons4countries4days