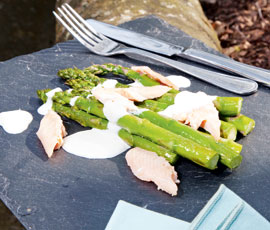 While we are now in desperate need of rain, one of the advantages of the recent heatwave has been the rapid growth of our asparagus, writes Philippa Vine.

We’ve harvested more than enough for our own needs and have been selling the surplus at our annual Bluebell Walk, which has also benefited from the glorious weather with a magnificent display of flowers and a large number of visitors.

Looking for something a little bit different to cook with the asparagus, I have chosen some smoked trout accompanied by a horseradish-flavoured crème fraiche.

The smoked trout has a wonderful, delicate flavour that perfectly complements the horseradish and asparagus.

In keeping with the extraordinarily warm weather we’ve been having, I’ve included a Mediterranean ingredient.

Chorizo is traditionally a sausage of Spanish origin and usually made of chopped or minced pork and fat, along with red peppers and sweet and hot paprika.

I’ve discovered that in a neighbouring village the parents of one of my son’s schoolfriends are curing their own version of chorizo using their home-reared pork and are now selling their produce at local farmers’ markets as Starnash Artisan Meats. Their chorizo is excellent cold, but I’ve used it here with tomatoes and peppers in a baked chicken dish.

When I was testing this recipe, my mother-in-law asked whether she had to wait until it was published in Farmers Weekly to get the recipe, as it was so delicious and something she would love to cook at home.

The rhubarb is also coming along well and hopefully by the time you read this it will be cool enough to think about cooking a crumble.

Pre-heat the oven to 220C (425F, Gas mark 7). Trim the woody stems from the asparagus. Place them on a baking sheet. allowing gaps between each spear, and drizzle with olive oil. Season with the salt and pepper and roast in the oven for about 10 minutes – the fresher the asparagus the less time it takes to cook. Meanwhile, mix the horseradish into the crème fraiche and thin it with a little milk to get a drizzling consistency. When the asparagus is cooked, divide it up and put on a plate, drizzle with the horseradish-flavoured crème fraiche and flake the smoked trout fillet evenly on top.

• 1 teaspoon smoked sweet paprika (not the hot one) 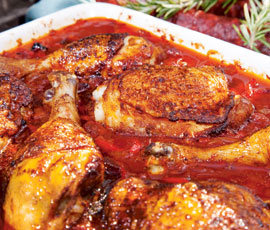 Pre-heat the oven to 180C (350F, Gas mark 4). Peel and slice the onion, peel and crush the garlic, slice the peppers and skin the tomatoes.

Fry the onions in a little oil until they start to turn golden. Put in the garlic and peppers and keep frying until they begin to soften. Chop the tomatoes and add these along with the Chorizo and thyme. When the tomatoes start to cook, add a little salt and transfer the mixture to a shallow casserole.

Dust the chicken pieces with the smoked paprika and fry in the remaining oil until golden all over. Lift the pieces of chicken and lay them on the top of the peppers, etc, skin side up. Pour the red wine into the frying pan with the sweet chilli sauce and stir to lift all the tasty bits from the pan.

Boil to reduce the quantity by one-third and then pour it into the casserole, but not over the chicken skin. Place in the oven and cook for 35-45 minutes until the chicken is cooked through. Serve with fried potatoes and a green salad. 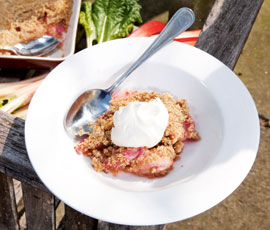 Pre-heat the oven to 190C (375F, Gas mark 5). Cut the rhubarb into 3 inch lengths and place in an ovenproof dish. Sprinkle over the sugar and bake for 15-20 minutes until the rhubarb is soft. Drain off any excess liquid. Mix together the flour, almonds and brown sugar. Rub the butter into this mixture until it resembles – well, crumble! Spoon the crumble mixture over the rhubarb. Sprinkle the top with Demerara sugar, this gives added crunch. Bake in the oven for about 25-35 minutes. Cooking time varies according to the depth of the crumble. Delicious served with ice cream or cream.