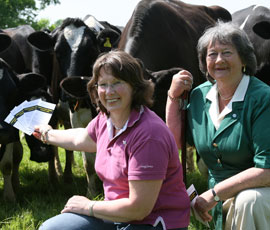 Farmers are being urged to pick up a free medical card at county shows across the UK this summer, to help make GPs and farmers more aware of animal diseases that can be transmitted to humans.

Produced by the Women’s Food & Farming Union (WFU), the pocket-sized card describes the typical routes of disease transmission, symptoms of animal-borne illnesses in humans, and outlines protective measures that can be taken by stockpeople. Useful sources of medical advice are also included on the card, which was financed with help from animal health company Intervet/Schering-Plough Animal Health.

Members of the Devon WFU first produced the medical contact card more than 10 years ago. It was updated in 1992 and again in 2010, but because demand has been so high another reprint has been issued.

“When the card was re-launched last year, we received hundreds of enquiries from the farming community,” said initiative co-ordinator Lynn Askew.

“So many people working with livestock seem to know someone who has had an animal-borne illness, but a great many have had problems getting a prompt and definitive diagnosis from their GP; this can often make the difference between life, death, long-term ill health or a full recovery. On many occasions we have felt like counsellors at the end of a phone, and we hope the cards will help to better inform everyone to the potential threat of disease transmission from livestock to humans.”

According to consultant medical microbiologist Dr Marina Morgan from the Royal Devon & Exeter Hospital, who advised on the contact card content, better information leading to early diagnosis and correct treatment of animal-borne illnesses could prevent serious and potentially life-threatening complications.

“If you are working with farm animals you may well have to remind your doctor about zoonotic (animal-borne) diseases, particularly if he or she has not practiced for long in rural areas. Anyone coming into contact with livestock should use the card to discuss risks when consulting their doctor with an illness. This is because zoonotic diseases can be difficult to diagnose as they often present symptoms that are similar to more common illnesses,” she said.

“Cattle-associated leptospirosis (Leptospira hardjo), for example, is a classic example. Caused by direct or indirect contact with infected urine, the first symptoms often include flu-like illness and headache. But if the disease goes undiagnosed some cases can develop more serious, even life-threatening infection. For example, jaundice, kidney failure and meningitis can develop.”

The medical contacts cards will be available on WFU stands at various agricultural shows around the UK this summer. The cards are also available from specialist agricultural PR and marketing services company ABC. Call 01694 731 777 to request one. Alternatively, visit the WFU website at www.wfu.org.uk

• Our picture shows Lynn Askew (left) and Pat Bown from the WFU, who will be distributing the medical cards at various agricultural shows this summer.