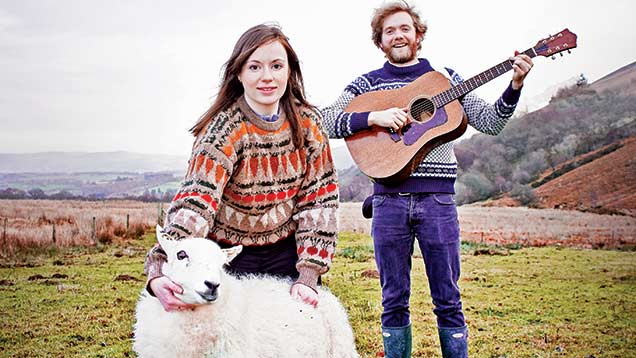 The theatre spotlight falls on Buddug James Jones as she recounts the heartfelt tale of a Welsh farmer’s daughter who leaves behind the farm where generations of her family have worked the land to embark on a new life in the city.

For those of us in the audience who hail from farming stock, the story hits home and we, too, are seized by a yearning for our roots.

Buddug’s soul-searching and anguish as she leads her us through this story are palpable – and with good reason.

This is Buddug’s candid chronicle of her idyllic upbringing on a beef and sheep farm in Wales and her funny, yet at times painful, struggle to escape and let go.

The story will resonate with many young people who leave the countryside to pursue education or careers in towns and cities.

Rewind seven years, and for Buddug there was added sorrow in making this transition.

With her departure came the realisation that she was the reason why the existing generation farming suckler cows and sheep at Blaengwyddon Fawr would be the last.

“Neither my sister nor I chose to farm and when you know your ancestors worked hard to keep the farm in the family, it is a big weight to have resting on your shoulders.

“I could see how hard Dad worked and I felt very guilty and uncomfortable about leaving,” she recalls.

Buddug’s interests had always veered towards the arts, a talent she honed at Young Farmers’ rallies when she was a member of Capel Iwan YFC.

She pursued this interest by accepting an offer to study theatre design at the Wimbledon College of Arts in London.

Although she was excited about the prospect of living in the capital, leaving the community she grew up in was harder than she ever imagined. Loneliness and change made City life hard to cope with.

There is a touching scene where her parents arrive at her digs in Peckham and attempt to convince her that it’s not too late to change her mind.

“As soon as my parents left, I realised how much I would miss home. London living was not what I had expected,’’ she says.

But in the city, there can be unexpected opportunities. While in London, Buddug met an aspiring young theatre director, Jesse Briton, and they became firm friends.

Farming in the theatre

Other plays that have put agriculture on stage:

As is the case in Hiraeth, this play adapted from a book by Michael Morpurgo featured just two actors.

It explored the relationship between a grandfather and grandson in rural Devon and gave insights into the changing face of farming, including a horse versus tractor debate.

Farm Boy not only entertained, it also delivered a valuable message – that the young can learn from the old and the old from the young.

Sussex farmer and Farmers Weekly columnist Stephen Carr had watched this play in a warehouse in London and thought a farm setting would be a more appropriate venue – so he offered to host it at his farm.

King Lear With Sheep featured a cast of one man and his flock and told the story of a stubborn director trying to put on a production of the iconic tragedy with a cast composed solely of the woolly livestock.

It made stars of nine of Stephen’s sheep, whom he described as “perfectly friendly and charismatic’’.

This National Theatre Wales production about the annual cycle of sheep farming was put on in the great outdoors and led the audience on a three-mile trek.

Incorporating local shepherds and their sheep in the cast added authenticity.

This is an autobiographical account of the guilt a pig farmer’s son experiences at leaving the family farm for a new life in the city.

Richard Benson’s childhood in Yorkshire is idyllic, but cracks in the family dynamic start to show once a decision is made to sell the farm.

Richard feels guilty at leaving his family and his parents struggle to know what to do with their lives once the farm has gone.

He was fascinated by the story of her childhood in Newcastle Emlyn and the rural way of life.

“He was keen to know how I ended up doing something creative when my background was in farming. He particularly wanted to know what was going to happen to the farm.

Talking about it made me feel very uncomfortable, but at the same time it was cathartic.’’

She was persuaded that her story had all the elements for a play and, although it would mean laying bare her innermost feelings, she set about writing it.

The theme of the play is aptly summed up in its name. Hiraeth is a Welsh word for yearning or nostalgia for your roots or way of life.

Although Buddug’s story is personal, the performance is a wonderful blend of comical and dramatic dialogue, a tale about staying rooted while letting go.

For anyone who has partied at an agricultural show dance, the opening scene where the tipple of choice is cider and black, and the evening involves pushing over a Portaloo and throwing chips at the chip van, might be disturbingly familiar.

The play explores life in a rural community where all objects and events are “lush” and all inhabitants are “legend”.

Buddug isn’t a trained actress and makes a point of assuring the audience of this at the start of the show. But, in her words, she will “give it a bloody good go’’.

As you might expect when the character is autobiographical, she plays the part of Buddug James Jones effortlessly. Dressed in a knitted jumper with a vegetable pattern, her audience is rooting for her from the start.

We are warned that we must expect to laugh, cry and sing – and we do all three during the course of this 65-minute performance.

While Buddug plays herself, the other actor in the play, Max Mackintosh, has the ambitious task of morphing into the rest of the characters.

And there are many, including Buddug’s parents, Samuel and Bethan, her beloved “mamgu”, her first love, Ed, and even the sheep on the farm.

Max, an actor who hails from Pembrokeshire and also happens to be one of Buddug’s best friends, gives each character a personality, a testament to his brilliant acting ability.

His performance is energetic, so much that at times he is left breathless, and he is hilarious.

Max has even managed to win over Buddug’s parents who have seen the play many times.

“They felt a bit uncomfortable watching it initially because they are seeing my interpretation of the people they are and the times we have shared,’’ says Buddug.

“They had a bit of a shock to discover how I felt about leaving, it never crossed their minds that I had been worried or upset.

“But they love the play now; Mum has even started quoting from it,’’ laughs Buddug.

“My father is a typical Welsh farmer – quiet and unassuming and you never really know what he is thinking. But I know he and Mum are very proud of the play.’’

Mum, Bethan, has also won over audiences at every venue by supplying copious quantities of home-made Welsh cakes.

Buddug will have to perfect the recipe before she takes the production to New Zealand for six weeks in the autumn.

“Mum won’t be there so I will have to take a portable hotplate and make the Welsh cakes myself,’’ she says.

Hiraeth has already triumphed at the Edinburgh Fringe, the Brighton Fringe, the Soho Theatre in London and in theatres and village halls across Wales.

“We have been touring for 12 months and the audiences seem to absolutely love it,’’ says Buddug.

“Many people find the whole experience very emotional because they have been through a similar thing.

Whether they were from a town or the country, they said that hidden tug that draws them back to their roots has never left them.’’

The play has made Buddug revisit thoughts she had neatly packaged away about one day returning to farming.

“I have been questioning if I should farm, but when I think about it logically there is no way I would ever be able to farm.

“My parents always told us that we had been to happy in the career we chose because that is what we would be doing for a big part of our lives. You can’t be a good farmer unless you enjoy it.’’

There has been partial closure because the farmland is now rented out. Samuel is 72 and retired from active farming last year.

“He has just had a knee operation and the farm is quite hilly so it was difficult for him to get around,’’ says Buddug.

“He and Mum started building a new house near the farm eight years ago and they have just moved in.’’