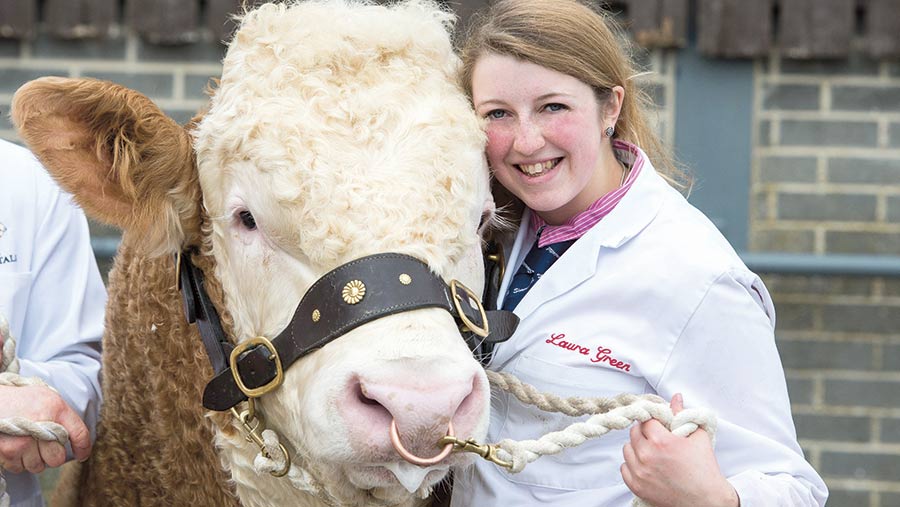 At just 21, Laura Green is not just the youngest judge at this year’s Royal Highland Show (21-24 June) – she’s one of the youngest ever to hand out honours at the prestigious event.

“It’s something I would normally only dream of getting asked to do,” Laura says.

“Getting invited to preside over the Beef Young Handlers class is an amazing opportunity, so I’m really excited, although a little nervous. Once I get in the ring though, I know the nerves will disappear and I’ll relax.”

Although a seasoned competitor in young handler classes herself – and having notched up lots of stock judging experience in other situations – this will be the first time she has judged at a show.

It’s all in the presentation

The SRUC graduate from Morayshire has a clear idea of what she’s looking for. “The young handlers class is about presenting their animals to the best of their abilities.”

“I like to see the handlers paying attention to the judge and being very attentive to – and aware of – the animal itself. If you’re showing, you certainly can’t let an animal see or sense you’re nervous. The handlers should also be dressed very smartly.”

The Green family has strong connections to the Highland Show, having attended for four generations and more recently exhibited with their world-renowned stock, winning the Simmental Champion title in 2014 and the Junior Interbreed titles in 2013 and 2016 with home-bred animals.

This year the family are taking eight Simmentals under the family prefix of Corksie and two under the Garmouth prefix, which Laura founded in 2011 when she was given a nine-month-old heifer called Corskie Clover for her 15th birthday.

“My very first calf under my prefix, Garmouth Clover’s Elderflower, was Reserve Junior Champion at the Royal Highland Show in 2015,” she says. “The previous year, her mother was placed first in her class and together they won Best Cow and Calf in the Simmental section.

“We use Facebook quite a lot, but we don’t really do any advertising, so the event is a great shop window for the business. We also attend about 10 local shows and go to about six pedigree sales a year, mainly Thainstone, Carlisle and Stirling. We also sell a lot of stock privately.”

Laura returned home to work full-time alongside dad Iain on the 1,500-acre family farm after graduating from SRUC’s Craibstone campus last July with a distinction in a rural business management degree.

The course, she says, represented “the best of both worlds”, combining agriculture with finance, economics and management.

“I commuted over an hour each way every day, but that meant I could work on the farm the whole time I was at college. There were times that were incredibly busy – and I came close to missing deadlines on a few occasions but never did.”

The business has arable, sheep and pig enterprises, alongside the cattle – which are her main passion. “I love working with them – you get to know them all and their individual characters.”

It has recently become part of the QMS/AHDB Monitor Farm programme, designed to spread best practice and help improve productivity and profitability. In fact, the farm made headlines recently as the site of a “pants-burying” experiment.

It was a bit of fun, but explored a serious point, recalls Laura. The idea was to bury pairs of cotton underpants in different soils and see how they decomposed.

If they rotted quickly, it would suggest the soil was healthy and full of bugs; if they didn’t, it would show the soil wasn’t the same quality. “STV news came out to the farm. The whole thing went viral.” 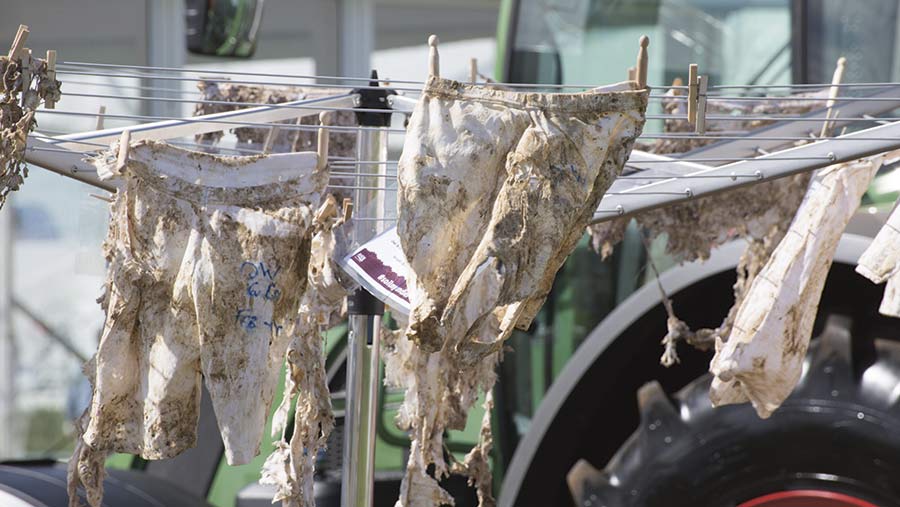 Underpants: the faster they rot, the better the soil. © Tim Scrivener

As well as the “best of the best” in the livestock lines, she’s looking forward to perusing the new technology at the show.

It’ll be a chance, as well, to catch up with old friends, including those she met through the Aberdeen Angus Youth Development Programme, the Simmental Young Members or the Scottish Association of Young Farmers’ Clubs.

“I joined YFC as soon as I could and never looked back. I did everything from stock judging and sports to ropemaking and tug of war.”

She’ll be at the show – which she first attended “as a toddler or even younger” – for the whole four days, staying in a caravan on the site.

“We’ll come back exhausted, but I can’t wait to be a judge. It’s so important to encourage and educate the younger generation in showmanship. It helps them improve their skills, meet new people and gain valuable knowledge in working at a high standard. Young people working at this level bring valuable enthusiasm and new ideas.”

Building up the herd

Meanwhile, Laura continues to build her own herd.

For Christmas 2014 she was given another heifer, Corskie Fame, which went on to win red rosettes at the local shows.

In April 2015 she made her first purchase at Carlisle, snapping up Sterling Verity’s Dumandy, who had Stirling Dumandy’s Glory at foot, for 4,200gns.

Clover has also gone out to produce more stock, including a full brother to Elderflower, Garmouth Iceman who won his class at the Scottish National Simmental Show in 2017.

She also recently bought two in-calf Shorthorns in a bid to meet the demand for bulls for their commercial herd. “It was my idea and, as my dad said, the day they arrived on the farm will be one I’ll never forget.”

And as if all this isn’t enough, she’s also got a wedding to plan – she’s getting married next May.

As for why her and husband-to-be Robert picked that month, well, it’s a relatively quiet time on the farm.

It’s just before first-cut silage, the cows will have gone out to grass, the sheep will have finished lambing and it’s just before the Highland Show. “I’ve got to make sure I’m back from honeymoon in time for that, after all!”