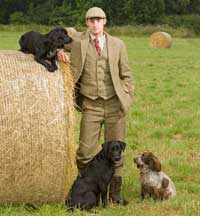 At the tender age of 24, Max Stuart became head keeper at Stradsett, the 2000-acre estate near Kings Lynn, Norfolk, of Sir Jeremy Bagge.

“I dropped Max in at the deep end,” says Sir Jeremy. “It’s a decision never to be regretted.”

The estate is mainly arable with 25 acres of grass and 150 acres of woodland. Max was brought up in a cottage on the estate and, from the age of 11or 12, he did “bits and bobs” for the head keeper Gerald Barfield. It set him on the path of a career in gamekeeping.

“I was really interested in the countryside and wildlife and liked being outdoors no matter what the weather,” explains Max, now 28. “I found it amazing how much a keeper can see and notice.”

Eventually he did two years’ work experience under the head keeper. “I couldn’t afford to offer him a job at the time and he went off to college,” explains Sir Jeremy.

Then Sir Jeremy heard he had been made redundant and offered Max a job on the estate with a view to taking over from the head keeper when he retired. Mr Barfield’s retirement, after 32 years, came earlier than expected.

“I said, ‘Here you are Max, see what you make of it’,” recalls Sir Jeremy. “Gerald Barfield was very good – he stood right back but would give advice if Max asked for it. He has since said that Max has done a good job with the shoot.”

The shoot is a mix of family and let days – “not seriously commercial,” as Sir Jeremy puts it, “but it’s a fact people like coming here. Max keeps a quiet shoot on the walkie talkies and he won’t stand any nonsense.”

Being local, Max knows a lot of youngsters. “If they seem interested I try and get them involved with brushing (beating) and tell them to bring a friend. I try to keep them with me so that they can see what a shoot day is all about,” he says.

Bought in as poults, pheasant, French partridge and some duck are released. Max has increased shoot days from 14 to 20-22 with bags for driven days of around 200 – occasionally 275 – and casual spinney days of around 100 head.

There’s evening flighting on the 26-acre lake that also draws in wild pintail, pochard, tufted duck and widgeon. Max has increased to 25 the number of drives he has to choose from and has reshaped some of the original ones to good effect. Return on birds is around 40% for pheasant and partridge, 85-90% for duck.

“I can’t see much more expansion as there is a limit to what you can do and I don’t believe in swamping the ground with birds,” says Max, adding that two fast roads by the estate take a toll on the birds equivalent to another day’s shooting.

However, he intends to try to introduce grey partridge under a fostering system. “I will work with the Game Conservancy on that and Sir Jeremy will back me all the way,” says Max.

He keeps a tight reign on vermin to benefit the farm, game and wildlife. “If you want wild birds to survive, you have to be hard on things that will take their eggs,” he says.

This season he will be working with the Game and Wildlife Conservation Trust on French Partridge research. “They will put some radio trackers on the red legs and see what they get up to,” explains Max.

He encourages the birds to over-winter by keeping the covers up and feeding until May. “It’s good for the game and for all the little birds too,” he says.

He has expanded most of the pheasant release pens and changed all the watering to automatic systems rather than troughs. He has recently made 18 new partridge pens complete with nipple drinkers.

Max is very conscious of the environment and conservation and has tried to spread the word by helping man a CLA stand at the Royal Norfolk Spring Fair.

He has fought his corner to retain set-aside strips on the estate, in danger of being ploughed up, and has gained extra plots that have proved too wet to farm

He works all the game plots himself and is providing more game cover. He works with Kings seed merchants to select wild flower, pollen and nectar mixes to encourage greater insect life and a better start for game chicks and other wildlife and has brassica and other cover crop seed mixes specially designed to suit the estate.

He has cut “paths” through set-aside plots to provide areas where the birds can get out of the long grass to dry off and is monitoring the benefit of this against other sites where the grass has been left uncut.

Stradsett is already in a tree-planting scheme and, where woodlands have been cleared, hundreds of quick-growing bushes have been planted to act as windbreaks.

The estate is going into Entry Level Stewardship and Max has had a hand in the planning for this. The adviser, Sir Jeremy, farm staff and Max spent several hours discussing the possibilities.

“We all put our ideas forward and I am really excited at the benefits it will bring to the shoot and wildlife. It will be managed just as I could have hoped and will benefit everything,” says Max.

“It’s a privilege to be a keeper and I look forward to every day because no day is ever the same,” says Max. “I am lucky, I have a good boss who has put his trust in me.”

The winner of the Gamekeeper of the Year competition will be announced in Farmlife and here on FWi on 24 July.

For more details of the CLA Game Fair, go to www.gamefair.co.uk