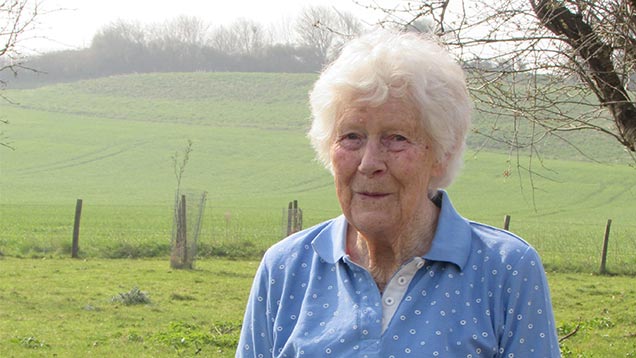 “I’ve had two knee replacements,” Win Foot confides as she swings a leg over the wire fence into the sheep field next to her house to check on some lambs born earlier this spring.

“And a heart operation,” chimes in her son Chris, who runs the family’s 220ha (540-acre) arable farm at Bere Regis, Wareham, Dorset.

“That was in the February. She was back driving the combine the same summer.”

See also: The One Show celebrates agricultural salesman working at 96

Win, 86, has worked the land at Haywards Farm for more than 60 years. She moved to Dorset from Somerset in 1955 after marrying her husband, Alan. They started with 30ha (76 acres), milking a small herd of dairy cows and rearing calves for replacements.

The herd grew quickly, as did Alan and Win’s family. “I was often milking 60 cows with three small children playing in the dairy or the pram,” she recalls.

As Sally, Jenny and Christopher grew up they helped on the farm, collecting eggs from 3,000 battery hens bought in 1962 and later, as teenagers, carting and stacking straw after harvest.

Win was responsible for lambing, worming and foot trimming 400 ewes each year, as well as rearing 100 beef calves “on the bucket”. She helped out with silage making, making the heap with a Leyland and a buck rake.

When the Foots took on another 40ha (100 acres) in 1972, Win was kept busy at harvest, corn carting and running the grain drier, sometimes all night in wet years, she remembers.

The best of times…

Harvesting in a hot summer and getting a chainsaw in 1979 to help with hedge-laying and cutting firewood.

The worst of times…

In January 1963, after huge drifts of snow blocked the road for more than four weeks, having to dig out the milking parlour by hand to milk the cows in freezing temperatures.

Win has turned her hand to pretty much every kind of farm work. She reels off the tasks: “I’ve done most jobs – ploughing, sowing, fertilising, sheep shearing, hedge-laying…”

In fact she is a prize-winning hedge-layer: the only girl to enter a Young Farmers’ competition in 1947, she carried off second prize while her 16-year-old younger brother, William, won the Champion Cup.

As recently as 1989, Win planted 600 trees to create a copse on the hill behind her converted barn on the farm and she has taken trouble to pass on her forestry skills, teaching the farm’s tractor driver Darren to lay hedges.

This spring, while laying a roadside hedge, Darren got lots of job offers and praise from people driving by. “He started working here when he left school in 1984 and after 31 years he is like one of the family,” Win says.

Win’s combine driving career only really began in the 1980s, when she would take over from her son Chris during his lunch hour. “From then I did a bit more every year,” she says. “Once you’re in the cab, it’s hard to get you out again,” laughs Chris.

The air-conditioned cab and bank of controls in today’s Claas is a far cry from the farm’s first second-hand, cabless Massey in 1963. It’s an even bigger leap from Win’s early days farming.

Born Winifred Reed in June 1928 on a farm near Bridgewater, Win moved, aged three months, to a farm near Castle Cary, 25 miles away.

“My father [went] in front on horseback driving the cows, my mother behind driving a horse and wagon-load of furniture with my three-year-old sister, Gladys, and me. Grandfather came behind with another horse and wagon of tools and farm implements.”

Work began young for the three children (Win’s brother William was born in 1931). “My father, not having good health, got us working at seven or eight years old,” Win says. “We cleaned out poultry houses, swept up the yard, pulped up mangels, cracked up cakes of linseed for the cattle and helped mother and father with hand milking.

Life was undoubtedly hard. Win remembers fetching water in buckets from a spring in the hedgerow 100 yards up the road before mains water was laid to the house in 1940. “We had no electric or phones, we used candles and oil lamps indoors and lanterns outside for milking.”

“We had no electric or phones, we used candles and oil lamps indoors and lanterns outside for milking” – Win Foot

The children cycled four miles to school, even walking in the snow. The one luxury was a pony and trap ride to Sunday School with the daughter of the neighbouring farmer.

Machinery over the years

Mechanisation came slowly: a Fordson tractor in 1935 for chain harrowing and rolling, an Alfa Laval milking machine in 1939, and two more Ford tractors by 1942. But when Win left school at 14 and started work on the farm full time, the family were still using horses on the farm and the work was back breaking.

May was spent hand hoeing mangels, Win recalls. June was haymaking: raking dried grass into rows with a horse rake, sweeping it up into heaps with a sweep on the tractor (often driven by William, aged six), then tossing it on to the hayrick with long-handled pitch forks. They had no elevators until 1943.

Harvest also meant heavy manual labour. “Before the war, my father cut round cornfields with a scythe,” Win says. “We had to bundle and tie up the corn.”

Changes with the war

But the Second World War brought a push for production and new opportunities seized upon by Win.

“Everyone who had suitable land had to plough it and sow corn,” she recalls. “My sister and I cut ours with a tractor and binder, then went round several local farms cutting theirs.

“We made the sheaves of corn into ricks, 10 or so every year. Father used to thatch so he taught us all how to thatch. In the winter the thresher came in, driven by a steam engine, and we had to get in a supply of coal.”

The corn went into sacks: wheat weighed 2 1/2 cwt , barley 2 cwt and oats 1 1/2 cwt. “My sister, brother and I carried them from the trailer into the barn and staggered out again with them on our backs to the lorry when it was sold,” Win recalls.

She also delivered hundredweight bags of home-grown potatoes to town, cleaned out the cattle in their stalls by wheelbarrow each morning and broke in carthorses before they were sold.

Winter was spent hedge-laying. Even to this day, Win remembers that American GIs stationed nearby cut holes in the hedges to hide ammunition leading up to D-Day.

The war also brought help: two German prisoners of war worked on the farm from 1944-47. Win’s father collected them in a pony and cart each day from their camp three miles away. Ladies from the village also came up to the farm to help pick peas and potatoes.

So much has changed in her farming life but Win’s close-knit family has not. She lives next door to her daughter, Jenny Franklin, and her son Chris is just up the road. In total, Win has five grandchildren and six great-grandchildren.

Win with her son Chris and granddaughter Emma

Win makes light of her unusually active life: for her, farm work is normality for women as much as for men. She even likes her name as short and workaday as possible: it’s Win, not Winifred.

She had no truck with the “old men” who sneered as she laid hedges at the Young Farmers’ competition back in the 1940s and today, while she is obviously proud of her granddaughter Emma, an agronomy student who works alongside her in the summer corn carting, she is not going to make a fuss about it.

When not cultivating or combining, Win tends the garden she and her husband have created, selling bedding plants and homemade chutneys and jams for charity and baking cakes for a local residential home run by her daughters Sally and Jenny.

Keeping busy also means Win keeps largely mum on modern developments. But she continues to embrace new experiences: one of the benefits of age, she says, is seeing how things have changed over the years, from horse and cart to tractors that can steer themselves. But she does allow herself just one wry comment as I leave: “They don’t work as hard as we did.”