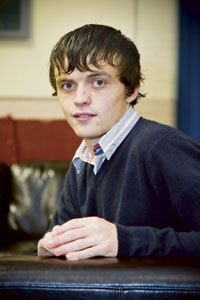 It appears that my flatmates have recently developed some sort of vendetta against me.

One of them in particular has broken at least three bits of my crockery in as many weeks. Perhaps it’s karma. After I’ve been cooking Sunday lunch, you really don’t want see the charred remains of what passes for washing up.

Away from the kitchen, a (comparatively welcome) return to lectures marked the end of the winter exam season – though not before a rather embarrassing roller-disco in the sports hall.

I should explain that the only other time I have ever been skating ended with a trip to A&E to have my skull X-rayed.

I need to apologise to the people I knocked over as a consequence of my awful sense of balance. I also now concede that wearing a luminous orange T-shirt with my name on the back was perhaps a mistake.

In the classroom, this semester includes modules such as Agriculture and Food Marketing, World Agro-ecosystems and Communicating Biosciences – the latter a module specifically designed to teach effective journalistic, presentation and teaching skills.

A few of us are also doing a module called Environmental Plant Stress – basically about how a plant responds at a physical and biochemical level to things such as drought, flooding and excess salt. I’m surprised that more people aren’t interested in this area because breeding varieties resistant to these factors will play a big role in farming in the future.

The list of optional modules was huge, so picking which ones to do was quite a challenge. You can really take your degree in a direction that interests, though I personally think it is important to have a good mix of fundamental science and real-world skills.

Back at home, things are normally pretty dead this time of year so I haven’t returned since the New Year.

In my last posting, I said that our sugar beet had all gone off to the factory. Clearly, at the time, I did not know just how fortunate we had been.

Our contractor lifted the remaining majority of the crop just two days before the bad weather started, and anything lifted “post-snow” in the area seems to be either poor or completely unproccessable.

To say we were lucky would be an understatement, and many of our neighbours have lost a large percentage of their quota.

Those of an early-lifting disposition may well say that this is the risk that later harvesters take, and in a normal year they would at least be partially compensated by higher yields and a late delivery bonus. But what they have to remember is that the late-lifting growers in effect allow those who harvest early to deliver their beet in reasonable time, and this is the problem with closing factories and spreading the processing campaign over such a long period.

Of course, everyone would like to have their quota in the factory by the end of November, but sadly this is not possible.

What many growers, contractors and hauliers have been left with is a financial hole, an un-cultivatable mess and a compromised seed-bed – all at a time of shrinking beet prices and increased cereal margins.

Though one bad year won’t deter the majority, we all hope that support is given to growers who would otherwise go the way of University Farm and drop sugar beet from the rotation altogether.

Back at Sutton Bonington, the Agricultural Society has kicked off 2011 with a subject dear to our hearts – real ale. Castlerock, brewers of the Supreme British Champion Beer, very kindly welcomed us to their main brewery in Nottingham for the evening.

It was really interesting to see how the combination of malts and hops make different characteristics of beer and, even though they’re a comparatively small company, their outfit was still much bigger than I was expecting.

We rounded the evening off with a trip to a restaurant that has a canal actually running through the middle of it. Given that by this time we had all had a sample of Castlerock’s fine range, it was perhaps thankful that no one fell in.