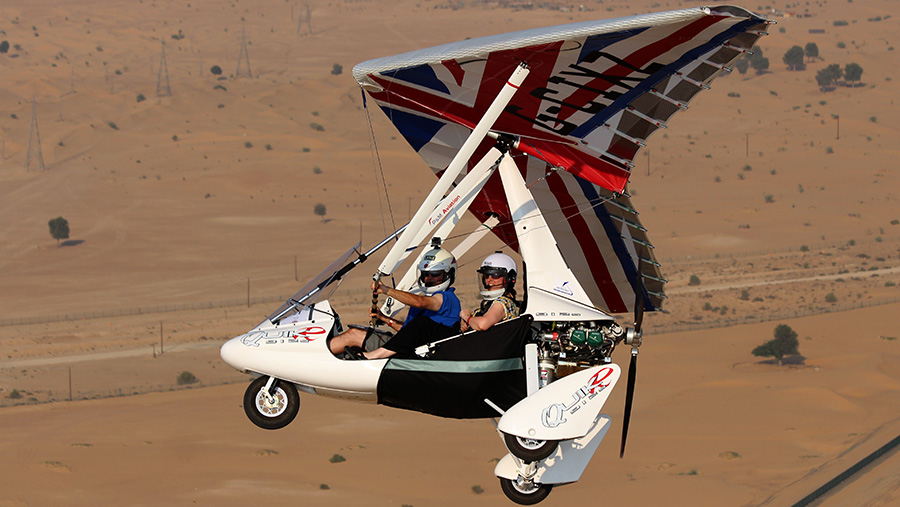 Farming is an occupation synonymous with bad backs, so it was no surprise to hear a Buckinghamshire farmer once slipped a disc.

What is surprising is the chain of events the painful injury triggered, culminating in him being crowned British Microlight Champion 2015, followed by a fourth place finish in the World Air Games in Dubai last December.

A third-generation tenant farmer at the Claydon Estate’s 154ha Bernwood Farm, Botolph Claydon, Mark Fowler was at one time a very keen windsurfer.

An adrenaline junkie with a competitive spirit, the water sport ticked both boxes until the back injury.

“I just couldn’t carry on at the level that I wanted to anymore,” explains Mark.

For several years he was under his wife Sue’s feet, unable to sit still. Tired of his fidgeting, she got on the phone to a microlight instructor and booked a taster flight.

“We went out on a gorgeous June summer evening and that was it, I was hooked – that was 12 years ago,” says Mark.

Within 10 months he was a qualified pilot after taking the required written and practical exams, which cost about £3,000.

“Generally with most farmers, if we have a key we can get something moving as we’re used to many bits of kit.

“Once you are in the air it’s dead easy, it’s just landing the little blighters.”

He bought his first microlight soon after qualifying and flattened off and grass-seeded a runway in the field next to the farmhouse, which sits high on top of a hill and launches the aircraft out over the rolling hills of the Aylesbury Vale.

From there, Mark flies about 150 hours each year and its central location allows him to explore the huge diversity of England’s landscape, with his microlight having a range of about 400 miles.

Most of his flying is done in the spring and autumn months, with his microlight cockpit traded for the cab of his New Holland combine, which cuts both his own and a nearby farmer’s crops.

“Sunrises and sunsets can be spectacular, particularly when heading over Oxford early in the morning – you see those Cotswold stone spires lit up in the morning sunshine and you just wouldn’t get to see that from the ground.

“Once you have tasted flight, everything else is pretty boring – it just isn’t like anything else.

“You get a real sense of freedom, you feel your heart and body lift and you can empty you mind – it is a big stress relief,” he explains.

In addition to admiring the beautiful English countryside, Mark was able to keep a bird’s eye view of his wheat, oilseed rape and oat crops long before drones became all the rage.

“You can also see how others are doing around the country and have a good idea of whether crops are good or bad.

“It tells you if you should sell forward or not.”

While pleasure rides and keeping an eye on crops appealed to the inquisitive side of Mark’s nature, there was still an urge to challenging himself beyond cruising the countryside.

After getting about 300 hours flying time under his belt, he spotted a microlight competition advertised in a specialist magazine and entered.

Microlighting competitively involves navigating around a course marked on a map with accuracy and precision to score the most points.

He says that he learned a great deal about his ability, his plane and what it was capable of in the air and it gave him a lot of confidence in challenging situations.

“It taught me how little I knew and improved my skill and safety. I had an engine failure once and it didn’t phase me at all. I feel competent enough now to go anywhere.”

As his confidence grew, so did Mark’s performance in competitions and he was crowned British Microlight champion 2015 and reckons this is his greatest achievement so far.

Domestic success then opened the door for him to compete for Britain in the World Air Games, which were held over the marina and desert around Dubai in the United Arab Emirates last December.

It is conducted under the rules of the Fédération Aéronautique Internationale (FAI), and pitches pilots from all over the world against each other in many different air sports, with microlight pylon racing added for the first time in 2015.

Pylon racing is against the clock, with pilots having to perform steep ascents, descents and turns.

Mark likens it to the Olympics of aviation and was a steep learning curve, with only three practice runs before the competition started, on top of flying around trees at home in the UK.

“You are flat out, just 50-100ft off the ground or the sea and the pylons marking the course just 300m apart.

“The bank angles are in excess of what the aircraft is approved for outside of competition and you can get up to 4G [g-force] around the tightest bends. I was glad to get home in one piece,” he says.

Each competitor had five competition runs, with the best three times taken. It was a great event for Britain, with the six British pilots taking the top four spots and also sixth and eighth.

The aircraft used by the top nine finishers were also all British designed and built.

Mark says the backdrop while swooping around the course was stunning and flying in such close proximity to a built up area is almost impossible in the UK.

“We were out there for about two-and-a-half weeks and it is definitely the highlight of my flying career so far.

“The European and World Championships are in August and, because of harvest, I would never have the chance to go.

“This was the first chance I had to fly against international pilots, so to come fourth wasn’t bad.”

As for other farmers looking for a hobby, Mark thoroughly recommends taking up microlighting and says if you have the spare ground, time and are willing to go back to school, anyone can do it.

“The bank angles are in excess of what the aircraft is approved for outside of competition and you can get up to 4G [g-force] around the tightest bends. I was glad to get home in one piece”
Mark Fowler

After investing in the equipment, it isn’t too expensive either, as many will have ready-built storage for the aircraft and the airfield can be on the doorstep.

“The biggest running cost is about £900/year for insurance, then £200/year for a permit, which is like an MoT for planes,” he explains.

In terms of skills, he reckons you have to be calm and unflustered, aware of the situation around you and have an instinctive nature with machinery, which most farmers have in abundance.

“I’m not looking forward to the day I have to give up flying. Hopefully I’ll be in a box soon after that.”