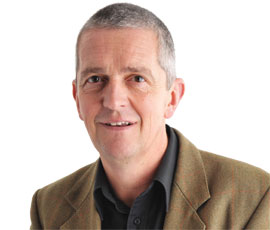 As the clocks go back and the long dark nights start to take hold, the end of 2012 is firmly in sight.

No doubt we will soon be witnessing the first signs of Christmas. These festive portents seem to appear earlier every year in north-east Essex. My neighbour reckons its one of those seasonal adjustments connected to climate change. Mind you, he’s the same neighbour who thinks we shouldn’t turn the clocks back because the crops grow better in lighter evenings.

Like most farmers, I’ll be happy to see the back of 2012. It’s been what is commonly known round these parts as a “right pig” of a year. A seeming 52 weeks of relentless rain with hardly so much as one dry week in which to get farm jobs up to date.

Before 2012 I had never faced the task of pulling out a stuck combine. This year it happened six times. Inspired by the encouragement of Lord Coe and his Olympic committee, it looks like I have ensured there will be a legacy from 2012 on this farm. Those chasm-like ruts that now criss-cross my fields will probably still be there when Team GB are performing in Rio.

The trouble is when we start to moan about the weather to the non-farming community, we reinforce a rather negative farming stereotype that we would do well to kill off.

The source of this rather miserable reputation is probably rooted in the fact that many farmers are conditioned by the experience of living rather close to the precipice. The maths is simple: every generation the number of farmers halves; that means a good majority of us work and live in fear of having to throw the towel in. For many, bad weather is the straw that can break the back of the already distressed camel. Hence our sensitivity to it.

As a quick aside, let me address the question of how I calculate this 50% loss of farmers over a 30-year period. Admittedly it’s very tricky to prove because no one keeps sensible stats on the issue, largely because it’s difficult to define what a farmer is, let alone accurately counting them every so often. So, in the absence of a better indicator, I tend to look at NFU membership. In the early 1950s, it exceeded 210,000. By the early 1980s, it was hovering around the 110,000 mark, and today it’s 55,000. Seeing as the NFU can reasonably claim to have continually represented 70-80% of English and Welsh agriculture, it’s not a bad yardstick by which to measure declines in farmer numbers.

So the conclusion is that most farmers have good reason to moan about bad weather or bad prices because it pushes many of them towards that heartbreaking decision of selling up.

For me the catch-22 in all of this is that moaning does nothing to alleviate the problem. In fact I’d go further by suggesting it can exacerbate things and hasten our demise. Industries that present themselves as down trodden and hard done by risk making a self-fulfilling prophecy. In contrast, industries that see themselves as going places tend to meet their own healthy expectations. A simple example of how this works is recruitment.

Only underachievers would be attracted to an industry that appears to be underachieving. Dynamic youngsters want to work in industries that appear dynamic.