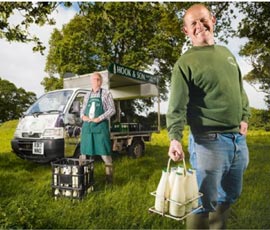 A movie starring East Sussex farmer Steve Hook and his herd of 75 dairy cows has received more than £20,000 funding to bring the film to UK cinemas.

In just under a month, The Moo Man received £22,740 from a total of 580 backers on Kickstarter – a popular crowd-funding website.

Donations exceeded the minimum film production budget of £20,000, which will enable the film to be screened in cinemas from 12 July. All further donations will be used to promote the 90-minute rural drama.

As a thank-you for their donations, investors received a themed “thank-you” from the film’s leading lady – a cow called Ida. Depending on how much they pledged, investors could receive a ringtone, a poster, a signed print of Ida, an invite to a special gala screening and even a visit to Mr Hook’s Sussex farm.

Mr Hook, an organic dairy farmer passionate about raising awareness of the industry, opened his gates to directors Andy Heathcote and Heike Bachelier to film the documentary over four years. It premiered at the Sundance Film Festival in Utah earlier this year, where it received countless positive reviews.

The film explores the relationship between a farmer and his animals, and illustrates the hard times had by small-scale dairy farmers in the UK.

“All the basic costs are now covered, but if we can go on and reach £25,000 we can shout louder, further and wider about our farmer and his wonderful cows,” wrote the filmmakers on Kickstarter.

“How great would it be to see posters of Steve and Ida on the London Underground? Let’s help even more people out there realise that great farmers, quality food, happy cows (and great films) are important to us all. The more we can raise, the further this heart-warming film will travel.”

You can help make “moo-vie” history by going to the Kickstarter website and searching for The Moo Man.

Animal extras star on the big and small screen