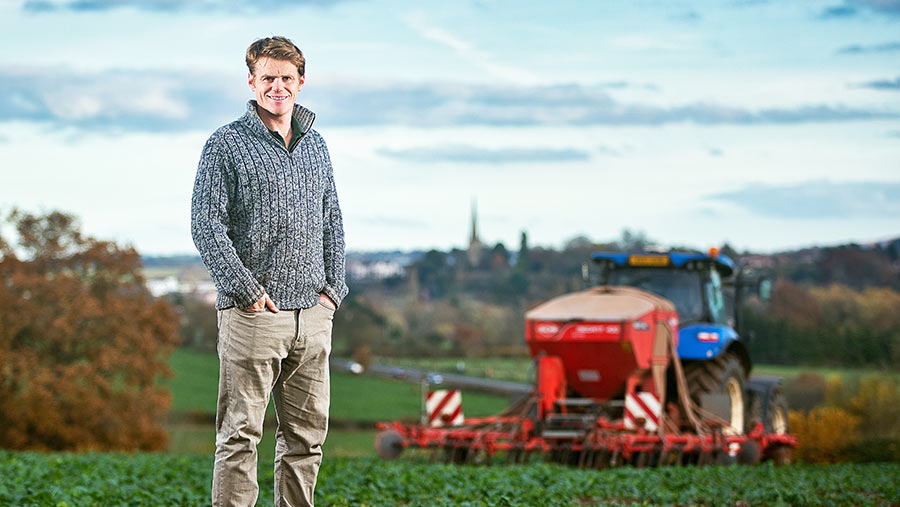 Three British farmers are showing the reality of 21st century agriculture to a whole new audience via the TV show Born Mucky: Life on the Farm.

Tom Martin in Cambridgeshire, Ally Hunter Blair in Herefordshire and Shropshire-based Ian Steele are appearing in the series, which premiered on Sky’s Quest channel.

The programme “goes behind the scenes to capture the reality of life for modern-day farmers in rural Britain, and the resilience and commitment required to keep farms thriving”, according to its makers.

See also: Some of the best Britain’s Fittest Farmer 2020 entries so far

“Farming is one of the most unreliable, precarious careers possible,” said Mr Martin, in one episode.

“It’s akin to being a habitual gambler – it’s tremendously dangerous, there are issues and problems around every corner.”

Another episode follows Ally Hunter Blair – who, at the age of 25, became the Duchy of Cornwall’s youngest tenant – as he prepares to sell some old kit at auction.

“I thought we had a nice pile of scrap, but we may have a few hundred quid here and there – it all helps,” said Mr Hunter Blair.

A spring-tine harrow, a Dutch harrow and a potato spinner were among the items of “long-forgotten hardware” that ended up going under the hammer at Kidderminster Machinery Auction.

James McIntyre, an auctioneer at Halls Kidderminster branch, said such items can prove to be worth much more than expected and could raise funds to contribute to the costs of the Hunter Blair’s recent luxury glamping diversification.

“Our machinery auctions, which can include around 800 lots per sale, are a welcome opportunity for farmers to dispose of unused equipment and for canny bargain hunters to snap up perfectly good machinery for a song,” said Mr McIntyre.

In the end, the potato spinner sold for £190, a potato elevator, which hadn’t been used for more than a decade, went under the hammer for £980, and a mower – unused for 20 years and which originally cost £400 – sold for more than the family had originally paid for it.

In total, Ally – who took over the farm eight years ago – and dad, Graham, netted about £3,500 at the auction.

“The year I took over the farm, 2012, is renowned now as the worst summer in history,” added Ally.