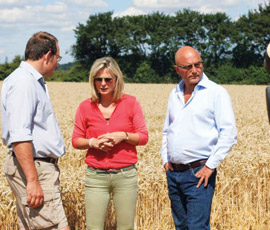 Farming will be centre stage in a new primetime TV show.

Harvest, a BBC2 series due to begin next week, could help rebuild links between food producers and consumers.

It will, according to the broadcaster, reveal the secrets behind the culmination of the UK crop-growing season, and shed light on British farming and its contribution to our food. It will also represent an early harvest report for what could be the first time on national television.

“Back in the eighteenth century, the annual harvest report was the most important document in Britain, as it was a reflection of the country’s wealth,” says series producer Steve Evanson. “Today we’ve lost that connection between the people that live in this country and the food grown here, and we hope that Harvest can help change that.”

To create the series of three one-hour programmes, a team from the BBC followed farms over the course of a year, to paint a picture of which crops are grown in the UK. Specialist fruit, vegetable and arable producers each form the backbone of a separate episode, alongside scientific explanations of concepts that are less widely understood outside the agricultural world, such as pollination.

Unlike some agriculturally themed television series, which have been accused of romanticising farming and focusing on niche, small-scale producers, the BBC team were only interested in commercial-scale producers selling direct to the supermarkets.

Fletchers Farm near Colchester, Essex, was chosen as the arable holding for the series. It is run as a partnership between David and Alison Bradshaw and their son Tom, who contract farm 1,457ha from six different landowners, alongside their own 160 acres.

While their range of production includes oilseed rape, winter and spring malting barley, milling oats, fava beans (for export) and marrowfat peas, it was their wheat crop that the BBC chose to be the star of the show. During August the team filmed Tom and his colleagues running two combine harvesters to bring in 82 acres of wheat over two days. The field in question yielded 8.5t/ha (3.4t/acre), 15% down on the average yield, but it was precisely such ups and downs of farming that the BBC wanted to document.

“It was just an incredible experience – I could not believe we had 20 people on the farm to film the harvest coming in. You sit and watch these things on TV, but you’ve just no idea what goes into them behind the scenes,” explains Tom. “We were so lucky with the weather during that main field work. The filming definitely slowed things down for us, but it was all worth it,” he continues.

The producers chose to meet Nuffield scholar Tom after reading his paper on soil fertility, and decided that his infectious enthusiasm for British farming was just the kind of personality they needed for the programme. Part of the wheat harvesting was filmed using a remote-controlled helicopter, and it looks as though the series will capture the drama and satisfaction involved in harvesting crops that is often only felt by the farmers.

“The aim is to give the viewer a live experience of harvest. In terms of providing a chance to educate the public and show off what farmers do to produce our food, I cannot imagine a better opportunity,” says Tom.

Meanwhile, Lower Hope Farm in Herefordshire was selected as the fruit farm. As one of the country’s leading cherry producers growing around 420t from its 324ha site, it certainly had the commercial scale of production the TV crew were looking for. Over several visits the BBC team covered key stages in the fruit cycle, from winter chill hours through to the June drop (where each tree naturally sheds a proportion of its immature fruits). Fruit manager Andy Hunt had few concerns about getting involved once he met the BBC team.

“They were particularly interested in how the modern-day farmer is reliant on nature and the weather, and how understanding this is crucial to farming successfully in the UK. They were so keen, so well-researched and very interested in the detailed science of food production. My philosophy is that any experience is good experience as long as you learn from it, and it’s been really interesting.”

Meanwhile, Cambridgeshire-based Produce World, farming 4,000ha of vegetables from joint ventures and grower groups, had exactly the type of agricultural technology the TV crew were after.

“Our field factory, which has our broccoli weighed and pre-packed on a tray within 60 seconds, fascinated them, and they also filmed our winter carrot harvest, which involved seven or eight tractors to get the job done through the snow,” explains director of agriculture Andrew Burgess. “We got involved as we thought it would be good for our business profile and a chance to promote what is great about British farming. The big challenge was using language that was not too technical. I hope other farmers think we’ve done a good job.”

Harvest, presented by Philippa Forrester and Gregg Wallace, will air on BBC 2 on Wednesday 11 and Thursday 12 September at 8pm and Friday 13 September at 9pm.