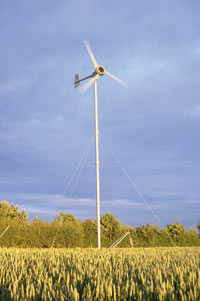 It’s clean, renewable and it’s free – wind power is ours for the taking. Well, almost. Turbines can be expensive to buy, the pay-back time can take a generation or more and there is a mountain of paperwork to do to obtain permission for them to be there in the first place.

But all this could change now that the government has fallen in line with several other EU states and introduced a feed-in tariff payment (ie a set payment threshold) scheme for producers.

This will come into force in April next year and will provide electricity producers with a guaranteed payment of about 23p for each unit of electricity made – irrespective of whether or not the electricity is used by the producer. An additional payment of 5p/unit will be made for surplus electricity exported to the grid and there will also be a saving of up to 14p/unit for the electricity not being purchased.

So, what needs to be done to get a slice of this action?

For starters you have to farm in a part of the country where the annual average wind speed is at least 5m/s – about 11mph – which means being in places like the west coast of Scotland, Wales or in Cornwall in the south west.

To achieve the best results, the wind also needs to have an uninterrupted, smooth flow free from the influences imposed by buildings, trees and hills.

For those fortunate enough in having what has been described as this “oilfield in the sky” the next step is to have a site survey to find out just where the best position for a turbine would be in respect of wind flow and accessibility for delivery lorries.

It is also the time to decide on what type and size of turbine is going to suit requirements.

According to wind turbine supplier and adviser, Ben Cosh of Bristol-based The Green Company, many opt initially for a 6kW turbine which is about as small as it gets for a viable generator. “Very often it makes better financial sense to go for a higher capacity generator which has a shorter payback time and the potential to earn more money from exported electricity,” he says.

“The initial outlay for a Canadian-built PGE 50kW turbine, for example, is about £250,000, which may appear steep, but in a 6m/s wind speed area income could be about £52,000 a year. This would allow for a payback within six years and a means of servicing the initial finance requirement.”

But whatever the size of wind turbine you select, planning permission is a mandatory requirement. Areas with bat colonies, or where there are likely to be visual and/or noise problems, can be difficult as can greenbelt sites, Sites of Special Scientific Interest (SSSIs) and close proximity to airfields.

Obtaining planning permission can take several months and cost up to £20,000, and there is always the risk of rejection.

Other hurdles to overcome are possible objections from the local Distribution Network Operator which controls the wires and the Ministry of Defence which, along with the Civil Aviation, may raise some concern over radar interference as the turbine blades rotate.

About a year on then and, if all has gone well, the foundations can be dug and the mast and its turbine winched skywards – a hinge at its base allows for easy lowering when maintenance is required.

The cable taking the generated electricity to the control box needs to sufficiently thick to prevent any loss of power and needs to be armoured three core cabling sunk to a depth of 60cm in the ground.

On arrival at the control box the electricity will be converted to grid AC with a meter recording the amount of electricity produced and another to record how much electricity is being exported to the grid – rather than used on site.

For those who have ever wondered how you get electricity into a grid, the electricity being exported is of a slightly higher voltage so it reverses the flow.

“Maintenance is a big issue with wind turbines,” insists Mr Cosh. “I generally advise that 10% of revenue is put aside to cover maintenance costs.”

He adds that there is also a case for turbines being equipped with a self-diagnostic system that can continually monitor and identify potential problems so remedial action can be taken before things get too serious. Most turbine manufacturers aim for a design life of 20 years.

Domestic and business electricity consumption has its peaks and troughs, so at some times in the day there may be a deficit in the amount of electricity being produced by the turbine. When this happens the system tops up its requirements by drawing on the grid supply. At other times there could be a surplus of electricity which is then exported to the grid. It’s all pretty seamless in its operation.

Feed-in tariffs, which are due to come into effect in April 2010, guarantee a price for all electricity produced of 23p/unit plus a further payment of 5p/unit for the surplus electricity exported. There will also be a saving of about 12p/unit for the electricity that would have been purchased,

The scheme which is guaranteed for 20 years, but payments reduce by 3% year on year. 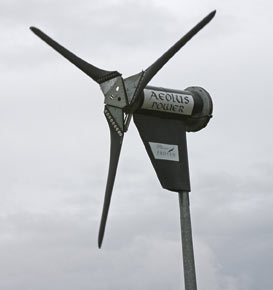 This an example of a turbine which has automatic blade control for safe operation in all wind strengths. Built by Proven Energy, it is marketed by Bristol-based Aeolus Power. This company offers a whole range of turbines starting at 6kW.