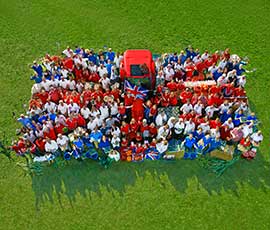 The NFU has launched an online campaign that aims to get the public more engaged with farming by showing people who work in the sector.

As part of its Back British Farming campaign, the union has created a Union Flag made up of about 200 farmers, their friends and families, which is being circulated using social media channels.

Click here to see a full-size and interactive version of the campaign picture.


“We hope that the flag will engage the public to discover  more about British farming and get behind the industry by  signing up to the NFU’s Back British Farming charter,” said NFU senior campaigns adviser Gemma Fitzpatrick.

“Weeks of preparation were required to map out the logistics of how this could be achieved while just taking up a couple of hours of farmers’ precious time. Red, white and blue produce was brought along by farmers in the picture, and each farmer came dressed in one of the flag colours.

“The aim was to create a picture showcasing the best of British but also communicating the personalities within the picture and we’re really pleased with the result.”

The shoot for the picture took place at the farm of tenant farmer Andrew Green, from Worcestershire.

Farmers travelled from as far as Yorkshire to take part on the day and a partnership with NFYFC and Worcestershire Young Farmers ensured that everything ran smoothly.

The whole process was filmed using a heli-camera to produce the “making the flag” video below.