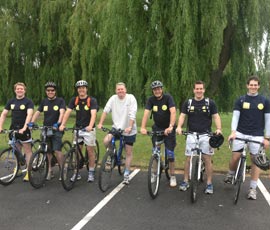 Savills REP division has kicked off its epic Land’s End to John O’Groats journey to raise funds for Countryside Learning.

“LeJoG” started on 28 May and aims to arrive at the end-point on July 11, with team members covering the ground on foot, horseback, bicycle and even – for a short stage – a canoe.

The route passes through some Savills managed estates and, where logistically possible, the firm’s offices.

The team was joined this week by NFU president Peter Kendall who followed the cyclists travelling from St Neots to Stamford.

Philip Gready, head of Rural Energy and Projects, said: “We are committed to raising £30,000 for Countryside Learning during the next two years and LeJoG is a fantastic way to start our fundraising effort.”

Savills REP division is also involving a number of its estate-owning clients via the Countryside Learning estate day programme. This will get schoolchildren and teachers on to estates around the country to educate them on the countryside generally.

Gary Richardson, chief executive of Countryside Learning, said: “We will be able to educate, inform and inspire future generations about their natural environment and what role they can play in securing it for themselves and their families – a vitally important cause.”

The year will culminate with 4,000 children from across London attending a two-day event at Lee Valley Park in Hackney where they can join in with more than 40 activities introducing them to the countryside, its history, crafts and importance to food production and environmental management.