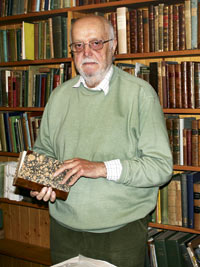 Farmhouse attics and cupboards are often stuffed with boxes and clutter no one ever looks at – yet antiquarian bookseller John Mattley knows these are often the hiding places of real gems when it comes to finding valuable old books about farming.

John is the UK’s only antiquarian book seller specializing in works covering all aspects of agriculture. And since he retired as one of the Milk Marketing Board’s main bull buyers, he has established a large clientele of regular collectors around the world who are passionate about books chronicling the history of our rural heritage.

At his home in Penrith, Cumbria, he now has over 3000 books including many rarities stacked on shelves alongside much more affordable but equally collectable volumes. But whether you are paying £20 or £2000 for an antiquarian book, it’s a fairly good bet that your investment will steadily increase in value as the years go by.

“That’s the great thing about old books. Most of them just keep on increasing in value so they are an excellent investment. And the fascinating thing about being involved in this business is that you never know what’s going to turn up next,” says John.

He recalls receiving a phone call from an elderly lady who had seen her neighbours taking boxes of books to burn on a bonfire they’d made in the garden.

“She asked them is she could have the book with the pictures of chickens in it, which they gladly gave her. When she phoned me I soon realised she had something very special. It was Wrights Poultry – a truly collectable item. Unfortunately many of the colour prints in copies of Wrights Poultry have been cut out to meet the demand for mounted poultry prints in the USA, so this was a real find.”

But John knows that even though many valuable books and livestock catalogues remain undiscovered, a lot continue to be burned because people don’t realise their value.

Although TV programmes have increased the public’s awareness, he knows from the items he finds that there are still thousands of rare volumes collecting dust in farmhouses around the country owned by people who have no idea how valuable they are.

Book fairs still turn up some rarities. When general book dealers come across any antiquarian books about farming they know John Mattley is the man to contact. And he always has collectors ready and waiting to buy certain books. Among the most sought after are copies of the Lake District Shepherd’s Guide. John was recently offered a copy of a first edition of this by a dealer who thought it would be too expensive for John to buy, but knowing its true value the cheque was written within minutes followed by a phone call to a keen collector. And the deal was done.

“He was so keen he wanted to come to the house and collect it that night,” recalls John whose website for his business – Phenotype Books – is eagerly monitored by collectors worldwide.

Surrounded by so many wonderful books, he finds it hard to select a favourite but one that did pass though his hands many years ago will always be remembered.

“It’s a book by George Garrard and contains etchings of cattle breeds going back to the late 1700s. I paid £2500 for it and sold it for £4500 to a collector in Australia. At the same time I was also offered a book by Lowe published in 1840 covering all breeds of livestock but I couldn’t afford both.

“Lowe was the first to draw livestock as they looked in real life and not in the distorted way of showing them with small heads and large bodies that had been favoured in the 1700s.”

When the Australian buyer of the Garrard book died last year his entire collection was sold in London – and the book realised £7500. “That just proves what a good investment these books can be,” say John.

From time to time, John issues catalogues of books he has for sale – the most expensive in the forthcoming catalogue is £765. Within a few days of catalogues being issued most of the books will have been sold, such is the demand.

Anyone with an interest in farming history could spend hours perusing the shelves at Phenotype Books, but some of the most interesting are not always the most expensive. So which are currently among the most sought after?

“There was a set of histories published in the early 1900s covering breeds like the Hereford and Aberdeen Angus. The leather-bound volumes are very collectable. They do appear from time to time but they are always snapped up. The breed history of the Devon is very rare – I’ve only had two copies in over 20 years.”

Admitting that it’s becoming a lot more difficult to find a bargain than it used to be, John continues to discover books to gladden the heart of avid collectors.

“My advice to anyone is not to throw away any old books or burn them or send them to the tip. They may not all have a value, but among them could be some real treasures.”