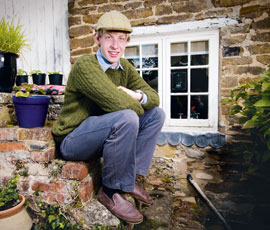 When the Olympic torch relay passed through Lincolnshire there was one young farmer for whom the journey was particularly momentous.

As one of the 8,000 people carrying the torch as part of the flame’s journey across Britain, Simon Hales had achieved something that three years ago his family would have deemed impossible.

In his own words, Simon has had an unlucky life. Brought up by his mother after his father died in a car crash when Simon was six, he had been at university for just 12 months when he suffered an accident that changed his life.

At the end of his first year studying agriculture at Newcastle in 2009, he was on a night out when he decided to climb over a fence to get back into a nightclub he had been thrown out of by mistake. In the dark, Simon didn’t realise there was a 20ft drop on the other side and he fell, landing on his head. Lucky to survive, he spent five weeks in a coma.

When he woke up, it became clear that the 19-year-old Simon his friends and family knew had gone.

Once a promising student with dreams of becoming a farmer, his severe brain injury left him needing to learn how to swallow, walk and talk. He was also left with memory problems, difficulties with controlling his emotions and a challenge of learning to live with a new, less compliant brain.

Many people would think the change was massively unfair, but Simon – with help from his mother, Jane, and his brothers Tim and George – has been determined not to just rebuild his life, but to continue pursuing the career he always dreamed of.


“I never liked working inside, so when I was at school I looked at what careers I could go into where I could be outdoors,” he says. “That’s when I thought I’d like to go into farming.”

With no family background in agriculture, Simon started helping out on local farms near his home in Rutland, Leicestershire.

“I discovered I loved working with animals and I wanted to be a livestock farmer,” he says. “Getting into farming can be hard, so I applied to Newcastle to study agriculture.”

Following his accident, Simon’s farming ambitions were understandably halted. He spent a year in a rehabilitation centre in Northampton as he relearned how to do things for himself and came to terms with the impact of his injury.

During that time, he was followed by a team of Channel 4 filmmakers, who wanted to chart his progress for a Cutting Edge documentary called My New Brain.

“There was a cameraman and an assistant who came to see me every day,” Simon says. “It gave me some normality, which was what I needed, because rehab wasn’t fun.”

The programme aired in August 2010 and as well as earning him an interview on This Morning to talk about his progress, it raised awareness locally of his situation.

“The Tyler family, who farm nearby, knew I was interested in farming and they said I could go and help with lambing,” Simon says.

Despite being “understandably cautious” about having him on the farm at first, he proved such a good worker that they asked him back after his first day.

“I have to be careful not to do too much because I can get tired, but after working there I wanted to do more because I loved it,” he says.

“I got in touch with Four Extra Hands, which is a farm work organisation, and they helped me find some work with another farm in Launde.

“I’m doing general stuff – helping them with worming and shearing. Working with sheep is just what I always wanted to do.”

“A silly, drunken mistake has cost me a lot.”
Simon Hales

So happy with getting back to work on farms, Simon, now aged 22, is also looking to rebuild his academic career. “I’m hoping to study at Brooksby College in Melton in September to see if I am able to learn again. After that, who knows – I might even go back to Newcastle and finish my agriculture degree.”

But despite his ambitions, Simon is very aware that he is not – nor may ever be – back to “normal”. He still relies heavily on support from his mother, who is his primary carer and he sees a psychologist to help him continue to deal with his injury.

“A silly, drunken mistake has cost me a lot,” he says.

“A brain injury is a hidden disability. I have a scar on my head from when I fell and a scar on my throat from my tracheotomy, but otherwise you wouldn’t notice there was anything wrong with me.

“I visit a psychologist still and I do a lot of work with Headway, which is a charity that helps people with brain injuries.

“A worker comes from there once a week to take me to the shops or for a coffee. It’s someone to talk to and it gets me away from mum for a bit.”

Since leaving rehab, he has spent time visiting local schools to talk to children about the effects of brain injuries and to warn them about the dangers of not wearing safety helmets. “I’ve done it a few times and it’s something I like raising awareness about,” he says. “We have a helmet we put on an egg to show them how wearing a helmet can make a big difference when you have an accident.”

The work Simon has done educating children – and the physical and mental progress he has made since the accident – led his mother to nominate him as an Olympic torchbearer.

On Tuesday (3 July) Simon carried his torch through Stamford in front of hundreds of people.

“She said she nominated me to get me back for having to look after me after my accident,” he says.

“I was surprised she did it, but I’m very happy about getting chosen to carry it. It made me feel like a celebrity. I guess I’m not so unlucky after all.”