Open Farm Sunday has been opening farm gates and visitors’ minds since 2006, giving farmers and the public an opportunity to connect and communicate.

Every June, hundreds of farmers open up their farms to the general public, providing a valuable insight into what it is truly like to farm in the UK.

Run by Linking Environment and Farming (Leaf), the event sees all types of producers get involved, from large arable estates in the East to mixed units in the depths of Wales, as well as farm parks, hop gardens and llama farms.

It has become one of the largest cross-farm events in the farming calendar and is the industry’s annual open day.

Many host farm walks, tractor and trailer rides, demonstrations and talks, often with a number of associated industry representatives also getting involved.

Getting involved with Open Farm Sunday has been a real eye-opener for Welsh farmer Abi Reader, showing her the massive difference that opening just one farm to the public can make.

Milking 180 cows on Goldsland Farm in the Vale of Glamorgan, Abi farms in partnership with her father John and uncle Robert on the 324ha mixed enterprise, which also runs a flock of 200 Poll Dorset sheep and grows barley and maize for feed.

She has taken part in Open Farm Sunday for the past four years and although she initially got involved through guilt, she has found the event to be a huge success. 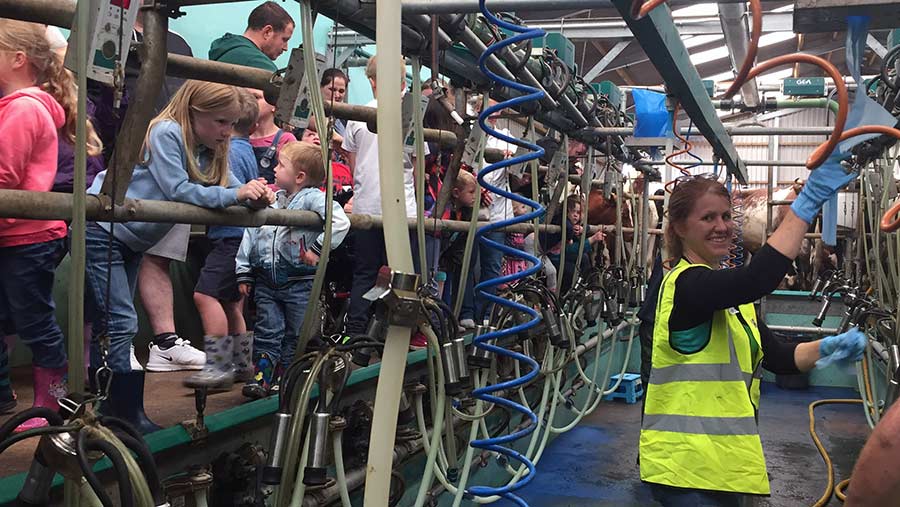 “I was on a leadership course at the time and was heavily involved with the NFU, and could see that the key to success in farming was letting the public know what we do.”

In the first year Abi wasn’t sure what to expect: “I was scared to death, worried about what people would see and that they would hate it.”

Despite only being listed on Leaf’s website and simply dropping off leaflets at local schools and shops, the farm’s debut event had 300 visitors, with neighbours, the NFU and Young Farmers all helping out.

“At the end of the day there were visitors hanging around and they asked me what they could do to help and support me. All I could say was to buy British, Welsh and Red Tractor foods.”

Following the event, in November 2014, Abi was on a train to London when she was approached by a woman and her two young sons.

“They had recognised me from the event and said that as a result they only ever bought British and Red Tractor foods. I realised just how important it is to connect to the public and the difference that opening just one farm can make.” 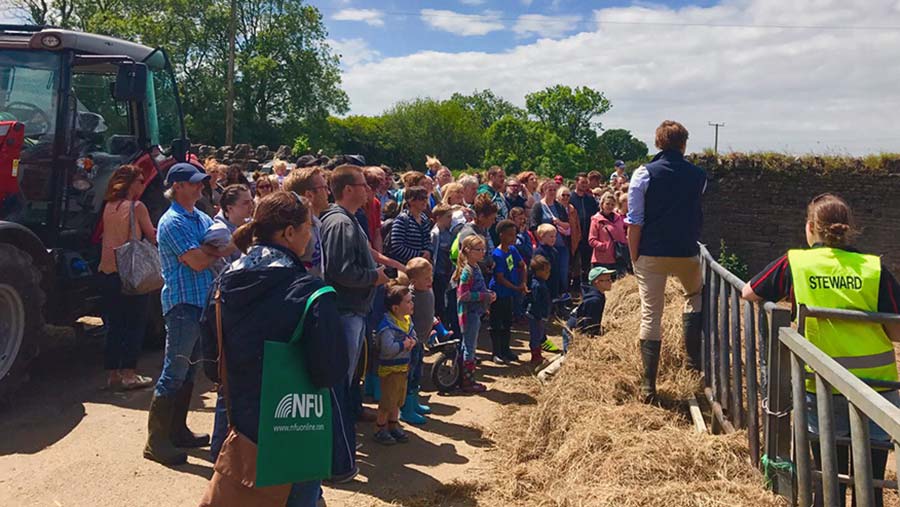 The day has become quite a community gathering, with the Wenvoe Wildlife Group – which is very involved in a number of nature projects on the farm – holding wildlife farm tours.

Other local farmers attend to give talks on beef, do sheep shearing and baling demonstrations, and give tractor and trailer rides. “It is surprising just who is happy to come and contribute in any way they can,” she says.

“I put an advert on Facebook for local stall holders to come along and sell for free and we have a lot of stalls now.” 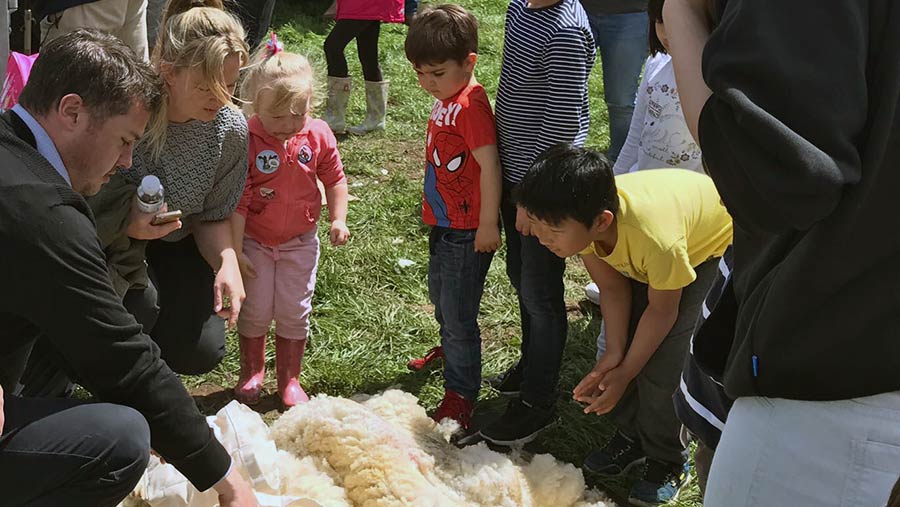 These range from the local flying club to a man with an owl, a local art group, cooking demonstrations and a local author.

“It creates wellbeing in the community and people get a lot out of it,” she adds. “The villagers from Wenvoe come year after year to be a part of it and each time bring their friends.”

If farmers are worried about doing it on their own farm, Abi suggests helping at another event. “I cannot fault Leaf for developing such an amazing event. If more take it up in the future and we can all change one person’s mind, we can go far.” 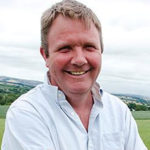 A family farm for over 450 years, Quicke’s creates handmade cheddar using milk from a 600-cow herd, on just under 120ha of rotational grazing.

They have been participating in Open Farm Sunday since 2011 and the event has grown each year.

Calving all year round and using five Lely robots, the Reed family have hosted an Open Farm Sunday event on their 340-cow dairy farm for the past two years. 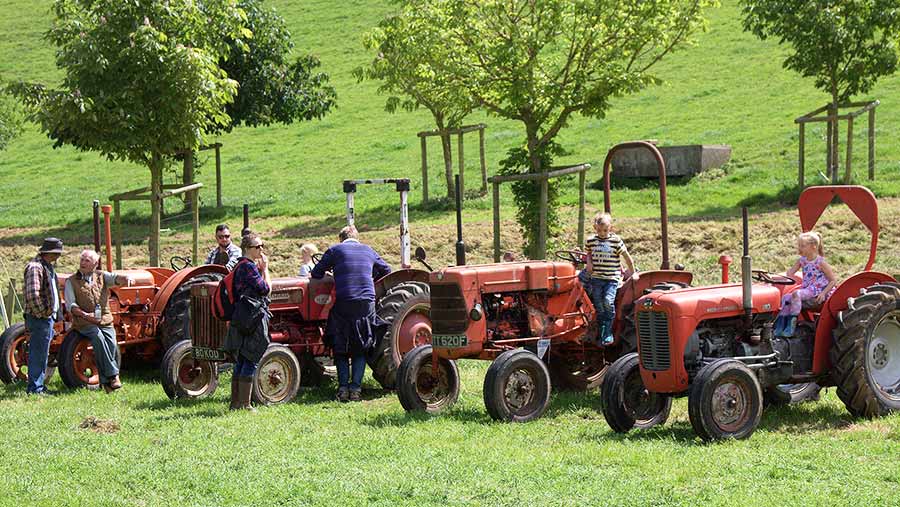 After visiting the USA and Canada and seeing how open-doors they are, Robert wanted to take the opportunity to welcome visitors to his farm. 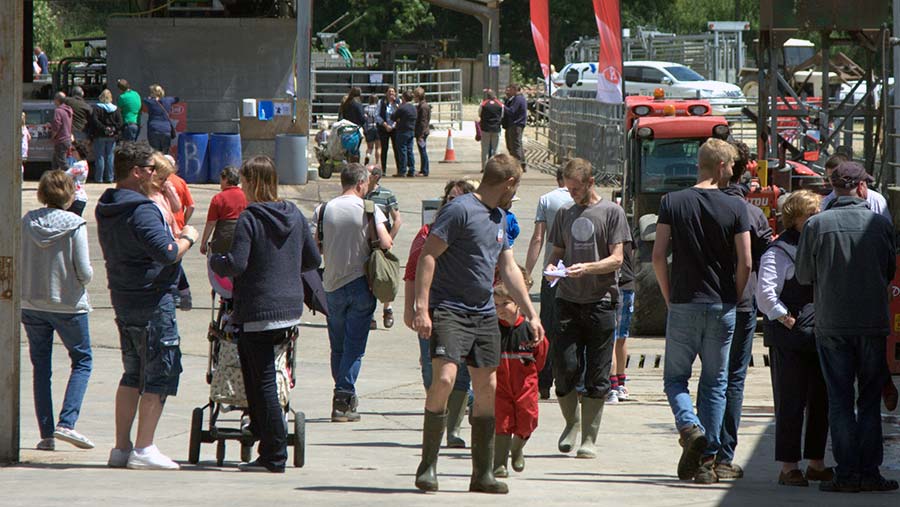 Open Farm Sunday will be held on Sunday 10 June 2018. Meanwhile, Open Farm School Days – a nationwide project to get schoolchildren onto farms and learning about where their food comes from – will be held throughout June.

All host farmers receive a range of free resources and support. It is free to participate and all farmers are encouraged to join, whatever the size and scale of the event that they wish to hold.

For more information or to register your farm’s participation, visit the Open Farm Sunday website.