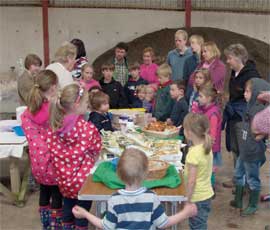 More than 100,000 visitors took part in this year’s Open Farm Sunday event, according to initial figures from the organisers, Linking Environment and Farming.

The annual event sees hundreds of farms across the UK open their gates to the general public. A LEAF spokeswoman said she was hoping last year’s figure of 120,000 would be broken when the final numbers have been submitted.

“In 2011, the event still attracted 120,000, despite heavy rain,” the spokeswoman said. “This year was blessed with perfect weather at most of the open farms, so we are optimistic numbers will be higher.”

The increase is expected even though fewer farms took part. A total of 340 farms opened their gates, compared with more than 350 in 2011.

“We had 364 farms register, but 24 pulled out in the run-up to the day. That was mainly due to the wet weather in the past few weeks,” she said. “A feature of this year’s event was the number of farms that worked together to put together an open day. As many as 15 clubbed together, so the number of participating farms is far higher than the official figure,” the spokeswoman added.

Some of the farms attracted 3,000 members of the public.

An Oxfordshire farmer said he had expected 250 visitors, but the final count was more than double that figure.

“We were overwhelmed by the number of people. We had queues for tractor rides and queues of people wanting to sit in the combine cab. It was brilliant though, the public really wanted to know more about how we farm these days.

“I shall rethink next year’s day and hopefully welcome as many again in 2013.”

Other farms also reported far higher figures than they had expected. John Whitby’s Rowley Farm, Buckinghamshire, planned for 250 people, but counted 975 visitors by the end of the day. And Lucy Blackwell’s Challow Hill Farm, Oxfordshire, had more than four times the number of visitors compared with last year, with a final visitor count in excess of 1,000 at close of play.

Add your photos of Open Farm Sunday to our photo gallery or email them to fwfarmlife@rbi.co.uk.