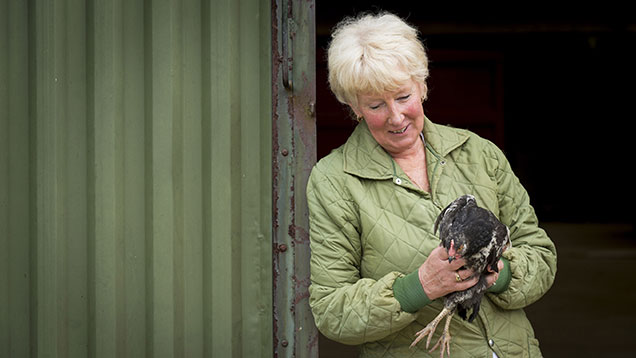 Bantams have an enviable reputation for being good mothers.

In our time, we have had ones that would sit on the proverbial brick; patiently and optimistically waiting for said brick to hatch. But the present string of foster mothers we are entrusting to see guinea fowl, hen and duck eggs through to hatching are a nervy and jumpy bunch.

This is so much the case that I even regularly have to swap sitting Banties in the hope that at least one clutch of eggs will be sat through to completion. Those birds are too keen to be off on the pull with those very attractive cockerels.

Several years ago, my brother-in-law Geoff brought a tiny Silkie Bantam to the farm to cover some partridge eggs that had been disturbed by the grass mower when we were silaging.

This little bird was the most wonderful mother and once she had reared the partridges, set about founding her own dynasty of Silkie-crosses with a very showy cockerel.

Each of her daughters sported a tuft of feathers on their heads. An aristocratic plume that set them apart from the riff-raff of the henhouse. They, too, turned out to be first-rate mothers; fiercely staying close to their nests, no matter how intrusive the hand rummaging around indiscreetly in the straw beneath them to check on their eggs. Sadly, foxes, rats and old age wrecked this bloodline.

Today, apart from one little black Bantam with a vague connection to the original supermum, we are left with a neurotic crew who fly off in a demented flurry of feathers, scattering their eggs at the merest hint of anyone approaching their nests.

And here, too, today’s Bantams fail to possess the brains of great-great-great-grandmamma in choosing nesting places. They may choose straw that is destined for bedding up the bullocks, a sack of dog biscuits, an upended sheep trough, an old bucket, empty plant pots or the innards of the baler. Hardly ever the hen hut boxes. They are far too conventional for our girls.

Still, despite their congenital lack of most of the mothering instincts their illustrious ancestor possessed, our Bantams have managed to bring off a fair number of guinea fowl eggs. And even a clutch of duck eggs, from a dozen brought to us by a neighbour who had unintentionally broken up a nest when dragging his pond for weed.

Recently, after spotting that one of the Bantams was off her nest , I removed the eggs and took them back to the house to float in a bucket of warm water. Seven rocked furiously, and if held close to your ear, a high-pitched peeping could be heard.

Back at the nest, I found the Bantam had returned and, being unusually mathematically gifted, decided that seven eggs were totally unacceptable when she had previously had 11.

Squawking indignantly, she flew off the nest. At this point a lascivious-looking cockerel sidled up to her and they hurtled off on Mission Unmentionable.

“She’ll come back,” John reassured me, demonstrating a touching faith in a female’s ability to forgive and forget.

An hour later she was still carousing round the yard with Casanova, but as darkness fell, her maternal instinct reasserted its pull, and she was back on the nest.

But the cultural shock our hens face when being coerced to rear offspring from a different species is nothing compared with the whole new way of life a flock of hens adopted by a friend of mine experienced.

These chickens had previously been cared for in the sheltered, peaceful surroundings of a closed order of nuns in the south of England. They shared the nuns’ lives of celibacy. But then the nun with special charge of them died, and the decision was taken to find an alternative home for the poultry.

My friend, who had been associated with the convent as a child, had no objections to extending her flock of unproductive Maran hens, with a total egg-laying capacity of about six eggs a millennium.  I know because we have some.

The hens waited quietly to be lifted into the crates when transport day arrived. Beatific expressions on the faces. Not a squawk between them. Clearly no blasphemies or curses had ever come their way. Nor indeed had cockerels.

They reacted with alarm at the lustful advances of a pair of randy Marans. Clucked reproachfully at the easy virtue of resident chickens when waylaid by strutting roosters, and finally, never having knowledge (both biblically and literally) of the male species, went into shock and refused to lay a single egg between them.

“What do you think I should do?” my friend asked.

I suggested asking the Archbishop of Canterbury for advice. After all, he had to counsel clergy who were unhappy about the ordination of women priests. Perhaps he could adapt the role to advise cockerels on the sensibilities of ex-convent chickens. Or maybe these hens were not used to the sight of jeans and jumpers and my friend could wear a long black dress instead. Maybe even tune her radio to the morning service for soothing, familiar chants.

But I thought the best thing she could do was to reconsecrate her home. Many years ago it was a priory and now, as a domestic residence, it was probably too secular for chickens with a religious background.

“On a wing and a prayer,” took on a whole new meaning in that henhouse.