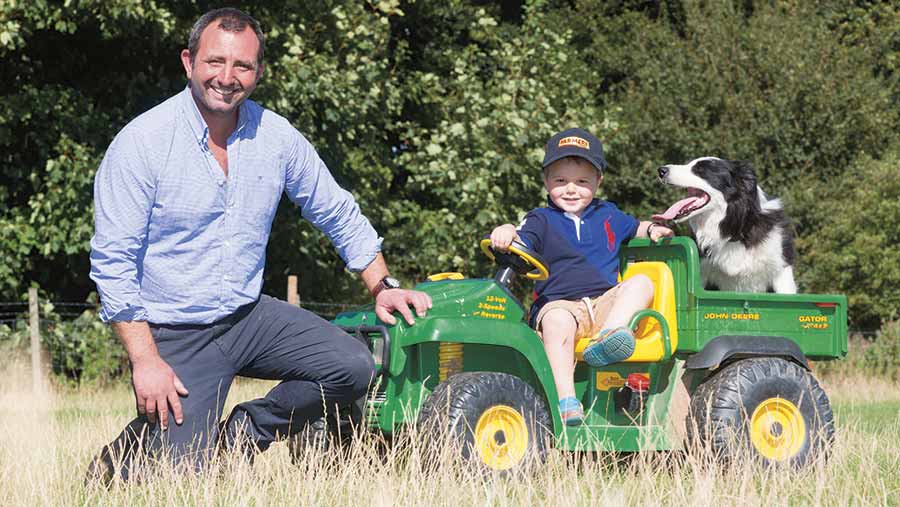 As we get on with our busy lives, we often forget what idyllic surroundings our kids are fortunate enough to grow up in.

I had a Facebook reunion a couple of years ago with some of my old grammar school friends who had all, unlike me, gone to live and work in big cities such as London and Bristol and all have high-powered jobs.

One of the topics of conversation was primary schools for their children. We discussed the dilemma of massive class sizes and how there were 10 to 15 different schools to choose from, all of which they knew little or nothing about.

When it comes to the time for my little one, Tom, to go to school, which won’t be long, there is only one choice – the village school that four generations of Read have attended before him.

Tom currently attends the nursery down the road which is run by some good friends who are also farmers and subsequently base the nursery on the great outdoors.

This means he spends at least 70% of his time outside and arrives home with bright red, rosy cheeks.

Our farms may not make us as “cash rich” as other businesses, but they give our children a great arena to learn and grow up in, even if it means we don’t always have as much money in our pockets.

Where else would you get shown how to drive at the tender age of seven in a Land Rover on farm tracks, as I did?

It was actually a Renault 4 van, which had a column gear stick (yes, I’m showing my age here!) that I learnt to drive in.

Off I went, carting hay to the sheep and spare parts to our farm-hands in the “Noddy” van. I recall it received quite a few knocks and scrapes as I honed my skills behind the wheel.

I can’t deny there are dangers present on our farms and we do, of course, have to be ever-mindful of this when we have kids.

What with tall tractors and trailers and teleporters with blind spots, these hazards can be numerous.

But I maintain that growing up on a farm is a great experience for a child. The close connection with animals can produce lifelong bonds that often inspires children to pursue an ancillary career, such as vet.

Some kids I know are absolutely petrified of animals and I see this quite frequently at lambing time when we have school visits to the lambing shed.

The children are often accompanied by their mothers and, if it’s not the kids who are scared of the stock, then it’s the mothers who are obsessive about the hygiene.

I remember one particular mum who would reach for the bacterial wipes every time her child touched a lamb.

After the tour round the lambing shed, I did a small sheepdog demo with my best bitch, Sal, and after the demo Sal was majestically sitting on the quad bike when said mother decided to give Sal a well-deserved bit of fuss.

It had slipped my mind that Sal had rolled in a great big pile of badger poo that morning. The elegantly dressed mum was soon reaching for the bacterial wipes again, but not for her child this time!

I’m not saying we shouldn’t be cautious about hygiene, because it’s important especially when you have members of the public visiting, but there’s no better way of building your immune system up than on a farm.

In fact, it was for the same reason that my mother would always let us kids crawl all over a pub floor (not that I try to do this now, I should add!)

A few years ago, Tom was by my side checking the ewes and at the time he had a fad on raisins. You might be able to guess what I’m going to say next… I turned around and Tom was shoving sheep poo into his mouth like a teenager bolting a burger at McDonalds.

I’ve never actually confessed this to my wife so I may well have just let the cat out of the bag about that particular incident!

Another time, more recently, he was helping me feed the dogs and I took my eye off him for two seconds, only to find him drinking water from a stagnant dog washing trough.

Neither incident, I should point out, seems to have done him any harm.

Which brings me on to a story my agronomist, Ken, told me.  When his son was of a similar age to Tom, he was helping Ken muck the horses out, only to disappear for a second then to appear out of the bale stack chewing on a flat-as-cardboard, decomposed rat. His mother, in despair, reached straight for the TCP!

Anyway, this is my last column for Farmers Weekly. I have been an avid reader of the magazine for as long as I can remember, sat on my father’s knee, as my son does now with me, flicking through the pages.

Thanks for reading my articles; it has been a great ambition fulfilled. I just hope I have done my little bit to promote our fantastic industry.