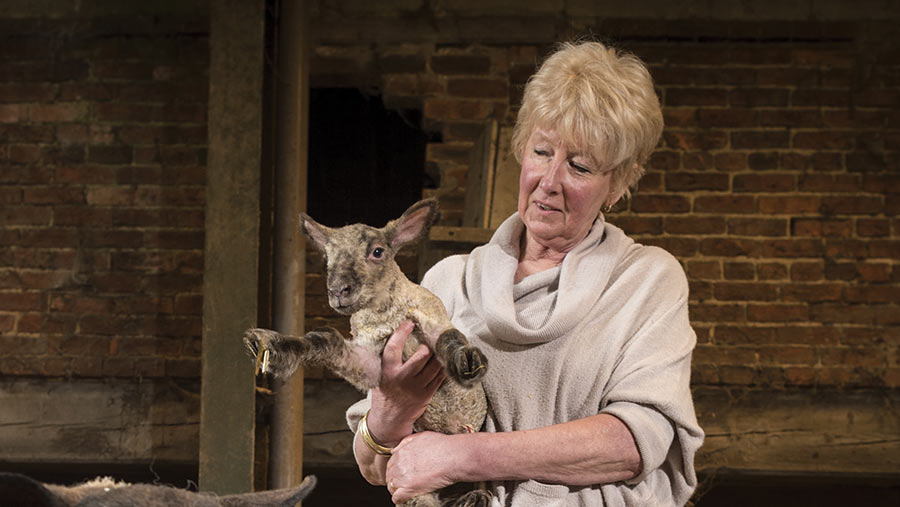 The first set of lambs on the farm this year arrived a week early after their mum had been enjoying several weeks R and R on what, always appeared to me, totally spurious grounds.

True, her feet were a little sore, but I think she just maintained a very low profile and never made enough trouble to warrant her being put back in the field with the rest of the flock. A lesson in life to be learned there, I think.

But now we are into the swing of it with the next ewe launching herself into maternity via several hours on her back.

Close to lambing she had up-ended herself into the minutest of hollows, one that had taken her weeks to find, and from which she was unable to roll herself upright. Even when we brought her inside, I found her doing a distinct impression of a dying fly – but with four legs, not six, waving frantically in the air.

Most of the time the ewes behave themselves and lamb without any assistance. Using Charolais tups on Mules and Suffolk cross ewes has proved the most successful lambing strategy for us.

But occasionally there are hiccups. Fetching the ewes in last night to the big shed after their day out in the field, John spotted one of them propped up against a large tree, giving a good impression of a sheep that had been nailed to a post.

“If she’d have moved an inch, she would have fallen over,” he said. Diagnosing possible twin lamb disease, he brought the ewe home in the trailer and she was soon full of enough drugs to send her on a psychedelic trip for a few weeks. The vet calls it the kill or cure treatment but, so far, so good. At least she is alive and has not lost her lambs.

I go into siege mode with teats and ewe replacement milk powder aplenty in the cupboard. Empty tonic water bottles are a testament to the sacrifices I have had to make; consuming large amounts of gin and tonic to get the required number of spare bottles in.

But star contender for the most stupid ewe in the flock goes to a young sheep that John is persuading to adopt a quadruplet lamb.

One of this gimmer’s lambs had suffocated at birth as she had failed to lick its nose clean of the membrane and John was just not there in time to cleanse it for her.

So he skinned the dead lamb and fitted out the quadruplet with a well-fitting fleece jacket. The gimmer became besotted with the imposter and totally rejected her own surviving lamb.

As a result, she is spending time in the stocks, her head restrained so she can’t butt her own lamb to smithereens, but with her bag still accessible to the lambs so they can make on.

Prior to lambing time, I go into siege mode with teats and ewe replacement milk powder aplenty in the cupboard. Empty tonic water bottles are a testament to the sacrifices I have had to make; consuming large amounts of gin and tonic to get the required number of spare bottles in.

There are always a few lambs requiring supplementary feeding and I remember a few years ago we entertained a friends son for a week’s work experience on the farm, with the rather selfish thought at the back of our mind that here was some very useful labour to share feeding time for the pet lambs. Of which we had several at that time.

Our friends have an estate in Scotland, much of which supports a sporting let. Sheep are not encouraged as they tend to wander around and disturb the pheasants, duck and deer. Back then, the son and heir was a student at an agricultural college, a stalwart of the rugby team, but with a career plan focused on playing rugby in Australia or New Zealand, while perhaps being based on a sheep farm.

Time came to feed our pet lambs. Although there were only officially two pets at that time, John was offering supplementary feeds to eight other lambs in the paddock. Two sets of triplets and a couple of lambs from other sets.

As soon as you set foot in the paddock, these lambs rushed over. Bawling away, they proceeded to clamber up your legs until they were fed. Because we were feeding from two pop bottles, it was all rather hectic. Drinking time required patience and an ability to remember which lamb was which and how much it had drunk.

Our rookie shepherd set off confidently. “Nothing to it,” he informed John. Before being felled and brought to his knees by the onslaught of sharp little hooves.

“Get off,” he shouted. Adding a string of Scottish endearments. Unprintable.

The lambs paid no attention. Butted, rammed and pushed him still more.

“Clear off,” he expostulated, swiping the lambs aside like flies. They didn’t like that. Retreated for a few seconds. Regrouped. Then launched an all-out assault clambering up the back of his legs and butting him in the bottom.

He tried a different tactic. Picked them up one at a time and fed them in his arms, cradling each lamb like a baby. But then he forgot which lamb he had fed already. Confusion set in. A perennial condition I have noticed at lambing time. Bottles eventually emptied, he retreated out of the paddock, still hungry lambs bawling forlornly. Three very full lambs burping and hiccuping their contentment.

“That’s established my priorities,” he said.“I’m cancelling the sheep farm.”