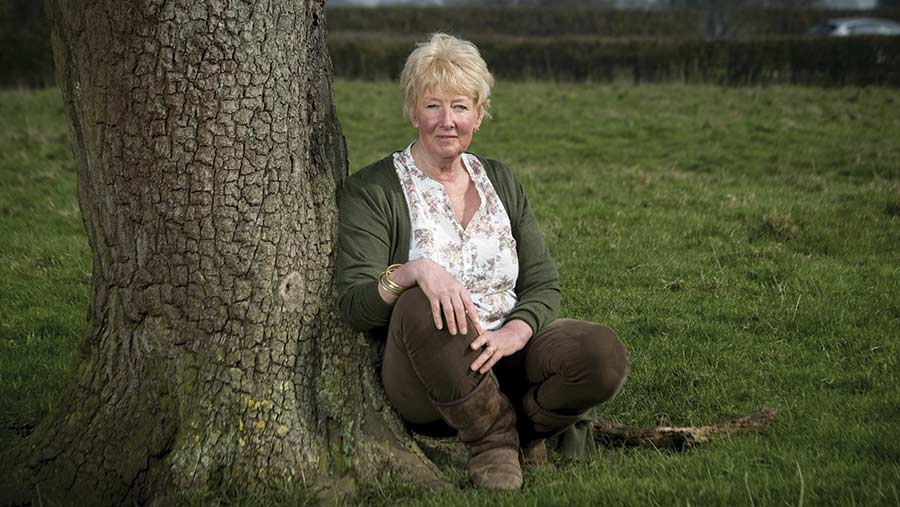 Checking in our documentation for risk assessments for a recent FABBL visit, I came across suggestions in our health and safety guidance for best practice if you are hosting visitors such as schoolchildren on the farm.

Well, it’s a while since we did that and, back then, the concept of a risk assessment for farm visits never even crossed our minds.

Our daughter Jo’s class at school were engaged on a farm project and wanted to “walk” a recently ploughed field to see if they could find any interesting artefacts.

As it happened, there was a field John had ploughed out in late September but was leaving fallow until the spring.

See also: From sheep dip and stockings to slowing down and Sanatogen

Now, every week on the farm it seems some form of minor excavation work is in progress. Be it diking, ditching, fencing, gripping, trenching or burying, you can be sure one man and his spade will be hard at work.

As a result, we are constantly attempting to identify mystery coins, the latest being a 4th-century Roman copper-alloy nummus.

But, along the way, various pipes and pots, bones (not human) and even an entire car exhaust system from a Morris Minor have turned up.

After heated negotiations over who would own the pot of treasure the children might discover, the class, plus Jo’s teacher with a metal detector, turned up.

Then, plastic bags in hand, the children formed a line across the recently ploughed grass silage field then walked slowly forward searching the ground in front of them.

Unfortunately nothing more important or valuable than broken clay pipes, shards of pottery, a section of a horse bridle bit, glass marbles, shattered bottles and the rather manky remains of a Mallard duck turned up.

But all were reverentially laid out on in the yard on their return and, at a later stage, made into a fascinating collage of the haul on their classroom wall.

This included even the Mallard skeleton. After it had been duly disinfected, of course.

The most interesting objects to the children were the old-fashioned pop bottles. From the pieces they had picked up, John was able to explain how the marbles had sealed the mouths of the bottles and that when the marble was pushed down, it relocated in a small channel in the bottle’s neck to allow pouring.

In all his years as an amateur archaeologist/farm labourer, John has found many marbles (and lost them too), many smashed bottles, but never an entire bottle with a marble still in it.

That is until recently when clearing a dyke he came upon a mud clogged, algae-encrusted, green glass bottle with its very own marble. What a find.

You would have thought he had turned up a rival Middleham Jewel (now in the Yorkshire Museum) or pot of gold.

Ruining my already rather tatty dishcloth, he cleaned up the outside of the bottle, but had a problem with its muddy interior.

An avid believer in all those miracle biological powder advertisements, I advised him to leave the bottle to soak in a soapy solution overnight.

But John’s patience is only limited to dealing with stock and farmwork. The thought of leaving his new-found treasure to soak overnight was anathema to him.

So, as I sat absorbed in the office attending to some paperwork, I heard him scrubbing and cleaning his find with an ancient baby bottle brush.

Suddenly there was an almighty crash. My heart sank as I imagined John’s distress at breaking his find and my ears winced at the string of expletives emerging from the kitchen.

I might have mentioned that he is generally a man of few words. Well he can find them when necessary.

The anxious face that turned to greet me when I rushed in confirmed my worst fears. But no, he assured me, the bottle was still intact. No need to worry then.

Later that evening came an enquiry if we had any superglue. I hadn’t, as it turned out, and just thought that maybe the carved head on one of John’s sticks needed securing.

Those little tubes of superglue can prove invaluable for quick fixes. Only when I got round to washing the last of the evening’s dishes and a great lump of my ceramic sink fell off did I match crash to crime.

Which leads me on to the reason for a self-defence class I attended last night. I had been urged to attend by a friend to make up numbers in a drive to reduce the impact of rural crime.

Perhaps I would learn to defend the family honour or, in a very last resort, my own.

A masterclass in jabs, kicks, heel-grinding and the effectiveness of a loud forceful “No” when attacked followed.

“Practice with your husband when you get home,” the instructor suggested. So I did.

“Attack me from behind,” I told John, planning one of my new lightning arm twists.

John, 6ft 4in and 15 stone, lifted me up, pinned my arms by my sides and held me at arms’ length.

That instructor probably hasn’t met many agricultural heavyweights who can balance a straw bale on the end of one stubby finger. I also ache all over and my toe is starting to throb. I’m not sure I’ll go again.