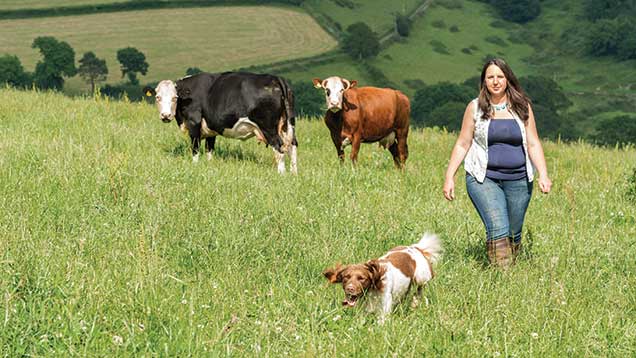 One word perfectly sums up the last month on the farm: wet. I don’t think we have had two consecutive days without a downpour. Thankfully, we have made enough silage to see us through the winter, but the thigh-high third cut is just going to have to wait.

Any local farmers who grow combining crops are starting to exhibit a crazed, maniacal stare, checking and rechecking their weather apps and leaving endless anxious messages for the contractors. At least for us the wet weather has just been rather unpleasant, rather than an economical nightmare. The cows are definitely not enjoying the sogginess and the calf creep feeders are paying for themselves as the girls seem to spend most of their day huddled under the hedge instead of out grazing.

In other news, it was Will’s birthday a few weeks ago and, this year I actually got around to purchasing his present – a cocker spaniel puppy called Daphne. He has wanted another dog for a couple of years but we never seemed to get around to it.

The children were very excited at her arrival – that lasted all of about half an hour before the reality of a boisterous pup with needle sharp teeth and the need to bite everything sunk in. Cue the erection of a large dog cage in the porch and a couple of new stairgates to separate human from canine infants.

Daphne is a real sweetheart and has already become one of the family, but I am rather looking forward to her getting her adult teeth. My housekeeping regime has had to step up a gear in an attempt to keep the kids toys, Will’s socks and my precious Dubarry boots out of chewing distance.

Lydia has finally mastered the art of putting one foot in front of the other and as a result now refuses point blank to be transported around the farm in her pram. It is walk at the pace of a 15-month-old baby or nothing. Needless to say my farm chores are taking rather longer than usual. She is so proud of her new stripy wellies though and wears them around the house all day.

There is one significant issue that is causing me a real headache at the moment and I’m sure many farmers wives have to deal with exactly the same problem. Will has a bad back. Not just a little niggle that can be remedied with a couple of ibuprofen and a hot bath. He is walking around like a lame gorilla because his hip is also giving him grief.

The cause of his complaint is obvious: at 6ft 2in he was never designed to milk in a parlour built for someone who is 5ft 6in, but contract milking is an important part of our business and he is regularly doing between 8-10 milkings a week on top of our own farm work.

I know it must be getting really bad as the other day I told him not to load the creep feed bags into the truck and he stood back and let me do it. However, he won’t let me make him a doctor’s appointment. In fact I don’t think he has seen a doctor once in the last 10 years.

What is it about farmers that makes them so damn stubborn about receiving help? The bull caught a cold the other day and Will was straight on the phone to the vet (OK, it was a little more serious than a cold, but still) because he said that the bull was worth too much to be allowed to get sick.

Why then, won’t farmers view their own health with the same importance? We have got three bulls, so if one is out of action for a few weeks the world won’t end, but I’ve only got one husband to do all the heavy lifting, silaging, tractor driving and so on. When he breaks down, I’m stuffed.

In the “real world” a severe back injury would result in weeks off, an occupational health review and a whole load of other stuff to make sure it didn’t happen again. I was talking with a friend who works in an office recently and one of her colleagues has been signed off work for six months with a bad back as a result of sitting down (pansy).

In our industry it seems like the attitude towards long-term health is seriously lagging behind. On the whole, approaches toward preventing serious injuries and accidents have improved dramatically, but we still put ourselves at risk of severe health problems down the line by not thinking about how we lift things or how we set up equipment that we use every day.

Farming is physically demanding and the fact that most farmers work for themselves with little or no employed labour means that there is no occupational health and safety department to ensure that things are being done correctly.

It falls to us, the nagging wives, to make sure that when he’s pushing his body beyond its limit, we hide the tractor keys and trick our stubborn husbands into a trip to the quack on the pretext of helping pin one of the kids down for a vaccination.

Jess Jeans and her husband Will run 75 suckler cows on an 80ha National Trust farm on the Devon/Cornwall border. They have two children, Edward and Lydia. Jess has a degree in rural business management and enjoys horse riding in her spare time.