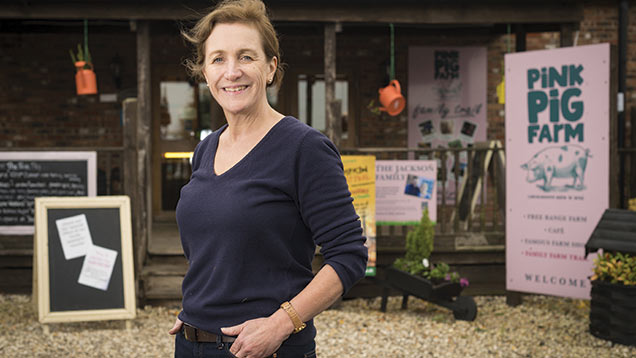 Apple crumble was just about to be served at our friends’ kitchen table when the current husband’s mobile rang.

It was a frantic daughter in hysterics saying that there were some men shouting under her bedroom window and that the sheep were going mad in the adjoining paddock.

We leapt in the car to start driving the 30 minutes home. I rang the police and said that there was a teenager by herself in an isolated house, with several men in the garden.

We arrived home to find one terrified child, no sign of the interlopers and no police. The police did ring later to see if she was all right. Thank goodness she was.

The same thing happened a few nights later. The youngest daughter had promised to get a friend to stay with her as Andrew and I jaunted off to Krakow for a few nights.

The friend never arrived, but the same men did at around 11pm. This time she rang Carl, Andrew’s right hand man, who lives just down the hill. He drove up in two minutes and blocked in the unknown car in our car park. As he waited for someone to return, a man came up behind him and Carl questioned his intentions. “Just lost my dog,” he said.

Carl called the police and was asked for the number plate, which turned out to be false. He followed the car and found two men beside the road apparently drunk, waiting for their friend to pick them up. They disappeared pronto – amazing for such supposedly inebriated people.

Having a chat a few days later with a retired copper, he said that this particular man is well known to the police and tends to target big machinery. He said that Carl was lucky not to have been attacked. Yet despite Carl phoning 999 while waiting in the car park, no police came.

Statistics show that police response times over the last few years have increased. I think we’ve just pushed up that average, as it’s now 35,280 minutes since we dialled 999.

Following a spate of local rural burglaries, we are now employing a security firm to beef up our alarms – for the shop and playbarn, too, and have random security patrols on at night.

Another sign telling undesirables to come and ransack the place apparently is old alarm covers. If yours, like ours, are slightly rusty, bearing the name of a security firm that went bust in the 1960s, it may be time for a change.

Once when my eldest was about 11, he was asked by his father what kind of wall we should build around our house car parking area to give ourselves a little privacy from the shoppers coming on site. He drew watchtowers, search lights and security guards with Rottweilers on chains. It may be cheaper to replace your alarm covers – maybe even get an alarm that works.

The biggest deterrent, according to the retired policeman, is light. This is causing inward struggle with my eco-warrier/tight farmer of a husband who sees the electric meter whizzing round as I insist that the floodlights in the yard, stay on all night.

He quickly asked our local electrician to install a light sensor to save a little cash. It is amazing how quickly jobs get done where money “draining” is involved.

He’s even going to install a gate at the end of the drive, something I have been asking for over the last 10 years. It will never deter a gang determined to steal a tractor/combine/forklift, but it may slow down the opportunists.

Over 600 sheep were recently stolen from a local farmer. So hearing a commotion in our sheep field in the middle of the night recently, I feared the worse. Opening the shutters I saw a small lamb running up and down in our garden trying to get back to mum who, together with all her sisters in the adjoining paddock, were bleating furiously.

The current husband was away so I pulled on my dressing gown and wellies, armed myself with my trusty hockey stick and told the youngest daughter what I was doing.

Still suffering from shock from the incidents above, she really didn’t want me to go outside on my own. This made me even more nervous as I made my way across the grass in the dark following the sound of frantic bleating.

I lost my footing and fell backside-first into a large patch of nettles. The free-range lamb insisted on hurling itself at the fence until it got to the open gate whereby it skipped across it in order to continue flinging itself at the fencing on the other side. After quite a few choice words, the lamb was eventually reunited with its grateful mother.

If the current husband’s opinion is anything to go by, most people seem to think that burglary always happens to other people. Our drive is long, which probably helps; sites next to roads seem to be targeted more by the opportunistic thief.

The invention of security cameras beaming on to your mobile may have also encouraged the more techie people to invest. Indeed, a local councillor, while sitting next to me at a local dinner, showed me his business premises from four different angles – all before the main course was served.

But now that farms have such expensive equipment, we are organised criminals’ idea of heaven.

Maybe we do need to start taking security more seriously.

Sally Jackson
Sally and husband Andrew farm 364ha just outside Scunthorpe in north Lincolnshire. They have a farm shop, The Pink Pig Farm (a former winner in the diversification category of the Farmers Weekly Awards), with a 90-seater café and farm trail. Sally is chairman of the Farmers’ Retail and Markets Association (Farma).