Farming is still seen by many a “male” profession. So what does a young woman with no previous experience, who’s just completed her first summer harvesting, make of it all. Jenna Macfarlane shares her perspective. 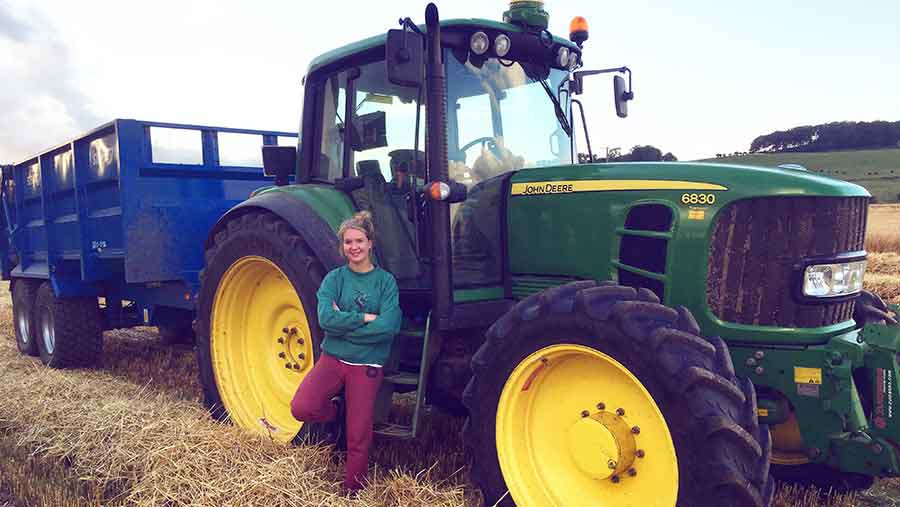 I had never given agriculture much attention, despite having grown up on an arable farm in the Scottish Borders and being constantly surrounded by it.

I’m currently in my third year studying English language at the University of Glasgow and when I moved to the city, I was captivated by urban life and quickly forgot about my rural origins. I had assumed from a young age that I would be a journalist like my mum.

When I was a kid, I would travel to school in Berwick-upon-Tweed every day, driving past numerous fields without a single thought about the processes and work behind it all – until this summer, when I was employed as a tractor driver.

My dad is a farm manager of an 333ha arable farm that grows wheat, barley, oilseed rape and spring beans.

Usually, Dad would ask my 18-year-old brother to help him with the harvest, making my brother the only other employee, but the plan was ruined this year when – shock, horror – my brother decided to move out and got himself an apprenticeship.

It started off as a joke, but apparently it was now my turn to take to the wheel. Not once in my 21 years had I envisioned myself driving such a machine, perhaps as it is widely perceived as a “male” job. I had never seen a woman in this kind of role before.

My part-time jobs had mainly consisted of lifeguarding – something I was very passionate about. I have always enjoyed having a sense of responsibility, which is maybe why I agreed to my dad training me up on the farm.

Of course, as I began to learn the ins and outs of driving a John Deere 6830 – the different gears, using the in-built GPS, reversing the trailer – I found myself more challenged, mentally and physically, than I had in a long time.

The harder aspects were the heavier jobs, such as changing tractor wheels. However, I soon discovered the key was mastering technique. Modern implements such as wheel-changers and air-guns, instead of spanners, improve safety while reducing the amount of physical work needed.

In the past, physical tasks like that would have hindered women from pursuing farming careers.

There were some vital parts of the job that I had never considered to be a potential challenge until I tried to do them – namely inserting the hydraulic pipes from the different machinery implements into the tractor.

I found, as with the majority of the physical chores I carried out, that it wasn’t strength that was needed, but rather technique. Once I grasped that I could attach the trailer just as efficiently as any male worker. Practice makes perfect in farming, as in any other field.

Before this summer, I wasn’t aware of how technologically advanced agriculture has become. Engaging the GPS tracker for the first time was a really strange experience, but I soon appreciated the freedom it gave me to simultaneously check the field for stones and keep the tractor parallel with the tramlines.

The main challenge facing all farmers is the weather – and only now do I understand to what extent their lives are governed by this.

We were held back numerous times even after the slightest shower, but I soon learned there was always an alternative task to do if we couldn’t cut or dry the grain. Call me naïve, but the variety of jobs on a single farm completely surprised me.

After I became more confident, I could reverse the tractor and trailer with a full load of wheat into corners of the grain store, I could use machines such as toppers, rollers and cultivators and I could collect the grain from the combine in the trailer while driving alongside.

My training also enabled me to understand soil care and I realised that the soil is a fundamental, critical part of the farm and essentially its biggest asset.

When all these different aspects clicked, it was a euphoric feeling of epiphany – reinforced by the fact that I was a female, in a man’s world, carrying out these jobs to a high standard.

One of the most interesting things was not the work itself, but rather people’s reactions to a female driving the tractor.

My peers were all slightly shocked when I first told them what my job for the summer was – the majority of them secured part-time work in waitressing or retail.

I received a lot of messages which read: “How’s farm life treating you?” as if they expected me to have made some huge blunder or quit. It wasn’t clear if this was due to my gender, but when other messages said: “I can’t imagine you driving a tractor, that’s hilarious”, I couldn’t help but wonder if my brother would have received the same reaction.

Notably, when I pulled into the side of the road to let a car pass, my polite wave was met on several occasions with a stare of utter shock from local male farmers. On one occasion a local man stood and watched me cultivate a field for 10 minutes with a grave expression on his face.

There have been positive reactions, however. A number of local farmers have said to my dad: “Is that your daughter driving the tractor?” and proceeded to congratulate me on doing a good job.

One even said: “A better job than my sons could do.”

I’ve received approval from other  females too – an older woman pulled up next to my tractor and said: “Are you the only female tractor driver around this area?”

I told her I believed I was and she was so full of enthusiasm for me that I felt incredibly liberated and proud that I was doing this as well as any man could do it.

It’s not surprising that people have been reacting in this way. Only a few decades ago, strenuous physical work was a key part of arable farming which ruled a lot of women out of the profession. Mostly, they would have been found tending to animals.

Now, in this modern age, with technology replacing manual labour, I can see no reason why there shouldn’t be an equal amount of women going into the profession. Sadly, a lot do not even consider it.

I now find agronomy a fascinating, varied and interesting subject and it doesn’t stop there. More women could easily progress into, for example, pest and disease control, plant nutrition or the agricultural chemical side of the industry.

The options are incredibly vast no matter what gender you are. The only restraint for women is the lingering attitudes of society.

Hopefully the stereotypes will gradually be challenged and this will be reversed. Of course, we also need to encourage more boys to consider careers in the countryside – these days there’s a major push in schools for young people to go to university or get an apprenticeship, rather than considering agricultural college.

My university friends are all studying arts subjects such as history and English and could well end up becoming lawyers and teachers. No one I know is considering going into farming, environmental studies or anything along those lines, which I find sad.

After this summer, and considering the competition I face in a dying field such as newspaper journalism, I will definitely consider a career in agriculture. Farming is a fundamental – and too often underappreciated

Do you have views on the gender mix in farming? Maybe you have experiences as a woman working in the sector? Let us know by emailing fwfarmlife@rbi.co.uk