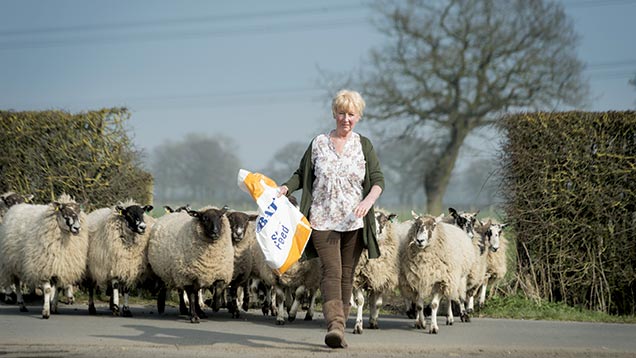 As I prepared to jump into the car to drive to the local shops for fresh provisions, the angle of the car forced me to look towards the rear back wheel. It was missing.

The car was resting precariously on a jack. There would have been an almighty crunch if I had moved off. Unbeknown to me, John had spotted I had a flat tyre and had taken it off ready to change it for the spare. Thoughtful, eh? Either that or making sure I was grounded and unable to spend any money.

In fact, the tyre had had a large blackthorn through it and must have gradually deflated overnight. The reason I could not find John to ask what was happening was because he had already taken the tyre to the local garage for repair. What service. And what a blessing to have a practical husband. I recanted all my wicked thoughts.

Blackthorns are poisonous pieces of kit at the best of times and I remember when a thorn worked its way into the tendon of a sheepdog’s paw.

Sally, the border collie in question, was an invaluable help in her position as top sheep terroriser. But the injury to her tendon put her out of action for several weeks.

At this time of year, with lambing just a few weeks off, we bring the sheep home regularly for a “tootsie” check. John makes sure their feet are not overgrown and removes any debris that has lodged in the cleft between the hooves.

Fetching the sheep home without the help of a sheepdog quartering back and forth at the rear of the flock can be hard work. That year it did not take our sheep long to realise that John was incapable of delivering a sharp nip to the back of their legs. So they just ignored him.

What John lacked in a set of sharp teeth and four swift legs, however, he made up in guile. Sheep will follow an interesting-sounding feed bag anywhere. That year the ‘pied shepherd’ led his ladies back and forth from the fields with no more help than the rattling of a plastic sack. It worked a treat, all John had to do was make sure the sheep did not catch up; otherwise he stood a fair chance of being mugged.

It is not only the sheep that are preparing for their maternal role in February. John makes a regular midnight inspection of the foldyard to check on any cow that may be calving.

The yards are at full capacity at this time of year. Occasionally the necessary close proximity of stock can lead to slight upsets in the breeding plan. The bull pen is next to the main foldyard for the cows. A stout gate separates them. If the level of bedding straw rises too high, there is always the possibility of an amorous bull clambering into the cows’ yard – or vice versa – for a bit of bovine vice.

Of course, in practice this never happens as regular muck-outs keep the level of the straw down. And a secure system of baler band knots keeps the gates tied up. But, administrative and management malfunctions have been known to happen and our first knowledge of it is usually a hullabaloo going on in the foldyard.

Our tactics consisted of trying to contain the herd by initially rounding up all the stock into the silage clamp area. Then with a masterly control of gates and traffic flow, which any policeman would be proud of, plus a colourful agricultural commentary querying the parentage of the cattle concerned, the bulls were split off and directed back into their own yard.

Once more the night was still and we only have to hope that the autumn will not produce any unexpected progeny.

With a sheepdog so vital to the husbandry of the flock, we keep a regular check on their well-being. When Sally started to limp, carry her right foot in the air and take great care not to place it on the ground when running, John examined her paw more closely. Sally was having none of it. She did allow me to feel between her pad to check out the problem, but only while cuddling her and telling her what a good dog she was. And that only for a nano second. So it was lead on and off to the vets.

Sally did not like vets, she associated them with sharp jabs in her bottom. In fact, she did not really like a lot of people. Being a very busy dog, and seeing herself as chief security officer in the farmyard, she was basically totally intolerant of strangers. And cats.

“Hold her head while I examine her paw,” the vet asked me. Sally squirmed in pain. “It’s all right, you can let her go now,” he added after the examination had finished. He turned away.

But not fast enough. Sally whipped round and grabbed him for a sharp nip. Good job he had a baggy coat on. I can still recall the distant sound of the flock chuckling. Not them this time.