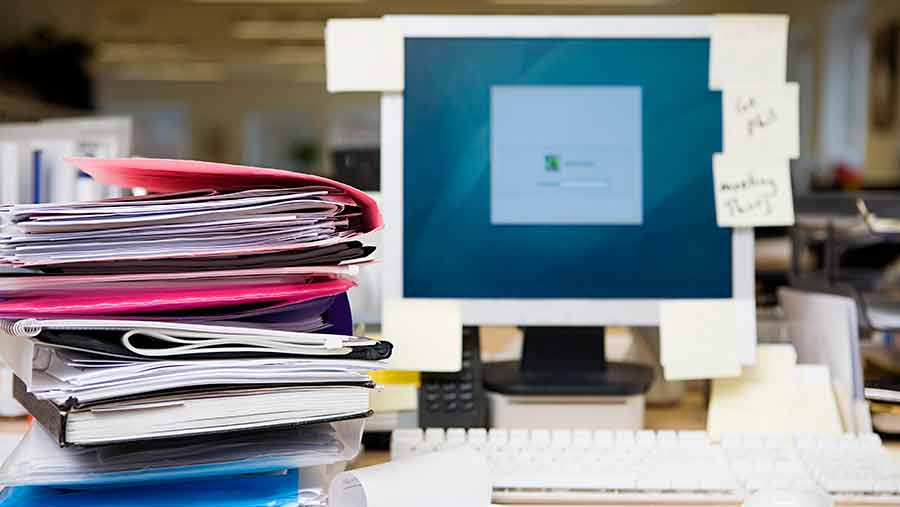 Self-help guides and the latest management improvement theories have never really featured in our farming business.

One of my previous employers used to be keen, but they’ve always left me sceptical. We once went on an away-day where we brainstormed a new mission statement.

Given the overwhelming market dominance of one major competitor, the only realistic short-term aim was to become established as the second largest player in the area.

However, the logical mission statement – “we want to be second best” – didn’t seem to strike the right note, so we never adopted it.

Could self-help be the answer?

This spring, however, I have turned to a self-help guide to address a particular problem – clutter.

There was one aspect of the BBC’s This Farming Life which left me surprised and envious. It wasn’t the acres, the scenery or the livestock – it was the immaculate office of former Farmers Weekly Sheep Farmer of the Year, John Scott.

There were his and hers computers at either end of a wide bench with not a piece of paper, or mess of any sort, in sight. Clean and clutter-free, it was extraordinary.

In fact, I wondered if this could be some sort of scene mocked up for TV purposes with the real office elsewhere on the premises with a door that barely shuts due to overflowing boxes of miscellaneous detritus inside. Actually, that’s a description of our office.

Call in the scrap man

There seems a natural tendency towards hoarding among farmers. This can range from keeping that pile of rubble to fill in rutted gateways at some unspecified time in the future to amassing a huge collection of redundant or broken machinery in various stages of decay. You know who you are.

The “let’s keep it just in case” mindset is ingrained in farmers, as they’ve always had to improvise, make do and mend. Sometimes even if the cash was available, the new kit was not.

But because space constraints have not usually been a problem on farms, things can continue to accumulate through a lifetime until someone moves or retires.

The problem is finally tackled with a visit from the scrap man, a skip, a spate of fires and unsolicited gifts to relatives.

With the office, things tend to pile up because, to a free-spirited outdoorsy person, it’s just too daunting to sort it out. Our office is a hell-hole of stuff we will never get round to reading, will never refer to and will never need.

The filing cabinets are full, the shelves are full and there are stacks and stacks of documents awaiting attention.

But when I do have a spare 10 minutes, somehow I’d rather spend it doing something else. Every time I do have a go, the impact seems tiny and the effect is quickly eradicated by a new influx.

The longer it’s avoided, the more overwhelming the task of sorting things becomes. So I finally decided to do something about it, using the theories of a trendy Japanese self-help guide.

While mainly aimed at sorting out homes, the basic philosophy can be adapted to the agricultural office.

The main advice is to attack it all in one go and “discard anything that doesn’t spark joy”. OK, the concept of joy in the office is a bit of a stretch, but let’s work with this – a northern equivalent would be “if in doubt, chuck it out”.

I’m only retaining the necessities: six years of accounting records, key documents for the current year and the computer – easy.  Let the burning, shredding and recycling begin.