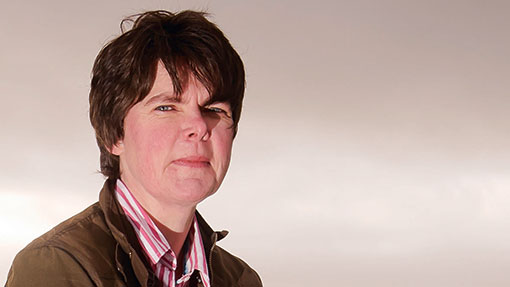 Summer is finally over. I could tell when I woke up in the middle of the night to the sound of heavy rain outside and the bracing sensation of a gale blowing in through our bedroom window. Furthermore, my bones were aching.

I seem to have reached the stage in life when my own body is now a more reliable weather forecasting indicator than seaweed, fir cones or the BBC. So I can confirm that I experienced a major-change-in-the-weather type of ache.

The change in the seasons is normally unremarkable here. So, before we plunge into the rants, moans and grumbles that autumn will no doubt bring, it is worth reflecting on what a really great summer it has been on our farm.

First of all, there has been plenty of grass and we have made a record pile of high-quality silage. A local dealer has commented that it would have to snow continuously from now until March before anyone is going to need to do any trade. Cue the world’s saddest song played on the world’s tiniest violin.

“For once the ewes have also decided to choose life”

Secondly, the lambs have been thriving and for once the ewes have also decided to choose life. It has been a pleasure to see so very little of Warren’s, our local fallen stock disposal people.

Indeed, the cattle and the sheep are all “looking well”. This is a phrase my grandfather used to mean healthy and well nourished. When he applied it to a human being – such as a granddaughter, say, the recipient usually had the sinking feeling that it was time to go on a diet. However, when applied to livestock this is an unalloyed compliment and a good thing.

All in all, we have managed to get more lambs to market earlier this year, the breeding stock prices have held up well and we are approaching the purchase of new tups and the next sheep breeding season with much greater enthusiasm than in recent times.

Just as the livestock has benefited from feeling the sun on their backs, so have we. The general feeling of well-being arising from a decent prolonged period of reasonable weather should not be underestimated.

Got a view on this subject? Have your say on our website forums

I am ever open to advice on how to enhance the lives of farming people, so I was intrigued to read a recent recommendation from Kate Humble, sometime farmer and presenter of Lambing Live. She advocates that people should wander around naked outside as a way of getting closer to nature. I have given the matter some thought.

This is quite a novel suggestion, but perhaps not quite as unusual as many may think. I know of an old friend in the South who likes to walk his crops and rogue wild oats in the nude. This idea has caused some raised eyebrows – nay, wincing, among his friends in the North for many reasons.

However, I can reassure readers that nude farming is not something that we will be trying out here. Firstly, this is a military training area and we don’t want to traumatise the troops as they prepare for overseas operations.

Then there is the fact that the temperature never really gets high enough on the hill to make total nudity a serious possibility. This pleasant summer we were able to operate without outerwear – topcoat, leggings, hat, scarf and gloves – but everything else stayed on and buttoned up.

Finally, given all the adders, ticks, biting insects, nettles, rushes and thistles, we feel quite close enough to nature as it is.

Still, it’s all academic now – on to autumn.

For once the ewes have also decided to choose life