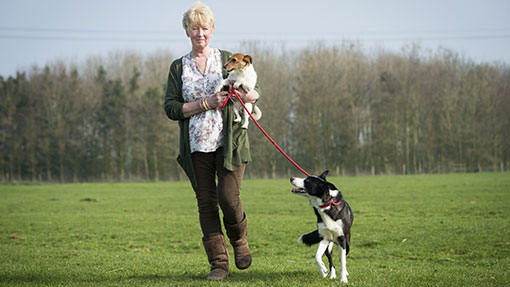 John has been threatening to worm me for the past few days.

I have developed an irritating cough that is the legacy of a sore throat. The sheep cough when they have lungworm and, as he still has a drop or two of Panacur left after worming the flock in September, he has kindly offered to include me as a job lot.

It wouldn’t be the worming I objected to so much, as anyone with children and grandchildren will know taking your allotted dose of Pripzen has long been part of family life. It was being sprayed with a purple marker to show I had been done. I just know John would be unable to resist doing it.

See also: Bobbi Mothersdale on the ‘charm and mystery’ of sheep sales

We had moved the weaned lambs on to fresh pasture after they had been wormed. It involved walking them along our narrow lane. By the time we reached the turn-off into the field we wanted them to graze, we had gathered a small convoy of Sunday afternoon motorists. All very cheery, however, and not in the least impatient as they had been entertained by sheepdog Fizz’s antics to ensure that not one lamb lagged behind. Lots of leg nipping if any of them dare even think of grabbing a mouthful of grass from the roadside.

Dogs are integral to our life. Each has a specific farm role; the current three being ratter, shooting dog and chief shepherd. And domestic routines too: lounge lizard, kitchen maid or guard dog. Paintings, pictures and photos litter the house to remind us of four-legged companions now long gone.

There was Jill, a yellow Labrador with a penchant for theft. Her finest moment came when we had builders in to extend the farmhouse. Each builder came with a wondrous thing called a pack-up for lunch. It took a few mishaps before the builders realised it was not a good idea to leave the back of their van open and unguarded. Finding a fat, replete Jill stretched out across the remnants of their lunch boxes soon taught them to give security a high priority. I made a lot of sandwiches for those builders.

One morning, a member of the building gang called at a baker’s shop on his way to the farm to add a couple of French loaves to his shopping list. “Come and look at this,” he called to me later. “Just look at what that dog is trying to do.”

After stealing the loaves, Jill had grasped them gently in the middle and was attempting to get through the narrow garden gate on to the lawn for an illicit feast. The problem was the loaves were wider than the gate, effectively barring her entrance. At the sound of our voices, her tail started to wag. Without a trace of guilt she calmly dropped both loaves, and ate them there and then. Her tail never stopped wagging, right through to the last morsel.

Pip, our current Labrador, polices all activities on the farm – especially those related to food. Millie, a Jack Russell, is always anxious that Pip does not discover where she has buried any of her bones. She goes to great lengths to ensure their hiding place – for retrieval at a time when they are truly manky – is secure. Millie hovers over her bone, willing Pip to go to sleep, so that she can bury her treasure for exhumation at some delightful future feast. As she tiptoes past Pip for the burial service, Pip opens one lazy eye to check the co-ordinates of where Millie is going. She then reassumes her torpid pose. Later, when Millie has returned triumphant, face and paws encrusted in soil from digging, Pip waits until she has dropped off into a deep slumber before recalling the map references for the buried treasure. Millie is then jolted awake by the sound of a tantalising gnawing sound on her disinterred bone. No wonder she is slightly neurotic.

Many of our sheepdogs have also had highly strung dispositions. Fizz is fairly laid back, but not keen on vets who stick needles in her or any sign of us dawdling behind the flock when they are being moved. This can invite a swift nip on the back of our legs to get us to speed up. She is prone to bullying the poultry and we frequently find a hen spread-eagled against a wall squawking violently or the ducks freaking out as Fizz edges towards them with a wolf-like snarl playing round her lips. The cows, however, cow her and the occasional headstrong ewe can still stamp her foot and force her to back off, but give Fizz a submissive human and she could have them in a pen in a trice.

We’ve had literary terriers that enjoyed a daily perusal of the newspaper on the sofa, even though no one could read the papers afterwards unless they were jigsaw addicts. We’ve had flatulent Labradors whose indiscriminate appetite for sheep and hen muck, calf placenta or dead chicks, often saw us cowering at one end of a room with cushions over our noses while the dog slumbered in a green fog by the fire. I particularly remember one dog, Barney, who would stick his head under the sofa, as even he could not stand the smell.

All of these canine friends have and had their own personalities. Our lives would be poorer without them.