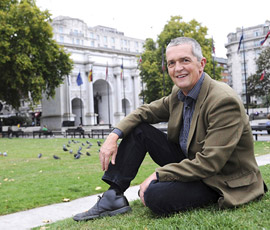 It’s the time of year for ploughing matches. Up and down the land, farmers will be gathering in fields to either enjoy the last of the summer sun or be stiffened by the first of the autumn chill while tractor and horse work to and fro in search of the perfect furrow.

As a candidate for “worst ploughman of the year”, I can but marvel at the skill and the attention to detail displayed at ploughing matches. I’ve always been a bit of a low-till enthusiast myself and, while I can wax lyrical about the many benefits of not turning the sod, the truth is the real reason I prefer to drill direct is because I’m hopeless at ploughing. To quote my dear departed dad: “You plough about as straight as a dog piddles in the snow.”

Nonetheless, I will be sticking to my tales of low-carbon, wildlife-friendly, pesticide-reducing, organic matter-preserving, soil-enhancing conservation tillage and leave the ploughing to the experts.

Ploughing matches are part of our industry’s history and long may they flourish. Many of them were started in the first half of the 20th century, when much of the arable land of Britain remained unploughed and, thereby, uncropped. The plough was a symbol of agricultural productivity while conversely its absence was a sign of dereliction.

It should always be remembered that in the early years of the Second World War, there were two key initiatives that were scrambled in order to keep fascism from our shores. The first was fought in the air by some of the bravest men British history will ever record, but down on the ground there was another fight going on – it was called the “plough up campaign”.

The importance of this drive to produce more from our resources is well illustrated by the testimony of one Rudolph Hess. When Hess defected from Nazi high command in 1941 he was interrogated by his British captors. The first and most important thing the men from M15 wanted to know concerned Hitler’s invasion plans. Since 1939 most of south-east England had readied itself for a Nazi invasion. It seemed it was only a matter of time before storm troopers parachuted onto our green and pleasant land. But surprisingly, Hess was adamant that Hitler had no plans to invade Britain and never had any. The reason for this, Hess had explained, was very simple. In 1939, while much of British farmland remained unploughed and idle, Britons had sleepwalked into the perilous position of being 80% dependant on imports for its food. Hence Hitler’s strategy was not to waste his war resources on invading Britain, but rather he would starve us into defeat through submarine blockade. And that, in a nutshell, explains the importance of the plough up campaign. Along with the Spitfire we should add the plough pulled by a Fordson tractor as one of the great symbols of our history. It is a chapter worth remembering at ploughing matches.

But I will finish with a slight criticism of ploughing matches. It should not be forgotten that when they were first set up they demonstrated state-of-the-art technology. Much of the equipment being used would have been of interest to the local farming community because it represented the future. Would it be fair to say that we haven’t moved with the times with our ploughing matches? Are they becoming just celebrations of the technology of the past? Which ploughing match committee is going to be brave enough to bring in the first driverless tractor class? And on that note, I’ll don my tin hat and shut up.

Share your views on this and other issues on our forums.