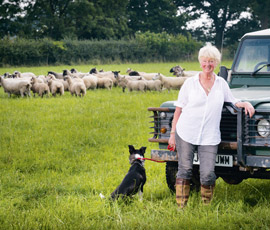 I could only think the hens had gone off laying for a week or two. Or that they’re more devious than I imagined.

Trying to match my wits against our motley crew of Bantams and retired free-range hens is an uneven contest and the hens usually win. Not one egg in the hen house this week, so where are they laying? Our sneaky flock has learned that the most obvious spots in the main shed, on top of the big bale stacks, are insurmountable. They just do not want to fly that high. Laying in nooks and crannies around the bottom of the stacks, meanwhile, is vulnerable in terms of voracious dogs who like nothing better than a freshly laid egg for a snack.

So could they have discovered the small bales compressing the silage stack? Perilously wobbling up the sides of the clamp with “keep on the bales and don’t tread on the polythene, you’ll go through it” ringing in my ears, and harbouring sulky thoughts that John is more bothered about the clamp than me, the search was once more futile.

To be fair, I have been distracted in my search for eggs. We’ve been worried about an upturn in the amount of fly strike in our sheep as a result of the muggy weather. We are finding two or three sheep or lambs a week suffering from maggots, despite the protective pour-on they are doused with.

Earlier John had put in a request for my help with worming the flock and checking for blowfly depredations. I was not dressed for farm work as I was just about to go out. So, clad in a long, flouncy skirt, I sped off with him in the Land Rover.

“Just stand there out of the mud,” John said. “I want you to stop that gap so they don’t run back into the field. Fizz and I will round them up, but they need a bit of persuading to go into the corral.” They sure did.

Nothing would persuade the flock to go anywhere near the corral. Our young sheepdog Fizz was exhausted, running back and forth in her attempts to gather stray lambs and stroppy ewes back into the mass of sheep.

The crafty ewes soon grasped that if they stand up to Fizz, who is still learning her trade, she backs off. In desperation, with nothing more effective than my arms to wave and scare the stock into turning, I took my skirt off and stood there waving at them in my knickers and wellies. “You’re putting me off, never mind the sheep,” John shouted.

It didn’t work, anyway. They raced past us and back into the field. It took a change of approach and a bag of sheep nuts to lead them into another field and then into the corral from the other side.

Checking the flock’s rear-ends is a natural add-on when worming them. Although pouring a bucketful of disinfectant over the back-end of a lamb that has recently presented the world with a maggoty posterior may not seem the most effective method to deter more flies, trying to persuade that same lamb to sit in the bucket would be even less productive. Sheep may sport that claggy, green clump of muck almost as the must-have accessory for summer’s most fashionable tail-ends, but it is an irresistible invitation to flies.

At this time of year, hands-on involvement with the sheep presents a useful opportunity to check whether any of the lambs are fit for market. If they are, they are marked and dodge the worming drench because of restrictions on these applications for animals going to the abattoir.

Keeping your balance and staying upright when working with sheep in the confined surroundings of the corral is not always easy. Especially when a bone-headed ewe or frisky lamb makes a bid for freedom. What with the occasional dab of pour-on or sip of drench from the worming gun, we may end up bruised and battered, but definitely free from worms or flies.

On one occasion recently, however, the livestock really struck back. After a well-aimed headbutt from a determined lamb, John lost his footing and fell hard on to his elbow. The pain laid him out and I had to drag him off to A&E.

Three hours later we were back home with John’s arm in a sling. Not a good time, with the busiest bit of the year fast approaching – harvest and our elderly combine’s moment of glory. The rest of the year our John Deere 1075 sits dusty and neglected in the grain shed. Prior to harvest, she is primped, preened and serviced, ready for action.

Our Jack Russell, Millie, is particularly alert to the first roar of the engine and the whirr and clank of the combine’s belts. If – and this happens – a family of rats has made an extremely des res in the combine’s innards over the past year, the start-up usually has them making a swift exit. Straight into Millie’s waiting jaws.

I was sent up into the combine by John to turn the engine over and check that everything was running smoothly, because he still can’t work with his left arm.

While I was up there, I noticed a nest of old straw wedged in the 14ft header. Guess what? It was filled to the brim with eggs. Scrambled eggs for tea tonight, then.

Bobbi Mothersdaleand her husband John own 81ha Lowther Farm near York. They have a suckler herd, a flock of sheep and arable crops. Two daughters, three grandchildren, three dogs, assorted poultry, an overgrown garden and country pursuits also take up their time.