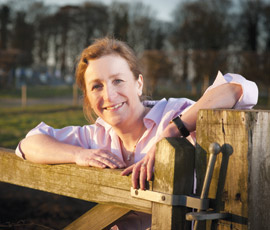 My current husband and all three children are music mad. Me? I’m more of a Radio 4 type of person and I really cannot fathom their love for music.

My lovely mother-in-law always had the radio on. In fact, although many of her memories, sadly, have now disappeared, she can still remember all the lyrics of every Christmas carol and sang with gusto at the Christmas concert. The sing-a-longs seem to be the activity that all her friends like best.

Musical chickens gave us our first big PR coup after opening the farm shop. We had read an article about how music, played to animals, could increase production whether it be milk in cows, calming pigs or egg production.

We had just taken charge of our first flock of 1,000 hens and decided to play them Classic FM. It seemed to work and when we told the local press, they got very excited.

We have a photo, which appeared on the front of the local paper, of me and my husband in front of a vegetable barrow, upon which perches a chicken sporting earphones.

We were asked for interviews by local radio and even appeared on BBC Look North. The daftest ideas seem to give you the most publicity.

We play music in our coffee shop, for which we pay a ridiculous amount for a PPL licence even though the bands have already been paid as we have purchased their CDs or downloaded legally.

My husband has made up several playlists: “lively”, “swing”, “big band”, “love songs” (a romantic farmer I hear you cry – shock, horrorsadly however, only when it comes to music) and one particular genre called “wake up”.

This last category is for the girls setting up the coffee shop in the morning and it’s music that maybe not all of my customers would enjoy. It includes such joys as Meatloaf’s A Bat Out Of Hell and Katrina and the Waves’ Walking on Sunshine.

I was walking through the coffee shop one morning and stopped to chat to three elderly regulars enjoying their freshly baked cheese scones and pots of tea when I realised that playing, not too subtly in the background, was The Penis Song by Monty Python. I excused myself as rapidly as I could and turned off the offending track.

Deafness in the elderly is a lifesaver, however I have a sneaking suspicion that if we had alerted my regulars to the contents of the song, they might have had a bit of a chuckle. I just didn’t dare!

Music is apparently an essential component of the annual harvest. The combine went through all the last minute checks in June and – horror of horrors – the worst fault involved the radio, or lack of it.

Apparently the broken radio caused immense stress and threat of strikes amongst the workforce – the current husband, his right hand man, the apprentice and son. All of whom agreed that the radio repair should come top of the list. There are now fights over the station settings.

Hubby listens to Radio 2 or Smooth; the right hand man favours our local radio station but says he prefers to actually listen to the combine and its various operations most of the time; the apprentice, who at 18 has a greater knowledge of the oldies than anyone I’ve ever met, enjoys Lincs FM, for which he gets much ribbing.

And my son? He plugs in TEDTalks podcasts on his mobile and ignores the radio altogether. Different strokes for different folks and all to make the time pass when driving in straight lines.

The on-board computer gave my husband and son a chance to bond. Having finished a degree in computer science at Newcastle, my son was sure he knew the right way to set it up and took some time to read the instruction manual.

His father thinks that reading handbooks is for sissies and, anyway, he knows farming. They both spent an entertaining afternoon together in the cab adjusting screens, merging screens and generally fiddling with the settings, each trying their own method.

Ultimately, the proof comes down the auger and the jury is still out as to who was the most successful as they are both, in private, claiming victory.

Music featured heavily too among the staff and our youngest daughter, as they all took time off to go to festivals all over the country. It seems that attendance at these events is a rite of passage for 17- to 21-year-olds.

They set off in micro shorts and wellies (and that’s just the boys!) with insubstantial tents that they then fail to find at night, mountains of alcohol they struggle to carry and a few packets of disgusting, dehydrated muck to eat.

The fever of excitement beforehand is a wonder to behold and it is difficult not to feel a slight tingle of regret that you are being left behind.

However, once they return with horrendous colds, trench foot from the mud and horror stories of the toilet facilities, you realise why you didn’t go.

We met some people on holiday who were heading for a festival but staying in a B&B at night – my kind of camping.

Music, it appears, is all around us. It helps animals thrive, teenagers buzz and ensures men on combines drive happily through the night. What more could you ask for?

Sally and husband Andrew farm 364ha just outside Scunthorpe in north Lincolnshire. They have a farm shop, The Pink Pig Farm (a former winner in the Diversification category of the Farmers Weekly Awards), with a 90-seater café and farm trail. Sally is currently chairman of FARMA (the Farmers’ Retail and Markets Association).