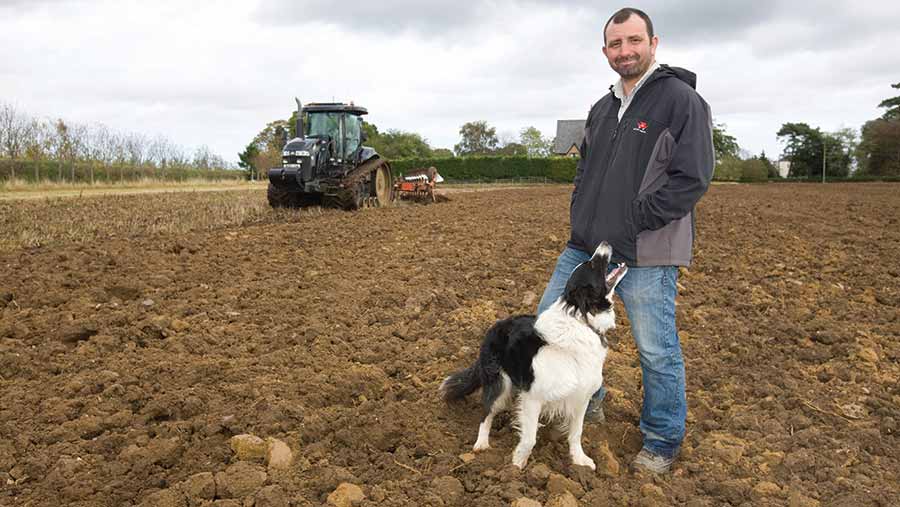 Back in the late 1990s, Tony Blair and his followers were singing along to the Labour theme tune, Things Can Only Get Better by D:Ream. A couple of years later, foot-and-mouth had struck, wheat prices were at an all-time low and you could not give your lambs away for love nor money. I was singing along in my tractor cab to an Oasis B side, Where Did It All Go Wrong? That felt more apt. It was at that moment in history that agriculture’s satnav broke and farming took a big wrong turn.

Last summer, my winter beans were having a spot of aphid trouble, as they do. Having sprayed them once, I pondered whether I needed to cover them again with insecticide, but my agronomist was on holiday.

Obviously, in this modern world, we are not allowed to give ourselves a spray recommendation so I picked up the phone and called my father’s old agronomist, Colin, who I have probably not seen for 20 years.

Colin, being solid as a rock, sorted the situation, but it was that 20 minutes that I spent with Colin that really gave me food for thought.

Colin was saying that at the start of the 2000s, when prices were hit hard, all the corduroy-wearing farm advisers were telling us all to spread our costs and take on more land or specialise in one area.

This is when many massive arable units were born and we were intensifying ourselves to the limit, when what we really should have been doing was consolidating ourselves and mixing farming with a good, healthy rotation.

Colin added that smaller, mixed farmers were making money then and still are today, whereas some big arable units with blackgrass remain in the red. I thought to myself no truer word had ever been spoken – just as the plough came back, so mixed farming with healthy rotations is coming full circle.

Back in the late 1990s, when I was 25, all I wanted to do was farm 2,000 acres or more and run big, high-horsepowered tractors with heavy implements. My father-in-law, conversely, had a smaller mixed farm and was still drilling with a Massey 30 drill and a 100hp tractor. I am sure his profit margin was a lot more than mine.

I know we can’t go back to where we were, but we can take some very useful ideas from the past. There is an old saying: “Profit is sanity, acres are vanity”.

It’s amazing in this neck of the woods, in the main wheat belt of the country, how many people are going back to mixed farming, restocking themselves or employing sheep farmers like myself to graze cover crops to be grown with crops in the spring.

My father would always tell me what Grandfather said to him, back in the 1960s, that we would be grown up with rubbish and blackgrass if we carried on growing the amount of winter corn my father was growing. Sure enough, he was right.

He used to have a saying if he saw any grassweeds stuck out of the crop: “That field will soon be a heaping, creeping, crawling mass of blackgrass, haver and twitch.”

On our farm, in the past 15 years, we have increased the area of grass to rotate sheep on, and have imported a lot of chicken, cow and pig manure, which has helped soil fertility.

Sometimes I wonder that if we’d all stuck to mixed farming more, with everybody having a bit of everything (livestock/arable), then our industry would not be over-producing.

When I was a lad, every farm had a small dairy herd – now there isn’t one within 20 miles. The surrounding villages had more farming people in them, and when you walked in the pub for a pint it wasn’t full of civil servants. It was more down to earth, full of hard-working farm labourers. All this has gone now.

I always think that on a mixed farm the atmosphere is better. The place is alive year round and the farmer and his employees are about. When you drive into a large arable unit in the winter, the doors are all shut and there is tumbleweed blowing across the yard and not a soul to be seen. When the farm is busy year round, even the staff become more dedicated.

We had an old boy, Johnny, who worked for us; he lived in a cottage on the farm. His wife, Madge, was susceptible to having a tumble now and again. He would always shout for us to help him put her back on her feet because she wasn’t particularly agile. One morning, when Johnny was on the early rota to check the lambing shed, Madge had become farwelted (a local word for when a sheep gets stuck on its back), but Johnny – dedicated as he was – had gone out to check nothing was lambing before he had given us a shout to get Madge on her feet.

So let’s hope mixed farming is on the way back. There’s an old Lincolnshire saying: “You can’t farm without a***holes.” It’s nothing to do with the argument about staying in Europe, but it should make us remember that where there’s muck, there’s always money.

James Read farms sheep and arable crops on 400ha, on the edge of the Lincolnshire Wolds at Louth. He and his wife Sally have a young son, Tom. He trains and trials sheepdogs. Find him on Twitter at @jimreadfarmer