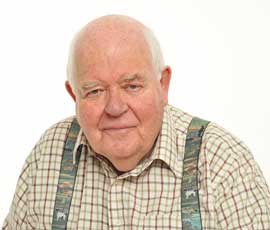 After observing predictable phenomena such as this through my life, it still gives me a thrill. Most years I am not disappointed, but 2012 was one of the few exceptions when some crops failed to emerge and others came up patchy, as seedlings struggled against overwhelming rainfall. But this autumn has restored my faith in the magic of nature.

Even more outstanding in contrast to last year is the state of oilseed rape. Drilling started extra early in mid-August as memories of last year’s often-abortive September efforts persuaded growers to get out as soon as possible after combines had cleared the land. This year, almost without exception from what I have seen on my travels, rape fields look like every seed has grown and the warmth of the soil has encouraged quick growth, covering the land.

Even in this area where, as regular readers of these columns will know, we have huge and troublesome flocks of pigeons, the birds have spent most of their time so far on uncultivated stubbles and not attacked the rape. With luck, the full crops that will soon be as big as cabbages will cover the soil, leaving nowhere for pigeons to land unless they walk into crops from the headlands. That, at least, is my optimistic hope, although winter frosts will almost certainly change that.

As I write, we are just beginning to harvest sugar beet. The Cantley factory opened a couple of weeks ago, but the roots are still growing and we wanted to allow them to gain a bit more weight before we lifted them. In addition, the factory had a major breakdown soon after it started slicing so would not have been able to process many of the roots even if they had been delivered.

It is, in any case, always a compromise between the best time to lift beet to get an economic yield and clearing the land in time to make good seedbeds in which to drill wheat afterwards. Hopefully, we have got it right this year – at least with this first field we are lifting. And prospects for drilling wheat immediately behind the beet harvester into a reasonable seedbed – again unlike last year – look encouraging.

All of which suggests that I, alongside I suspect most other arable farmers, am in a better mood than 12 months ago. Kind weather can have that effect and it has certainly made me feel better this year. But there is no escape yet from the damage done by last year’s wet and cold. Barns in many parts of the country are not as full as they were budgeted to be; bank accounts that may have been topped up by emergency harvest sales over recent weeks are not as robust as was intended; and cashflows, when carried forward to next summer, look vulnerable.

Many will be hoping for an understanding attitude from their bank manager, appreciating that it will take a couple of good years to repair the financial damage caused by crop failures and low yields of the past two or three years. Landowners should be OK by virtue of the increases in land values and the collateral that represents. Tenants, on the other hand, may not feel so secure.

We can only hope the better weather generates a more mellow and generous mood among our financial masters, as it has among their clients.

David Richardson farms about 400ha (1000 acres) of arable land near Norwich in Norfolk in partnership with his wife, Lorna. His son, Rob, is farm manager

How are crops looking in your area? Have your say on our forums.