‘The View From Here’ is a Farmers Weekly series giving an insight into rural life from women around the world.

Here, Amy Hind gives us a glimpse of her life in the countryside in America. 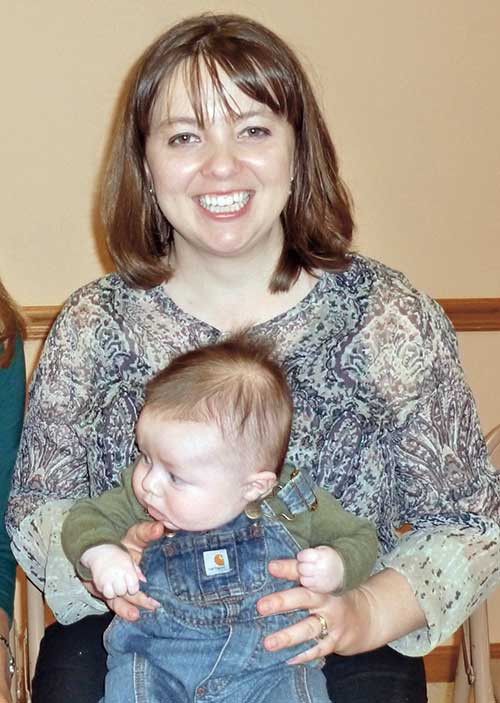 What sort of farm do you live on?

My husband Brian raises cattle and grows corn, soya beans, alfalfa, sorghum, rye and turnips. He comes from a long line of farmers and we live in the same house his grandparents lived in.

I rarely do any work directly with the cattle or crops. However, since we live 20 miles from a veterinarian/farm supply store/parts supplier, I often make “parts runs” or “vet runs” into town.

I transport my husband to different fields during planting and harvest time. There have been times when I have tried to help him when he was fixing machinery. I also work full-time for a school district in a nearby town.

We live in the Kansas flint hills, so there are lots of hills, trees, and grass around us – both pasture and farmland.

There is a lot of wildlife. Many times during the year we can look outside and see wild turkey or deer in one of our fields.

I have lived in Madison, Kansas, since 2005 and I have not heard of anyone in this area going bankrupt because of drought or problems with the economy.

From what I have observed, most farming families near us are either “managing” or “prosperous”. The farming operations in other parts of the US are so different from ours that I can’t really comment on how prosperous those families are.

What the best thing about living on a farm?

I love being married to a farmer. I feel like, as a farmer’s wife, I can play a role in continuing to grow the farm so that if our son wants to farm when he gets older, he will have that opportunity.

For me, the worst thing about living on a farm isn’t truly about farm life so much as about living in a rural area.

I lived in the Kansas City and Washington DC areas prior to getting married and it has taken me a long time to get used to not having my favourite restaurants and stores just down the road.

However, over the years I have come to appreciate the benefits of living on a farm and raising our son here rather than in a big city.

What’s the single biggest challenge farmers face where you are?

The uncertainty of so many aspects of their lives – for example, the weather, economy, government regulations, animal and crop disease.

My husband is a very good storyteller and I laugh quite a bit when he starts recounting stories about the people we know.

Most politicians. This includes our Kansas state politicians who are making one bad decision after another and national politicians such as Hillary Clinton and Donald Trump.

Is farming well supported by your government?

In some ways, yes. We have farm subsidies and crop insurance that help tremendously. And during recent years, when we went through drought, the US government did provide some monetary compensation for loss.

However, the government does have a lot of regulations. I’m thinking specifically about environmental rules that can often complicate things for farmers.

That’s not to say farmers don’t respect the environment around here. But more regulations typically mean higher costs for farmers.

I was once a vegetarian for a year, but then I went back to eating chicken, turkey and fish. And then, when I met my future husband, I started eating beef and pork again.