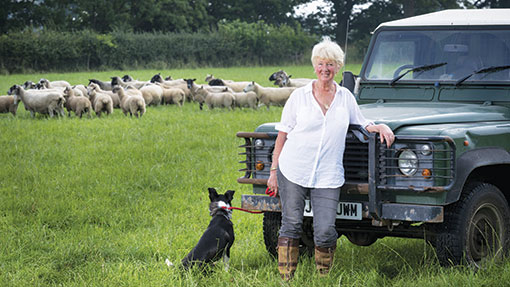 Catching the lambs to administer a pour-on to deter flies has proved a harder job this year than in the past.

The sheep are currently in a field well away from the corral, which itself has been a morass of mud because of frequent downpours.

We had thought we could catch the sheep in a temporary collecting area constructed of a trailer, electric fence, Land Rover, field gates and stack bars. The flock disproved this theory rapidly.

The only answer has been to walk the sheep through a wheat field, hoping they would use their common sense and go down the tram lines. Some did. Some didn’t.

The next obstacle on the route to the corral was a field the cows are currently grazing. Cattle are notoriously curious and interested in matters that are of no concern to them at all. Coupled with our slightly nervous young sheepdog Fizz deserting at speed, the sheep scattered to all four corners of the field.

Meanwhile Fizz, stone deaf to get-ons, come-byes and worse, had worked out a circuitous route that combined the finest points of geometry with geography, with the cunning of a dog that is fast learning that “she who jibs and runs away, lives to run another day”.

We have to go back three sheepdogs to recall one, Meg, who knew no fear. We were milking then and John had merely to let Meg out from her kennel to see her streak off, a black-and-white blur, straight for the furthest field on the farm where the milking herd was grazing.

Apart from a lonely lane, Meg had no roads to cross. John could confidently send her on, get the parlour ready for milking, amble on up to the field gate, and find all the herd waiting to come home. Anything, rather than be harried another minute by Meg.

She would have bred a marvellous strain of working dogs, but strangely, never once in all her life did she come into season.

Fortunately, Fizz managed to gather her courage once the cows lost interest in the sheep. She helped us push the sheep on and into the corral which, after a few days of sunshine, had dried up sufficiently to provide dry footing for the sheep.

Pour-on dispensed, we walked the flock back, this time at a sedate pace as they had all sussed out that following tram lines through the wheat was the way to travel.

Despite the fact that the corral had dried out, the tram lines through the wheat had not. As a result, the sheep arrived back in the field with mud-encrusted feet where the clay had worked its way up into the split in their hooves.

The spring in their steps, and ours as we were following them, was definitely less sprung. Feet of clay indeed.

Ongoing battle with slugs and snails

Farming on our heavy, clay-rich, land means that waging war on slugs and snails is an occupational hazard. If allowed to slither around unchecked, the marauding molluscs can terminally damage some of the arable crops.

But recent research has highlighted new methods. If you sling, or to be gastropod-friendly, gently remove a slug or snail at least 20 metres from their home patch, they will be unlikely to return. OK in a garden. Not much use in a large field.

This reporting of new-wave techniques and innovative approaches to controlling snail and slug populations reminded me of the time when funds needed to be raised for a local village fête.

The Great Snail Race was the visionary concept of my friend Shirley, and to gather up enough participants for her fundraiser, she turned to John to provide her with the runners. Or perhaps slitherers would be a better way of putting it.

He had reservations, but it was for a good cause, so John duly provided Shirley with a selection of slimy competitors.

In order to comply with gambling by-laws, punters were not allowed to bet on the snails. Instead they had to purchase their favoured snail for the duration of the race. Each snail then had a number painted on their shell that matched a list of royal names.

The racetrack consisted of a large board painted with concentric circles. To encourage the snails to race from the centre of the board to the outside, morsels of lettuce leaves were enticingly placed at the board’s edge.

Test slithers had been tried on a variety of surfaces, but chipboard seemed to give the best mixture of grip and speed to the snails. The whole affair was shrouded in secrecy to reveal no hint of form.

The day of the fête and race arrived. One owner complained he had been sold a dead snail, as Anne Boleyn refused to even waggle a horn in the race line-up. In the snails’ enclosure at the centre of the board, the Duchess of Cornwall was cosying up to Henry V111 and Queen Victoria was clearly not amused by Prince Harry’s antics.

A prim elderly lady who had only bought her snail after a great deal of persuasion was the most enthusiastic race supporter once the snails were off. “Move your a…” she shrieked in true Eliza Doolittle fashion.

Racing finished, there was the issue of the snails’ fate. No-one, especially us, wanted them back. Shirley considered a grudge auction, with the top buyers being able to empty them into the garden or field of the person they most loved to hate.

In the nick of time, before fate cast them into a bucket of salt, the school nature garden offered them a permanent home…..that is until they glided and slunk over the fence and away. Helix aspersa, living to race again another day.