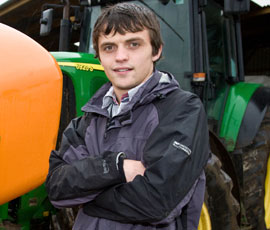 It’s a Tuesday lunchtime and my room stinks like a brewery. Before jumping to conclusions about a student’s lifestyle though, I think that I really ought to clarify something.

First, I can absolutely guarantee that the smell originates from stale beer and not from some kind of fungal infection – there is a slight, but very important, difference between athlete’s foot and brewer’s yeast, and though I concede that the words “student” and “personal hygiene” aren’t often found in the same sentence, I’d like to think that I’m not quite that bad.

Second, I do have an excuse. In the course of running a charity event, I literally got soaked in beer. I know that this sounds like a lot of people’s idea of heaven, but I can assure you that it was completely unintentional. Despite this setback I can say that the first Agric’s and VetSoc Beer Festival was – in the end – a great success.

I’ve been on the students union here at Sutton Bonington in some capacity or other for a long while now and I’ve helped organise a lot of events including our largest, the 12-hour Summer Ball. But even I underestimated just how much work goes into a beer festival.

I’m not going to bore you with the nightmarish logistical details, suffice to say it would be easier if there were either 36 hours in a day or (like a true student) I was able to drink enough Red Bull to keep me awake for five days straight.

The problems started with a distinct lack of ticket sales leading up to the event. By opening time though, I reckon the 45 voicemail messages on my phone were a testament to the fact that we could have sold a lot more tickets than the 250 available. I’d also like to make an appeal to the chavs of Kegworth who stole our banner: could we have it back please?

Apart from sampling the 12 barrels of beer, the most fun aspect was definitely hammering the taps into the barrels. I’d never done it before and, judging by the amount of beer that sprayed all over the ceiling of the Village Hall, I’d say it showed.

But six hours, 1,100 pints, 250 customised glasses, 150 burgers and three bands later, we’d raised about £1,300 for a local primary school – a fantastic return and thanks to everyone who attended and helped out on the night.

Back in the all-too-real world of academia, by the time this is published exams will be well under away once again. By my calculations I’ve handed in coursework totalling more than 30,000 words over the past 12 weeks. Thankfully, this means that I’ll only have to walk into the exam hall four times rather than the normal six. Unfortunately, those exams that are left still require a heap of revision and I’ve have had to reclaim my corner of the quiet room in the library.

We have got one thing to look forward to the other side of the exam season, however: the Sutton Bonington Summer Ball. This year Radio 1 DJ Greg James is headlining so it’s definitely going to be a night to remember.

Out in the field, I have to be honest and say that our Crop Challenge plot isn’t looking too great. Thinking that disease pressure was low and the crop appeared clean, we decided to take a punt and skimp a little at T1. If it doesn’t improve you might find me out there in the middle of the night with a rather large watering can and a big tub of Miracle Grow.

We’ve had even less rain at home than we have had near Nottingham and it’s looking like the vining peas are going to be incredibly early this year. For the second summer I’m spending the eight-week season working as a sampler for Fen Peas, a local vining co-op. It’s going to be a big shock getting back into the routine of waking up at 3.15am every morning.

Back at Sutton Bonington, and after an incredibly enjoyable year, a fresh committee has taken over the reigns of the Agricultural Society. In a moment of sheer madness though, I may well have put my name down to run for the chair of the students union. I’ll let you know how campaigning goes…