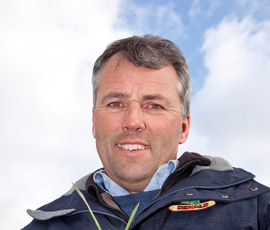 A farmer who launched a campaign to get free forage to snow-hit hill livestock producers says he has been overwhelmed by the response.

Forage worth £60,000 has been donated since Lincolnshire grower Andrew Ward launched the appeal less than two weeks ago.

Mr Ward, who farms at Leadenham, started the campaign after deciding he “couldn’t sit back and do nothing” while he had forage in the barn and other farmers had none.

Since then, four lorry loads of donated forage have been transported free to livestock farmers in the north of England and Wales. Two more loads are to follow, with more to come.

“I’ve been overwhelmed by the generosity of both farmers and hauliers,” said Mr Ward. “I don’t think one person I have contacted has said they can’t help.”

Mr Ward sent a load of his own haylage to Cumbria last week, transported free by Househam Sprayers, and appealed to other farmers to do the same.

Two Essex farmers have sent a load of forage to Northumberland. And two loads from Kent have been sent to Oswestry and Welshpool.

Another load is being sent to Yorkshire and a further load is due to go to Abergele, north Wales.

“We need more hauliers – it costs a lot of money to transport forage and we can’t expect the same hauliers to take lots of loads,” said Mr Ward.

“Everybody has been really generous – and I am very conscious that it costs a lot of money to haul forage.”

Mr Ward added: “It is taking a lot of time, a lot of phone calls and a lot of work, but it is worth it – the situation in the hills is desperate.”

To donate towards forage costs, visit uk.virginmoneygiving.com/forageaid. Farmers in need of forage should contact the Addington Fund on 01926 620135 or by email at enquiries@addingtonfund.org.uk.