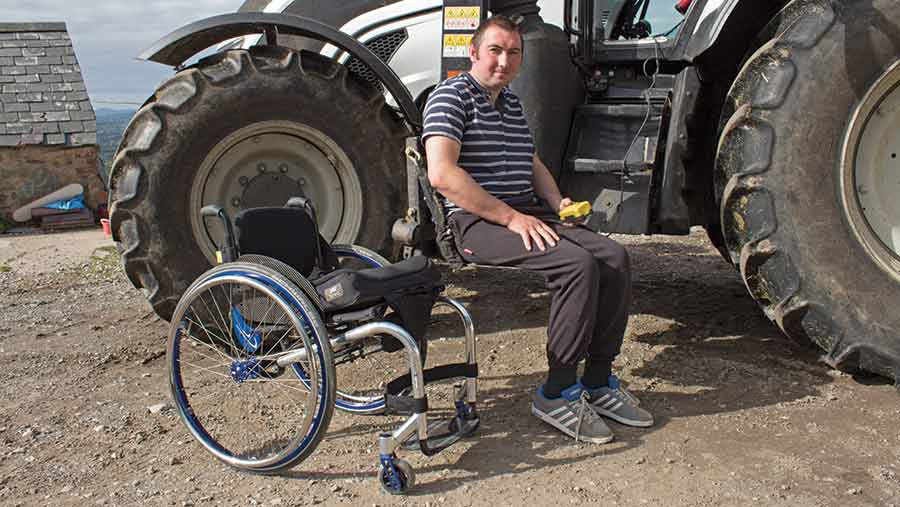 While walking home with friends on a dark country road after the annual Denbeigh and Flint agricultural show he was struck by a car and permanently paralysed from the chest down.

But despite his injuries, Mr Evans was determined to get back to work on the family farm in Bodfari, north Wales and to continue with his contracting business.

“I always knew I would get back to work, no matter what it took, and my aim was to be able to drive a tractor within a year,” he says.

From his hospital bed he began his research and looked at ways he could adapt his machinery so it was possible for him to use it.

He quickly realised his existing semi-powershift tractors wouldn’t be suitable, so the only option was to trade in for a more expensive machine with a CVT transmission. Even then, it would need some pricey modifications in order for him to get in and out of the cab and be able to drive it safely.

Mr Evans’ first step was to contact his local Valtra dealer – John Bownes – and do a deal on one of the Finnish maker’s revamped T-series machines with a CVT transmission. In the end he opted for the T144 Direct model with a max power of 155hp.

Next he started scouring the internet looking for ways to adapt the tractor. That’s when he stumbled across the government’s Access to Work service. This aims to get people with disabilities back into work and will provide funding to help them do it.

“They were brilliant,” he says. “I phoned up, explained my situation and they got to work on it immediately.”
Shortly afterwards Mr Evans was given a grant to cover the cost of any modifications that needed to be made and it even paid the difference in price between a new semi-powershift Valtra T-series and its CVT equivalent.

After that, Laura Bownes, John Bownes’ north Wales sales rep, took over the job of prepping and modifying the tractor, as well as sorting the finances out with Access to Work.

In-cab modifications were fairly straightforward and included hand levers for operating the clutch and brake pedals. However, because the tractor is a CVT, they don’t get used that often.

The task of getting Mr Evans in and out of the cab was more of a challenge, though.

To help solve that problem, Ms Bownes approached Cheshire-based engineer Andrew Stubbs and asked him to build a custom lift Mr Evans could operate himself and would fold away neatly.

Mr Stubbs’ plan was to have the lift completed in about two weeks, but due to the complexity of the task it ended up taking nearer two months to get it right.

The final version mounts on the tractor’s chassis rail and uses an electro-hydraulic ram for raising and lowering that is activated via a remote control.

All of this was completed by June 2015 – 10 months after the accident – and when the tractor arrived, Mr Evans had got himself fit and well enough to get in and drive it.

“I was a bit unsteady at first as I don’t have enough control of my lower back muscles to keep me steady, but I soon got used to it,” says Mr Evans.

It was only after he got back in the seat that his friends and family owned up to the fact that they were worried he would never be able to get back behind the wheel of a tractor again.

“It just goes to show what you can do if you put your mind to it – I wasn’t going to let anything stop me, he says. “I also had amazing support from my friends, family, my fiancée Elinor and Rabi [the Royal Agricultural Benevolent Institution].”

Now that he has managed to get back to work, Mr Evans wants to help people who are in the same situation he was.

He has already been in touch with two people who have had accidents like his and he has giving them advice and support to get motivated and return to work.

“You just have to put yourself out there and get on the phone. Don’t be afraid to ask for help and most important of all, don’t let yourself be beaten,” he says.

If you have been injured or have a disability and need help to get back to work you can apply for an Access to Work grant.

The government-supported scheme is there to help you get back to work and will cover many of the costs of adapting your place of work so you can carry on working.

Amounts offered vary according to your individual circumstances and are capped at £40,800/year.

The first step is to contact Access to Work and tell them about your situation. Call 0345 268 8489 or email atwosu.london@dwp.gsi.gov.uk. You can also find more information on Gov.co.uk.