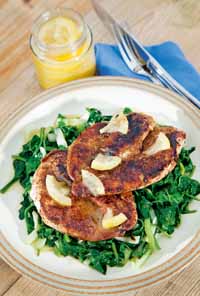 I’ve often thought of the art of preserving foods as a kind of alchemy in that you take humble raw ingredients to craft something almost magical. What began as a fairly crude way of preventing spoilage developed into a higher culinary art.

This process of metamorphosis certainly applies to these preserved lemons which impart a fragrant, sweet, yet sour taste to tagines and salads and go especially well with lamb and chicken. You can find these salted lemons in specialist shops usually whole or in quarters.

I find this homemade method easy and in some ways better, as the pieces are smaller and it does not contain any chemicals. Once pickled, you can eat the whole thing, including the rind, and in time the liquid in the jar goes syrupy and is fantastic brushed over fish before grilling.

This chicken dish, which makes use of the lemons, is a simple one which doesn’t require too much preparation and its quick cooking time fits in well with my ever increasing workload as a taxi service for teenage children.

I find that the problem with most chocolate soufflés is that they never taste chocolately enough. This isn’t a true soufflé but it’s wonderfully chocolately and again is quick and easy to make. If that was not enough, it has another attraction. If allowed to cool it will sink as soufflés will, but served like this with a dollop of clotted cream and it is the most delicious chocolate pudding.

Butterfly the chicken breasts and flatten them out a little bit. Rub the spice mix well over both sides of the chicken. Shred the pak choi and prepare a pan for steaming the greens a little later. Heat a pan large enough to take both breasts and put in one tablespoon of the oil. When the oil is hot put in the chicken and fry on both sides until nicely browned. Then turn the heat down to cook the chicken through.

Steam the spinach, rocket and the prepared pak choi and lightly season. Remove the chicken from the pan to a plate and keep warm. Place a tablespoon of water into the pan to lift all the flavour and residue from the pan. Chop the preserved lemon and add this to the pan with two teaspoons of the lemon juice from the jar. Stir in the other tablespoon of the oil and any juices that have come out of the chicken. Make a bed of the greens on each plate, place the chicken on top and spoon over the pan juices. 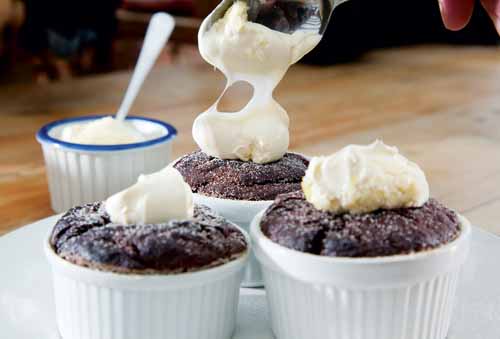 Preheat the oven to 190C (375F, Gas mark 5). Brush the lip and inside of the dishes with a little melted butter and coat with a little caster sugar. Melt the chocolate then whisk in the butter until the mixture is smooth. In a separate bowl whisk the eggs and the sugar to the ribbon stage. Then fold it into the chocolate mix. Pour into the dishes to just about ? full. Stand the dishes in a shallow pan of hot water and bake for approximately 20-25 minutes until well risen. Either serve immediately or allow to cool when the puddings will collapse; either way they are delicious. They can also be microwaved successfully for serving later. Serve with clotted cream.

This recipe makes quite a lot but it keeps well and you will find plenty of other uses for it. Ready to use about four days later.

Top and tail three of the lemons and cut in half lengthways. Cut into slices removing any pips as you go. Place a layer of lemon in the jam jar and sprinkle generously with the sea salt. Keep layering up the lemon and salt until you have used all the lemon. Squeeze the juice from the other two lemons and top up the jar. Put the lid on it and leave on a shelf in the kitchen for about four days. You will notice that after this time the lemon takes on a “cooked” appearance – this is when it is ready to use. You can now store it in the fridge and it will last indefinitely.