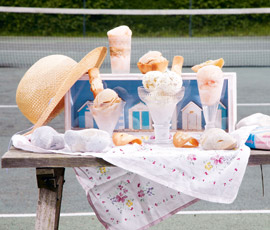 One of the telltale signs of summer has finally arrived. I’m collecting the children from school and the first child complains that it’s been too hot, quickly followed by the second who says she’s hungry and asks, “Mummy, can we stop for an ice cream?”

My initial dismissal of their request is then met by them starting up a repetitive chant of “I scream, you scream, we all scream for ice cream”.

My resistance holds out against the added hand-clapping, but usually weakens when this is accompanied by their foot-stomping on the floor of the car, although by now I secretly fancy an ice cream as well and we end up stopping off at the village shop.

It seems strange that despite being addicted to the likes of The X Factor and Britain’s Got Talent, the children still sing the chorus of a song released in the 1920s (by Waring’s Pennsylvanians, in case you’re wondering). But maybe this just mirrors our eternal affection for frozen delights – the brown bread recipe featured here can be traced back to 1772.

Making ice cream with an ice cream maker is easier for me, as the machine does all the churning and freezing and it’s ready in about 30 minutes.
If you don’t have a machine, that’s not a problem, as all you do is pour the mixture into a plastic container and freeze for one hour, remove it and fork through, mixing the frozen edge into the middle to break up the ice crystals, and then repeat this process twice.
So enjoy making and eating at least one of these summery sweet treats. All together now: “I scream, you scream…” 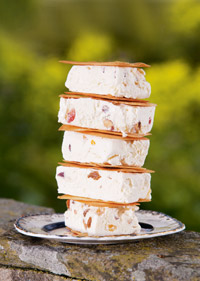 For the ice cream

First make the ice cream. Soak the sultanas in a little sherry overnight or, if you don’t want to use any alcohol, soak them in black tea. Mix together the cherries, sultanas, peel and nuts. Whisk together the eggs and sugar until you have a thick foam, (probably best to do this mechanically). In a separate bowl, whip the cream into soft peaks. Now fold all the ingredients together until well mixed. Place the mixture in a shallow tray to give a thickness of about 3cms. Freeze overnight.

For the wavers, place the butter, sugar and flour into a bowl. Chop the butter into small cubes and rub it in to the flour and sugar mix. Add the egg white and beat until smooth.

Preheat the oven to 190C/375F/gas 5. Make a cardboard template about 8x4cm (3×1 in). Spread the mixture, wafer-thin, on to baking paper and bake for 8-10 minutes until golden. Remove from the oven and while still warm cut them to size using the template. When they cool they will go crisp.
Place in an airtight container. To serve, remove the ice cream from the freezer and, using your template, cut the slab into rectangles. Sandwich the ice cream between two biscuits and serve.

Simply stir the sugar into the grapefruit juice until it has dissolved and put through an ice cream machine if you have one. If you don’t have a machine, pour the mixture into a plastic container and freeze for one hour. Remove and fork through, mixing the frozen edge into the middle to break up the ice crystals. Repeat twice.

Melt the butter in a frying pan, add the breadcrumbs and cook over a low heat slowly to get the breadcrumbs fried and crisp but without getting them too dark. Sprinkle over the caster sugar and continue cooking until the sugar caramelises. Spread them out on a tray to cool down.

For the ice cream

Split the vanilla pod, scrape out the seeds and put them all into the milk in a saucepan. Place the egg yolks and sugar in a bowl and mix to amalgamate. Bring the milk to the boil and then whisk it into the yolks and sugar. Remove the vanilla pod. Put the mixture back into the saucepan and place it back over the heat. Cook carefully until the mixture thickens (it must not boil) and can coat the back of a spoon. Remove from the heat and immediately strain into a clean container. Stir in the double cream. Chill the mixture in the fridge, preferably overnight, then churn in an ice cream machine if you have one. If not, follow the freezing instructions for the sorbet. Sprinkle in the caramelised brown breadcrumbs and give it a good stir just before the ice cream sets. Transfer the ice cream to a container and then into the freezer. Eat this within two days as the breadcrumbs will not remain crunchy indefinitely.

To make the caramel, put the granulated sugar in a heavy-based pan over a low heat. Keep shaking the pan as the sugar melts (do not stir). Cook the sugar to a rich caramel colour and when the desired colour is reached, pour in the cream (take great care as it may well spit and bubble). Simmer until all the sugar is melted. Place the egg yolks and caster sugar into a bowl and whisk together. Add the milk to the caramel/cream mixture and bring to the boil. When it is boiling pour it onto the eggs and sugar. Return the mixture to the pan and cook gently until it thickens (coats the back of a spoon). Strain into a clean container and cool. Refrigerate overnight and the next day churn it in the ice cream maker (or see sorbet instructions).