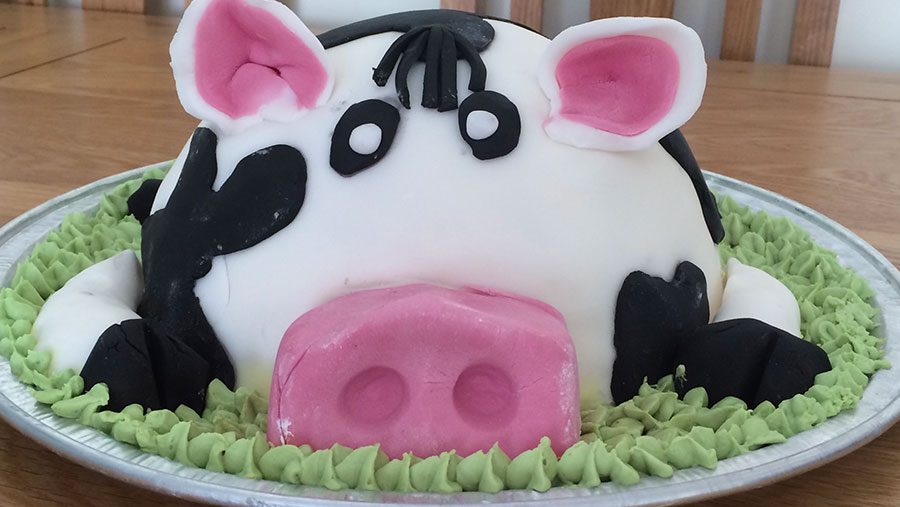 Never mind The Great British Bake Off, Farmers Weekly readers are in a class of their own when it comes to cakes.

This tasty selection shows that, when it comes to creations with an agricultural theme, there are no limits to readers’ imagination and skill in the kitchen.

Pictures of cakes of all shapes and sizes have come in from across the nation.

Thanks to everybody who’s shared their photos. Please keep them coming. We’re just sorry we didn’t get to sample the cakes too! 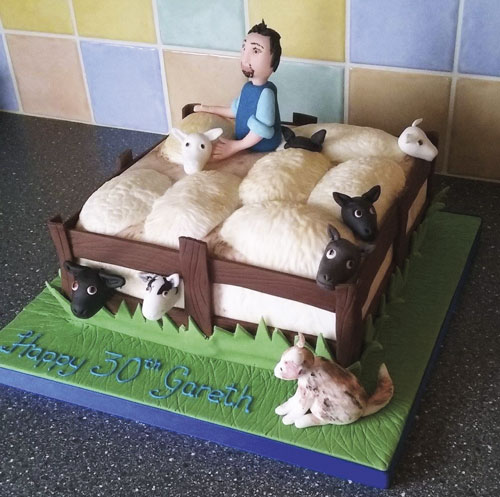 Victoria Davies of Llanybydder in Carmarthenshire made this pen of sheep with the man standing among them for a sheep grader. “It is actually a square cake decorated with sugar paste to look 3D,” explains Victoria, who rears dairy heifers and keeps sheep and has been making cakes for nearly 30 years. 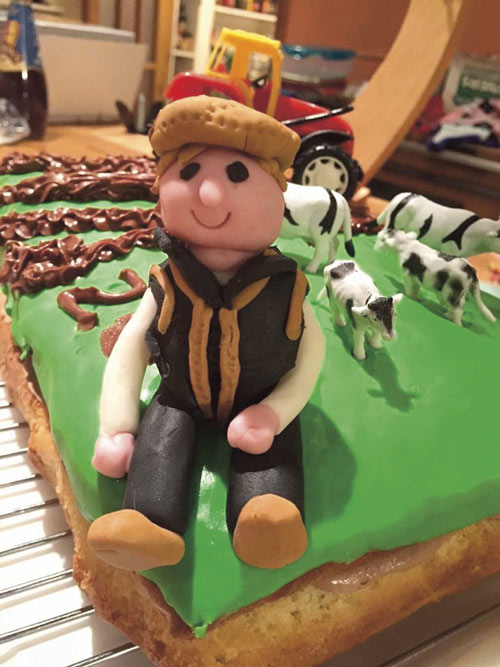 Harper Adams University student Rosy Louis made this for her boyfriend’s 21st birthday. 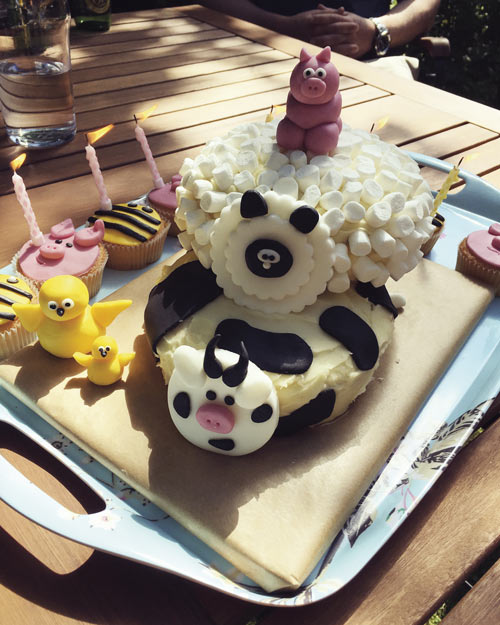 Amanda Gray of West Sussex baked this for her sister’s 29th birthday. “We spent the day at the farm, and then I surprised her with it,” she says. 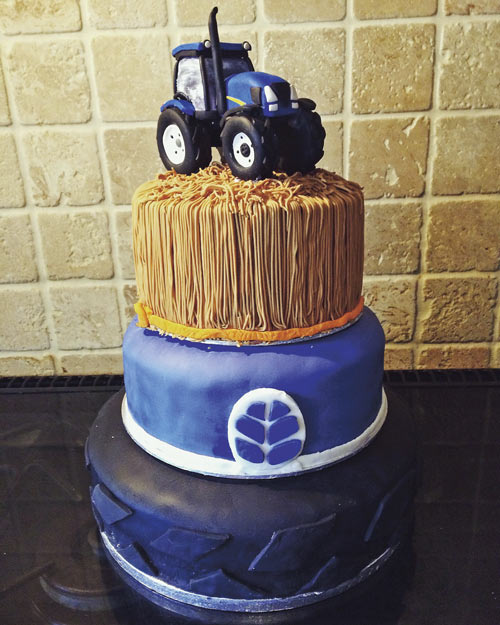 Charlie Cunningham says: “This amazing show-stopper was made by my mum, Jane, for my New Holland-mad brother-in-law’s 21st birthday.” 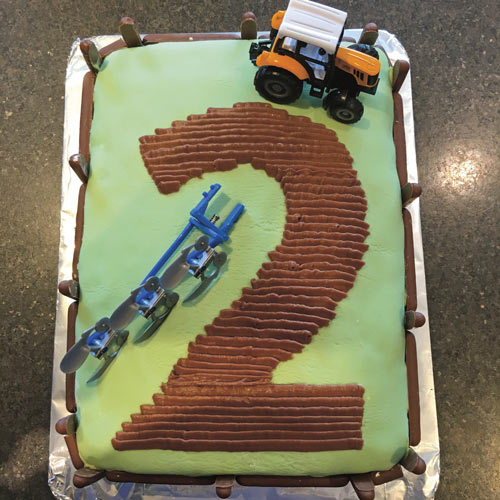 Morwenna Peters and her husband created this for their son, who recently celebrated his second birthday. “Oliver’s grandparents are farmers in Cornwall and he is tractor mad,” explains Morwenna. 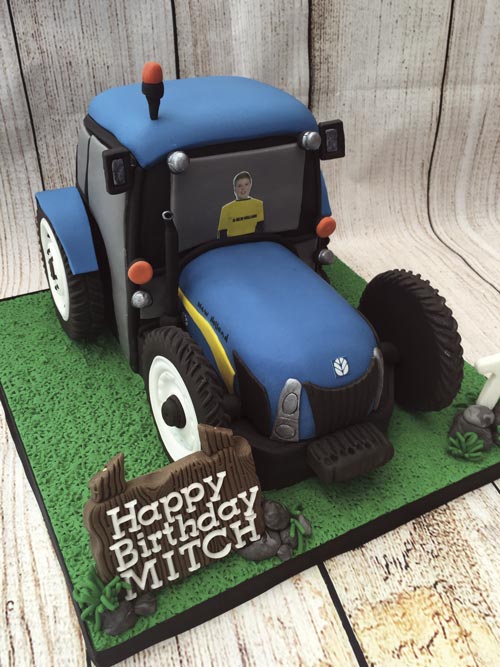 Lorraine Yarnold made this Massey Ferguson for a friend’s son, who was celebrating his 16th birthday.  “It took many hours to create,” she says. 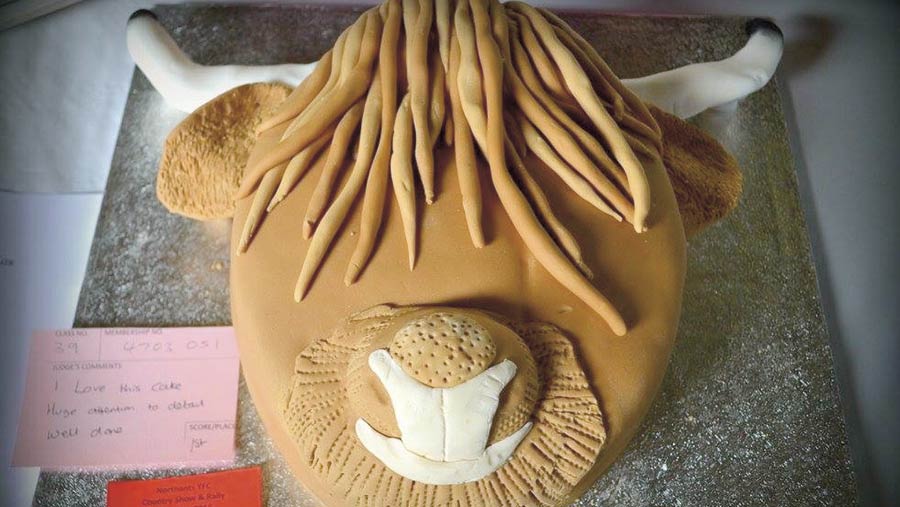 Charlotte Foster made this for a Young Farmers rally. The theme was ‘Farm Animals’.

A friend’s son fifth birthday provided the inspiration for Donna Postlethwaite with this one. Donna says: “His daddy has a Massey tractor and they have pigs in the shed – plus he loves chocolate.” 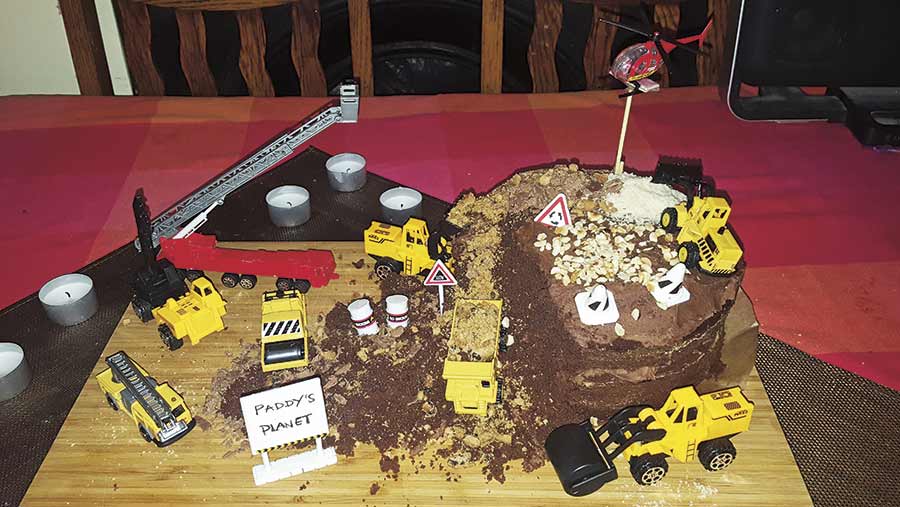 Mary-Jane Lawrence did this “quarry cake” for her partner. 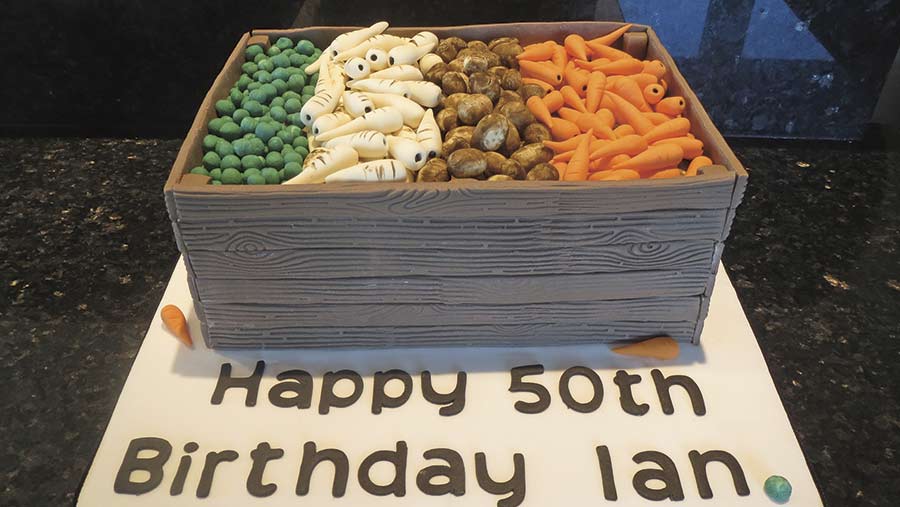 This potato box filled with carrots, parsnips, sprouts and potatoes was created by Rachel Hinchley of Epperstone in Nottinghamshire for a friend’s 50th. 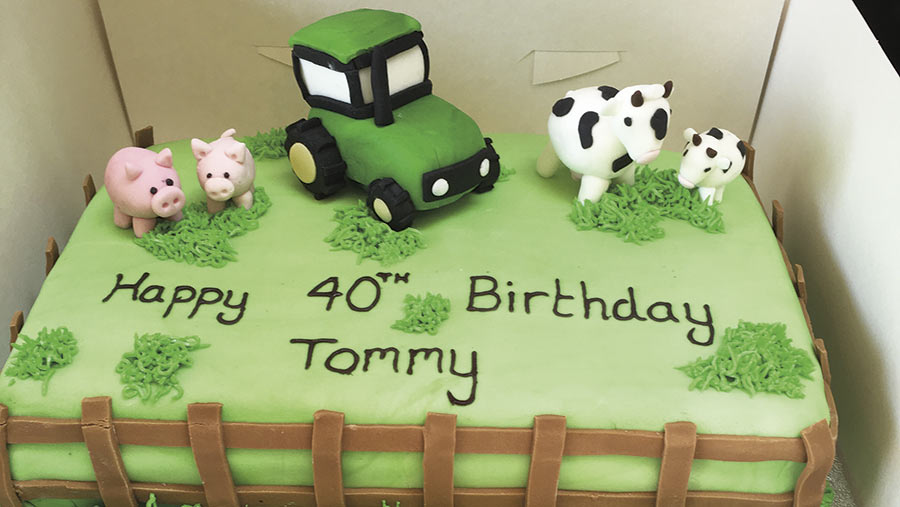 The occasion of her uncle’s 40th birthday prompted Corrine Anderson to make this. “He works alongside his parents on their farm as a very dedicated farmer in Week St Mary, Cornwall,” she says. 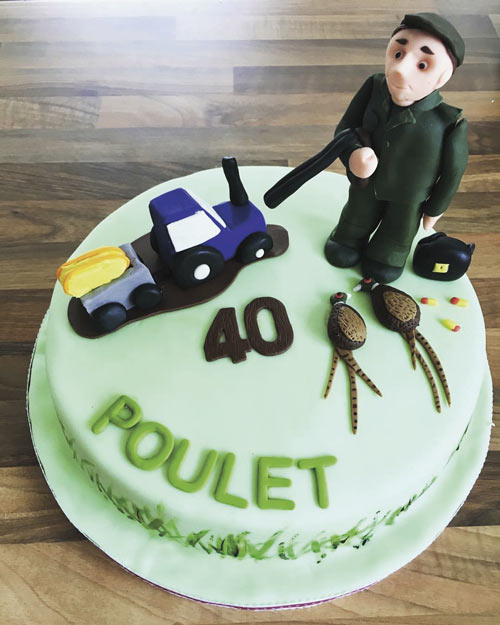 Polly Bishop shared this one… 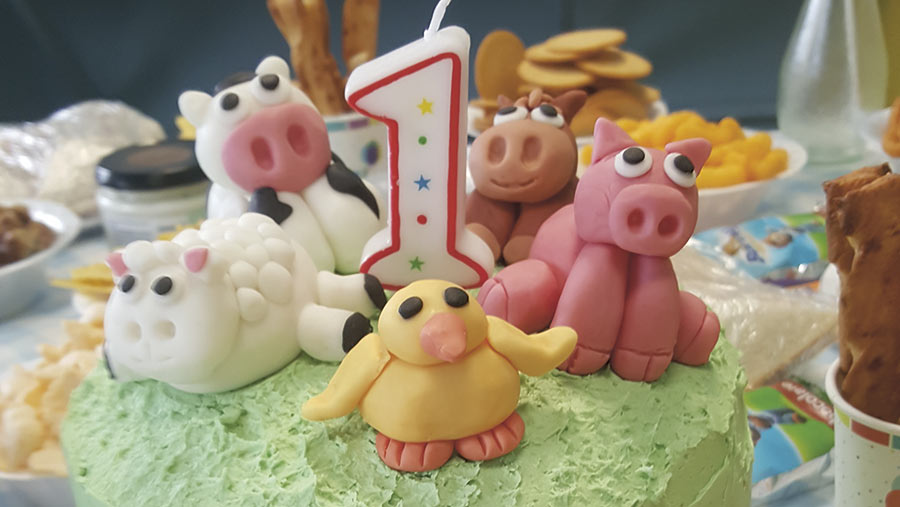 Lucy Babb sent us this picture of her son Tyack’s first birthday cake that she and her best friend made. “He is animal and farm crazy and loves doing the daily routines out on our farm,” Lucy says. “Inside… it was a rainbow cake with many different colours and layers of sponge. We also made matching cupcakes.” 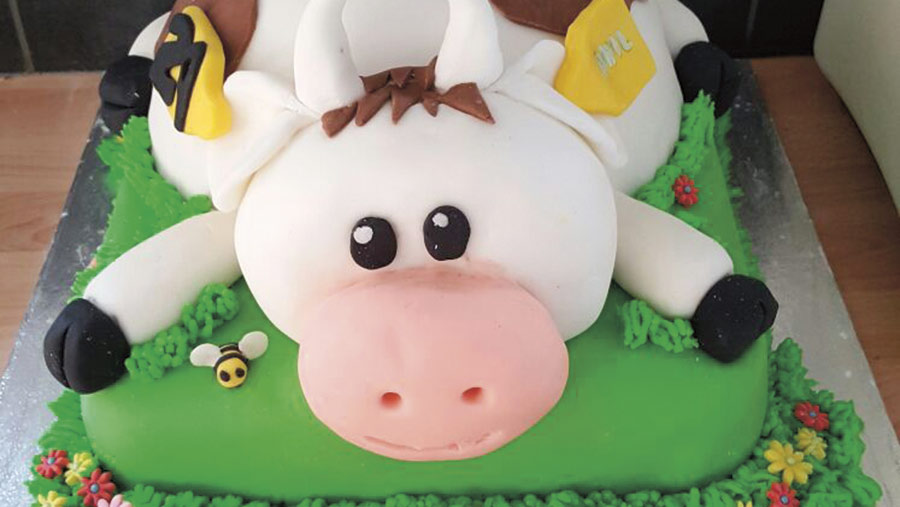 Carly Worrell from Cockermouth baked this for her boyfriend’s birthday. “He’s a dairy farmer who has pedigree Ayrshires,” she says.  “I added the tags in the ear to have his age in one side and his name in the other.” 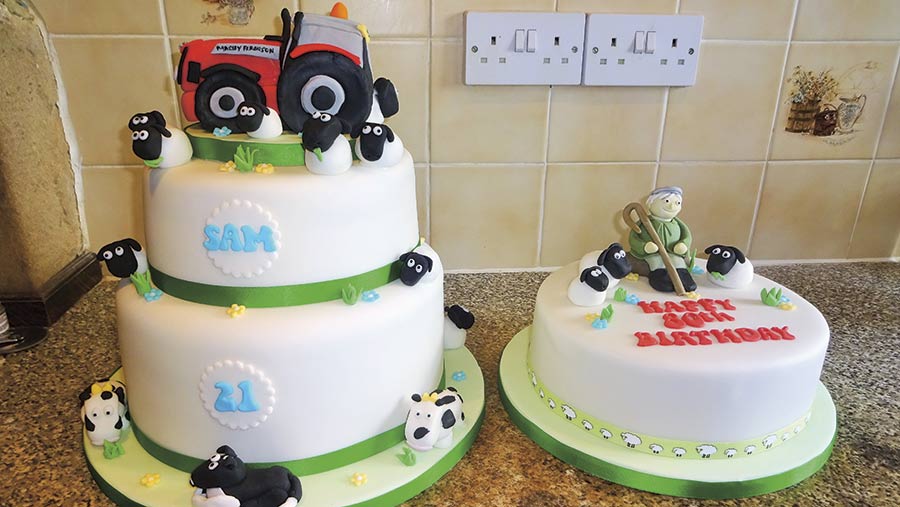 These are two “special, big birthday cakes” Paula Marshall made last August for two generations of her family. “My son Sam was 21 and my father-in-law Graham was 80 within a couple of days of each other,” she explains. “We are dairy and sheep farmers in Derbyshire and I love making farming-themed cakes for family and friends.” 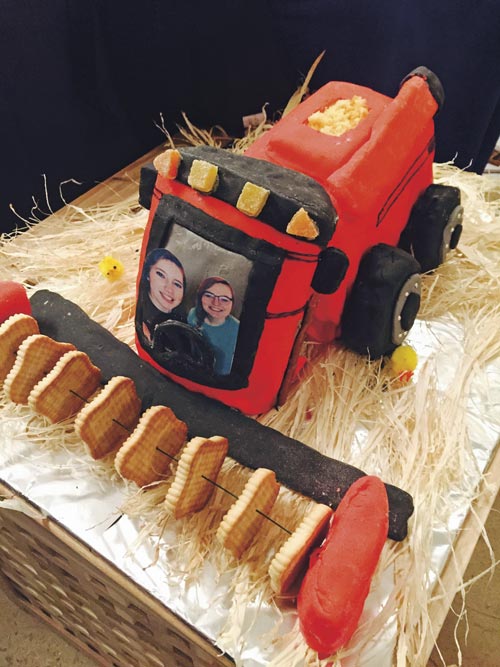 Flatmates Poppy Lewis and Sarah Febry made this combine harvester cake for a uni bake-off at Sutton Bonington to raise money for the charity Vets in the Community. 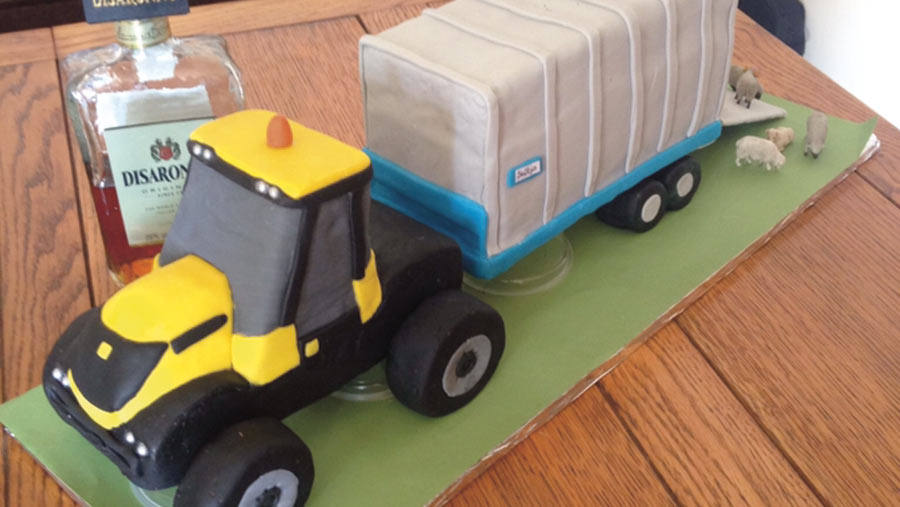 “This was my 21st birthday cake made by my talented mum,” says Sally Griffiths, from Penistone in South Yorkshire, whose main job at the time was hauling sheep about all day every day.