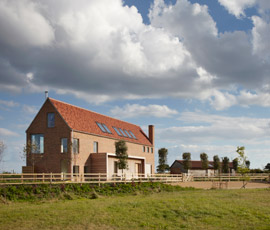 A modern take on a traditional Suffolk farmhouse has been named the Grand Designs Home of the Year for 2013.

Architect Lucy Marston built the award-winning family home in an area of Outstanding Natural Beauty near the seaside town of Southwold in Suffolk.

When she and her husband bought the plot it was home to a disused farm with a number of ramshackle buildings, including a big industrial barn and a derelict farm cottage.

Determined that the site’s farming history should inform its future, Lucy looked to local farmhouses for inspiration.

“There has always been a farm there, so when I came to design the house I wanted it to belong to the family of buildings that was there and had been there for centuries,” she said.

A familiar sight throughout the county is the traditional Suffolk “long barn”, characterised by its long timber-framed building and steeply pitched roof.

Lucy took the idea of the long building with its linear layout of rooms to structure the new house. The timber frame was clad with traditional lime mortar brickwork and roofed with curved terracotta tiles.

Like farmhouses up and down the country, she also designed the kitchen to be the hub of the house. She incorporated a huge inglenook fireplace into the lounge and deep-set windowsills big enough to sit in – a reference to the thick-walled farmhouses of years gone by.

But alongside the carefully planned heritage features, Lucy also introduced the best that modern, energy efficient architecture has to offer.

The house has much bigger windows than a typical long barn, to get the full benefit of the views and allow light to filter in from dawn to dusk. Rooms are connected by sliding doors to create flexible spaces and the traditional timber frame is injected with recycled newspaper insulation to minimise heat loss.

Since it was completed in 2012, it has collected a string of awards and titles including the Grand Designs Home of the Year gong.

Kevin McCloud, who presents the Channel 4 architecture show Grand Designs, visited the house during judging and was won over by its perfect balance.

“It feels welcoming, homely, impressive, yet not showy, considered yet natural, new, yet established,” he said. “We all wanted to live in it.”

Read our Field Day blog for daily posts on the quirkier side of rural life.