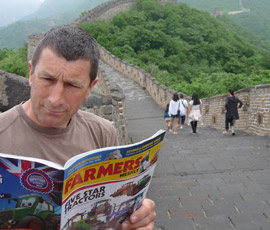 Readers love sharing pictures of themselves and their friends with copies of Farmers Weekly in unusual places.

We’ve got so many that we’ve opened a gallery for them called FW on Tour – shots of you at home and abroad with a copy of your facourite read in places where you wouldn’t normally expect to see Farmers Weekly.

It contains pictures of you at sporting occasions, at famous landmarks, on holiday (remember those?) and in far-flung reaches of the globe.

Here are a few of the more recent additions including Trevor Davey’s snap shown above. Mr Davey, Bishopsteignton in Devon took his picture with the magazine on the Great Wall of China. “While waiting for my wife and children to catch their breath, I thought I’d check out the tractor review,” he said.

If you’d like to share your pictures, either upload them directly to the gallery or email them to fwfarmlife@rbi.co.uk with a few details about where and when they were taken.