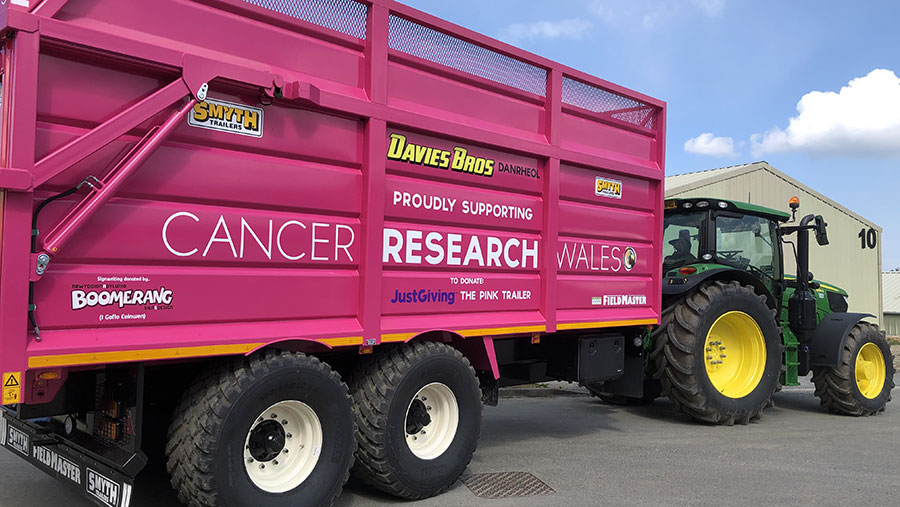 A Carmarthenshire contracting business – Davies Bros at Danyrheol – is raising money for a cancer charity in an unusual way – with a bright pink silage trailer.

The eye-catching idea was the brainchild of brothers Lyn and Huw Davies, who are raising money for Cancer Research Wales.

Jane, Huw’s wife, was diagnosed with breast cancer five years ago and is currently having treatment after the disease returned.

“Our family has been struck by cancer more than once and the heartbreak and sadness that it brings makes us determined to help those who are affected by this horrible disease,” said Huw.

“Jane’s strength through treatment and her determination through life has amazed not only our family, but also the people in our community. 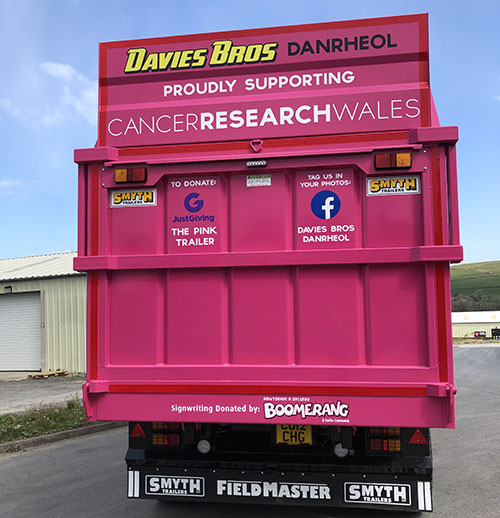 The Davies’s JustGiving page has already raised £7,000 and more donations are flooding in, as the trailer is spotted out and about in the Carmarthenshire countryside.

Jane said: “As contractors, we get new trailers every year and when my husband was asked what colour we wanted the trailers painted, he said as a joke ‘pink with black spots’. When he told me about the conversation, we started thinking ‘why don’t we have a pink trailer and use it as a way to raise money for a charity?’”

She added: “We were silaging the other day and driving it along the A40 and so many cars were beeping their horns, giving us the thumbs-up and waving.

“One client phoned specifically asking for it – because his wife has recently been diagnosed with cancer. We think this is the first pink trailer in the UK, but we might even get another one next year.

“We wondered whether some of the drivers might not want to drive a pink trailer – but they’ve been fighting over it!”