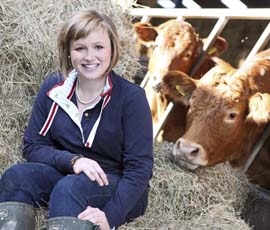 On Valentine’s day this year I wasn’t taken out for a meal at a fancy restaurant, nor was I showered with any gifts. Instead, I spent the most romantic night of the year at Harper’s very own version of the cult ITV dating show Take Me Out.

Our vice-president Rory Craig took the role of presenter Paddy McGuinness and we had a line-up of six eligible bachelors, 14 young ladies and one questionable young man in drag – all hoping to be whisked away for a date at Nandos. It was a huge success and the SU bar was fuller than I have ever seen it before.

Almost as busy was Public Speaking Day at Staffordshire YFC – one of the most popular events in the competitions calendar. The day ran without any mishaps, although my teammate Toby and I probably should have spent a bit more time writing our speech for the Eccleshall debating team. We had to oppose the motion that ‘Prince Philip should be applauded for returning to his public duties’ and it didn’t read too badly in the end. However, we did come up with some horrendous jokes relating to his ‘wan shooting antics.

On the subject of shooting, the following weekend I managed to persuade the Eccleshall boys to teach me how to handle a gun at a clay pigeon competition. With the gun in hand, my first question was: “What happens if I shoot someone?” Following that I’d be amazed if they ever let me loose with a weapon again.

Since becoming county officer within YFC, I seem to have got myself involved at both an area and national level. I attended my first ARAC (Agriculture & Rural Affairs Committee) meeting this month. It was an intense few hours with stacks of information to take in, but I learnt a lot more about CAP and all the great work that NFYFC are currently involved in. One key message I took away with me was the importance of YFC members sitting on a range of other committees, such as NFU boards, the Green Food Project and the CLA. Apparently, the average age of committee members is usually around 60, giving young farmers the opportunity to bring a completely different outlook to the table.

Some 150 young farmers attended the NFU Conference this year, and once again I was given the opportunity to attend by kind sponsorship from West Midlands Area NFU. The 2012 event brought with it a new venue and tighter security because of the badger cull protestors, some of whom I am sure were trying to impersonate my dad. For all those who don’t know Bryan Wilson, he has black curly hair and beard, complete with his very own set of badger stripes.I must admit that while waiting in the awful congestion to reach the conference we were not particularly enamoured with the new venue, however, in the end the ICC accommodated the event extremely well. There was a fantastic standard of speakers, from Caroline Spelman and Jim Paice to first-generation farmer Robert Law. Fellow Young Farmer Matthew Sharp and I took the opportunity to talk to Robert about next generation of farmers following the conference dinner. He said that a major barrier to their business is always the availability of skilled farm workers, and stressed the importance of attending a college as you learn so much and make so many valuable contacts.

The rest of my time has been taken up by the Varsity Ploughing Match and the BUCS Shooting Competition. Unfortunately Harper didn’t manage to retain the ploughing title, but it made for a fantastic social and was followed up by a DJ set from Scott Mills in the SU bar. I can’t tell you much about his DJ skills because I was stuck in bed with a stomach bug, but who needs Scott Mills when you’ve got the Wurzels to look forward to?

Next up are the SU elections, which promise to be highly amusing this year. All the elected candidates will be driven to a top secret location, dropped off and challenged to find their way back to Harper without a phone or money. With all that in store for the new SU members, I’m starting to get a little bit concerned about what they might have in store for me, but perhaps I should be more concerned about what’s going on at home.

After speaking to Dad, you would think that we had a thousand ewes to lamb at the farm this spring, but the turmoil is actually being generated by my sister. After promoting herself to the position of ‘farm manager’, she decided to introduce a new record-keeping system, and it’s driving him mad.

Read more from our College Calendar writers on our dedicated page.