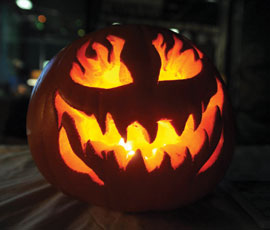 Spalding has long been associated with the bulb-growing industry and its historic Flower Parade, but more recently the Lincolnshire market town has been drawing crowds for another reason.

The area is home to Europe’s biggest pumpkin farmer and, in homage to this crop, a modern-day harvest festival celebrating this giant among vegetables has developed.

Now in its 12th year, the Spalding Pumpkin Festival, which started life as a day-long event culminating with a torchlit procession around the town centre, spans a whole week.

None of the festivities would be possible without the support of farmer David Bowman, whose family has been growing pumpkins for more than 40 years. He donates thousands of his giant vegetables for free, for local children to decorate and carry in the parade.

The Bowmans’ involvement came about after being approached by council officers who, under the impression they were one of several large squash growers in the area, wanted to stage an event to support their pumpkin farmers. In reality all the crops in the district belonged to the family, but nevertheless they embraced the idea and the Pumpkin Festival was born.

“I was initially asked to supply a few pumpkins for the local schools – now it costs us around £10,000 a year as we supply several thousand,” says David.

“I really like being involved. I sit on the organising committee and really enjoy the firework finale.

“Plus it’s nice being able to give something back to the community – it really is a community event as everyone gets involved. Even the really little children can decorate a pumpkin with some supervision. They like scooping the seeds out and getting all messy.”

The festival, which takes place on Friday 5 October this year, attracts crowds of around 10,000 to share, sample and celebrate all aspects of the pumpkin.

The town is transformed into a sea of orange, with stalls selling all manner of pumpkin produce, from cookies to cakes and soups to pies, while other entertainments include cookery demonstrations, pumpkin carving, street entertainment, live music, a children’s fancy dress competition and firework finale.

For many, the highlight is the torchlit parade, which includes an appearance by the Spalding Flower Queen riding in a specially designed “Cinderella” pumpkin carriage.

Local traders also get in on the act with pumpkin-themed events, while schoolchildren enjoy decorating their Jack O’Lanterns and older students compete in a new addition to the programme – a pumpkin-throwing contest, designing their own catapults and trebuchet in a bid to land the coveted title of top hurler.

The Bowmans grow between three and four million pumpkins a year, on 500 acres of Lincolnshire’s finest silt soil, all located within a 10-mile radius of Spalding.

Around 80% of the farm’s pumpkin crop stays in this country, going to the supermarket chains in the days leading up to Halloween, while the remainder are shipped to Germany, Holland, Ireland and Spain.

There are more than 500 pumpkin varieties, but Mr Bowman sticks to growing just a handful, although he is currently trialling more.

“We grow only four or five different sorts at most, as the majority are just too big for what our customers want,” says David. “Anything over 17lb or 18lb and they just don’t want them – ideally they’re looking for 8-10lb vegetables.

“Harvest Moon is one of the most popular ones we grow, but some years it can go rotten and you end up losing 30% of the crop.”

Every supermarket has its own size requirements and specifications, while the pumpkins retail anywhere from 50p up to £4.99, although the Bowmans don’t get anywhere near this price, as margins are going down.

Although well suited to Lincolnshire’s silt soil, the pumpkin is temperamental to grow. “They don’t like the cold and the wet and that’s just what they’ve been getting this year,” adds David.

“Last year was bad too because it was so dry. It’s a very unpredictable crop.“We do our planting in late May – you can’t drill them too soon because of the possibility of a late frost. It’s then basically keeping them clean of weeds until mid-July; after that the plants cover the ground and do their own weed control.

“We start harvesting at the beginning of September and everything has to be sold by about 29 October – there’s just no market for them after the 31st.

“Everything is so last-minute now. We’re practically getting down to the last two weeks in October, as nobody wants anything before then and one of the supermarkets is only in the job for 10 days.

“Thankfully we’ve got a good storage facility here in Spalding, which we’ve invested in heavily over the years.”

Harvesting the pumpkins is extremely labour-intensive, but as the work is seasonal the farm relies on agency staff. It employs 120 people at peak times, while the rest of the year there is just one employee, one office worker and David himself.

The family has been growing vegetables in Spalding since the end of the Second World War, when David’s father Edward cultivated crops including red cabbages, courgettes and marrows for Branston Pickle.

He then added pumpkins to the mix on 30 acres of rented land and, more than 30 years ago, started selling them to the supermarkets. “Those were the days when you could pick up the phone and speak to the individual stores direct,” recalls David.

The festival, organised by South Holland District Council with support from Spalding Lions and the Rotary Club of Welland Centenary, was first held in 2000 and four years later earned Spalding a National Market Town Award.

“The Pumpkin Parade is one of the highlights of the year in our district and we’re looking forward to another colourful celebration of harvest time in which whole families can get involved,” says district council deputy leader, councillor Nick Worth.